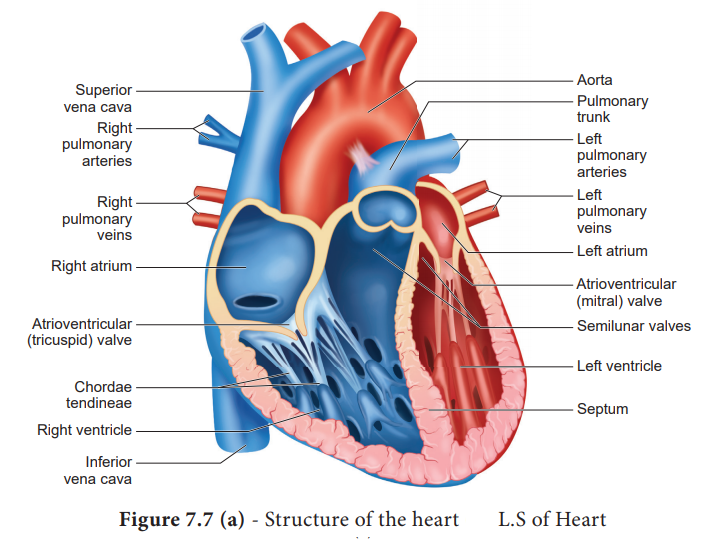 Human heart is made of special type of muscle called the cardiac muscle.

The structure of the heart was described by Raymond de viessens, in 1706. Human heart is made of special type of muscle called the cardiac muscle. It is situated in the thoracic cavity and its apex portion is slightly tilted towards left. It weighs about 300g in an adult. The size of our heart is roughly equal to a closed fist. The structure of heart and the L.S of heart are shown in Figure 7.7 (a) and (b). Heart is divided into four chambers, upper two small auricles or atrium and lower two large ventricles. The walls of the ventricles are thicker than the auricles due to the presence of -papillary muscles. The heart wall is made up of three layers, the outer epicardium, middle myocardium and inner endocardium. The space present between the membranes is called pericardial space and is filled with pericardial fluid. 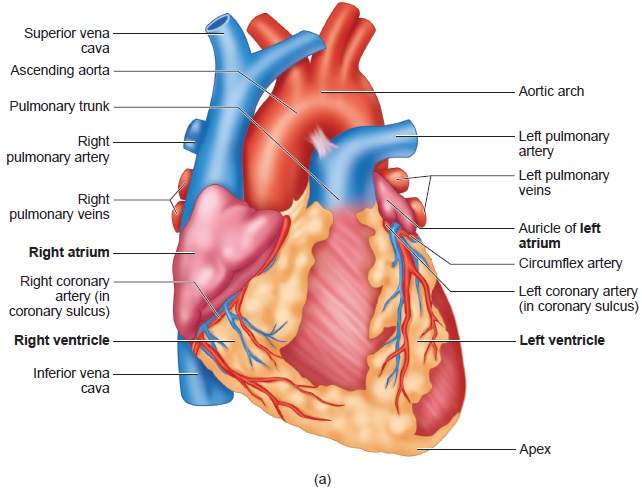 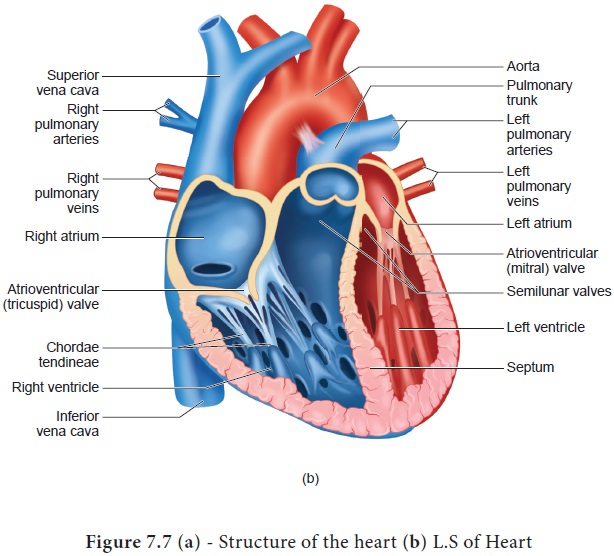 The two auricles are separated by inter auricular septum and the two ventricles are separated by inter ventricular septum The separation of chambers avoids mixing of oxygenated and deoxygenated blood. The auricle communicates with the ventricle through an opening called auriculo ventricular aperture which is guarded by the auriculo ventricular valves. The opening between the right atrium and the right ventricle is guarded by the tricuspid valve (three flaps or cusps), whereas a bicuspid (two flaps or cusps) or mitral valve guards the opening between the left atrium and left ventricle. The valves of the heart allows the blood to flow only in one direction, i.e., from the atria to the ventricles and from the ventricles to the pulmonary artery or the aorta. These valves prevent backward flow of blood.

The opening of right and left ventricles into the pulmonary artery and aorta are guarded by aortic and pulmonary valves and are called semilunar valves. Each semilunar valve is made of three half-moon shaped cusps. The myocardium of the ventricle is thrown into irregular muscular ridges called trabeculae corneae. The trabeculae corneae are modified into chordae tendinae. The opening and closing of the semilunar valves are achieved by the chordae tendinae. The chordae tendinae are attached to the lower end of the heart by papillary muscles. Heart receives deoxygenated blood from various parts of the body through the inferior venacava and superior venacava which open into the right auricle. Oxygenated blood from lungs is drained into the left auricle through four pulmonary veins.

1. Origin and conduction of heart beat

The heart in human is myogenic (cardiomyocytes can produce spontaneous rhythmic depolarisation that initiates contractions). The sequence of electrical conduction of heart is shown in Figure 7.8. The cardiac cells with fastest rhythm are called the Pacemaker cells, since they determine the contraction rate of the entire heart. These cells are located in the right sinuatrial (SA) node/ Pacemaker. On the left side of the right atrium is a node called auriculoventricular node (AV node). 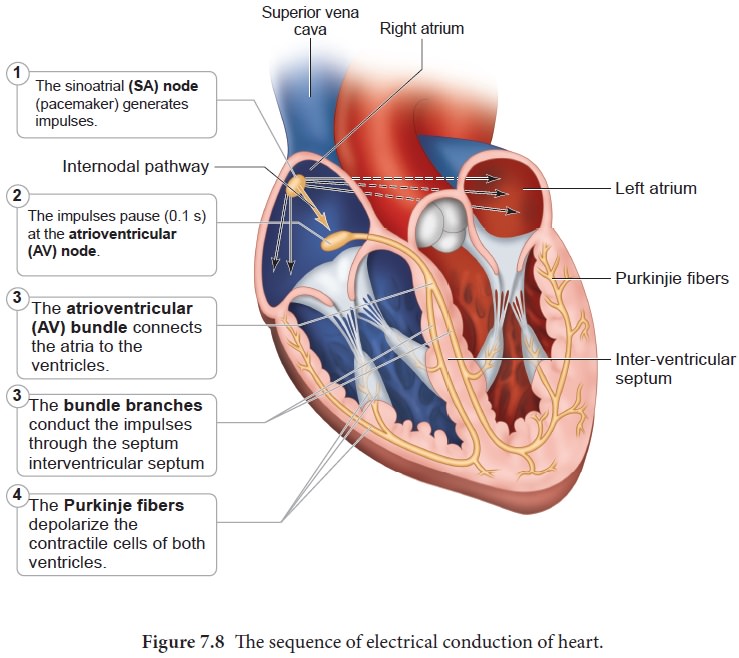 Two special cardiac muscle fibres originate from the auriculo ventricular node and are called the bundle of His which runs down into the interventricular septum and the fibres spread into the ventricles. These fibres are called the Purkinje fibres.

PHASE 2: Atrial systole - The atria contracts while the ventricles are still relaxed. The contraction of the auricles pushes maximum volume of blood to the ventricles until they reach the end diastolic volume (EDV). EDV is related to the length of the cardiac muscle fibre. More the muscle is stretched, greater the EDV and the stroke volume.

PHASE 4: Ventricular systole (ventricular ejection) - Increased ventricular pressure forces the semilunar valves to open and blood is ejected out of the ventricles without backflow of blood. This point is the end of systolic volume (ESV).

PHASE 5: (Ventricular diastole) -The ventricles begins to relax, pressure in the arteries exceeds ventricular pressure, resulting in the closure of the semilunar valves. The heart returns to phase 1 of the cardiac cycle.

The amount of blood pumped out by each ventricle per minute is called cardiac output(CO). It is a product of heart rate (HR) and stroke volume (SV). Heart rate or pulse is the number of beats per minute. Pulse pressure = systolic pressure– diastolic pressure. Stroke volume (SV) is the volume of blood pumped out by one ventricle with each beat. SV depends on ventricular contraction. CO = HR X SV. SV represents the difference between EDV (amount of blood that collects in a ventricle during diastole) and ESV (volume of blood remaining in the ventricle after contraction). SV = EDV - ESV. According to Frank – Starling law of the heart, the critical factor controlling SV is the degree to which the cardiac muscle cells are stretched just before they contract. The most important factor stretching cardiac muscle is the amount of blood returning to the heart and distending its ventricles, venous return. During vigorous exercise, SV may double as a result of venous return. Heart’s pumping action normally maintains a balance between cardiac output and venous return. Because the heart is a double pump, each side can fail independently of the other. If the left side of the heart fails, it results in pulmonary congestion and if the right side fails, it results in peripheral congestion. Frank – Starling effect protects the heart from abnormal increase in blood volume.

An electrocardiogram (ECG) records the electrical activity of the heart over a period of time using electrodes placed on the skin, arms, legs and chest. It records the changes in electrical potential across the heart during one cardiac cycle. The special flap of muscle which initiates the heart beat is called as sinu-auricular node or SA node in the right atrium. It spreads as a wave of contraction in the heart. The waves of the ECG are due to depolarization and not due to contraction of the heart. This wave of depolarisation occurs before the beginning of contraction of the cardiac muscle. A normal ECG shows 3 waves designated as P wave, QRS complex and T wave as shown in Figure 7.9 and the stages of the ECG graph are shown in Figure 7.10. 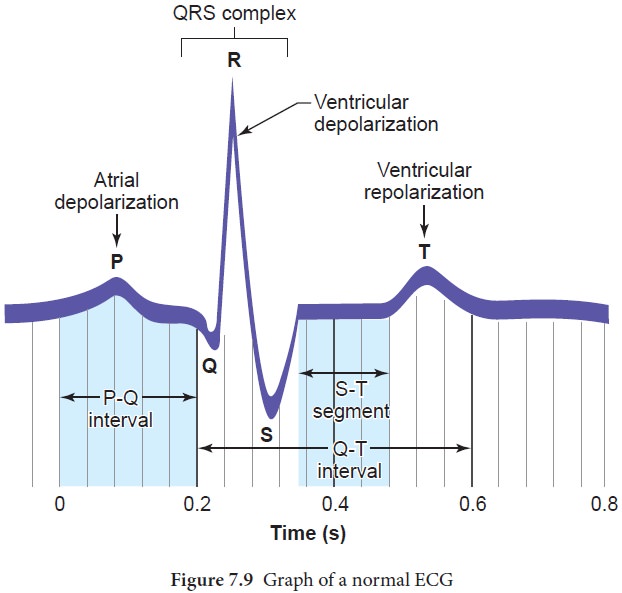 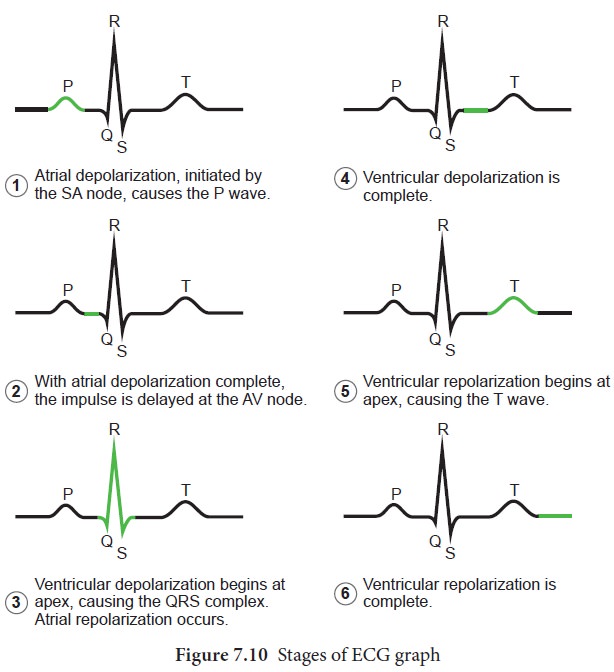 It is a small upward wave and indicates the depolarisation of the atria. This is the time taken for the excitation to spread through atria from SA node. Contraction of both atria lasts for around 0.8-1.0 sec.

It lies between the QRS complex and T wave. It is the time during which all regions of the ventricles are completely depolarised and reflects the long plateau phase before repolarisation. In the heart muscle, the prolonged depolarisation is due to retardation of K+ efflux and is responsible for the plateau. The ST segment lasts for 0.09 sec.