Structure and Types of chromosome 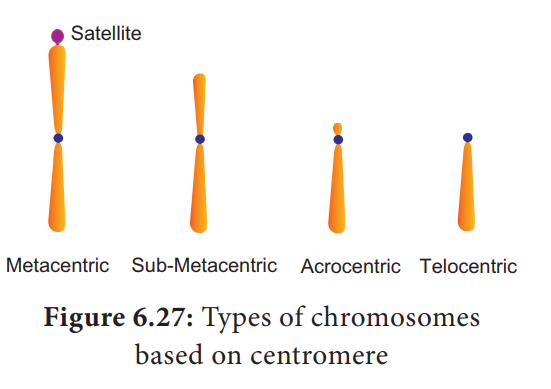 The chromosomes are composed of thread like strands called chromatin which is made up of DNA, protein and RNA.

Strasburger (1875) first reported its present in eukaryotic cell and the term ‘chromosome’ was introduced by Waldeyer in 1888. Bridges (1916) first proved that chromosomes are the physical carriers of genes. It is made up of DNA and associated proteins. 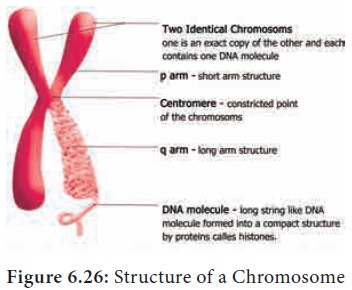 A satellite or SAT Chromosome are short chromosomal segment or rounded body separated from main chromosome by a relatively elongated secondary constriction. It is a morphological entity in certain chromosomes.

Chromonema fiber: It is a chromatin fibre, 100 – 130 nm in diameter thought to be an element of higher order packing of chromatin within chromosome. During prophase the chromosomal material becomes visible as very thin filaments called chromonemata, which is called as chromatids in early stages of condensation. Chromatid and chromonema are the two names for the same structure a single linear DNA molecule with its associated proteins.

Chromomeres: Chromomeres are bead like accumulations of chromatin material which are visible along interphase chromosomes. They can be seen in polytene chromosomes. At metaphase they are not visible. 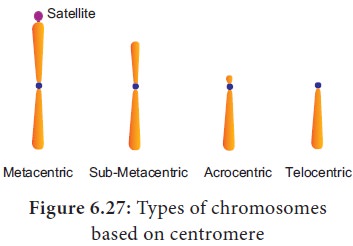 Telomere is the terminal part of chromosome. It offers stability to the chromosome. DNA of the telomere has specific sequence of nucleotides. Telomere in all eukaryotes are composed of many repeats of short DNA sequences (5’TTAGGG3’ sequence in Neurospora crassa and human beings). Maintenance of telomeres appears to be an important factor in determining the life span and reproductive capacity of cells so studies of telomeres and telomerase have the promise of providing new insights into conditions such as ageing and cancer. Telomeres prevents the fusion of chromosomal ends with one another.

Holocentric chromosomes have centromere activity distributed along the whole surface of the chromosome during mitosis. Holocentric condition can be seen in Caenorhabditis elegans (nematode) and many insects. There are three types of centromere in eukaryotes. They are as follows:

Point centromere: the type of centromere in which the kinetochore is assembled as a result of protein recognition of specific DNA sequences. Kinetochores assembled on point centromere bind a single microtubule. It is also called as localized centromere. It occurs in budding yeasts

Holocentromere- The microtubules bind all along the mitotic chromosome. Example: Caenorhabditis elegans (nematode) and many insects.

Based on the functions of chromosome it can be divided into autosomes and sex chromosomes.

Polytene chromosomes observed in the salivary glands of Drosophila (fruit fly) by C.G. Balbiani in 1881. In larvae of many flies, midges (Dipthera) and some insects the interphase chromosomes duplicates and reduplicates without nuclear division. A single chromosome which is present in multiple copies form a structure called polytene chromosome which can be seen in light microscope. They are genetically active. There is a distinct alternating dark bands and light inter-bands. About 95% of DNA are present in bands and 5% in inter-bands. The polytene chromosome has extremely large puff called Balbiani rings which is seen in Chironomous larvae. It is also known as chromosomal puff. Puffing of bands are the sites of intense RNA synthesis. As this chromosome occurs in the salivary gland it is known as salivary gland chromosomes. Polyteny is achieved by repeated replication of chromosomal DNA several times without nuclear division and the daughter chromatids aligned side by side and do not separate (called endomitosis). Gene expression, transcription of genes and RNA synthesis occurs in the bands along the polytene chromosomes. Maternal and paternal homologues remain associated side by side is called somatic pairing.

Lampbrush chromosomes occur at the diplotene stage of first meiotic prophase in oocytes of an animal Salamandar and in giant nucleus of the unicellular alga Acetabularia. It was first observed by Flemming in 1882. The highly condensed chromosome forms the chromosomal axis, from which lateral loops of DNA extend as a result of intense RNA synthesis.