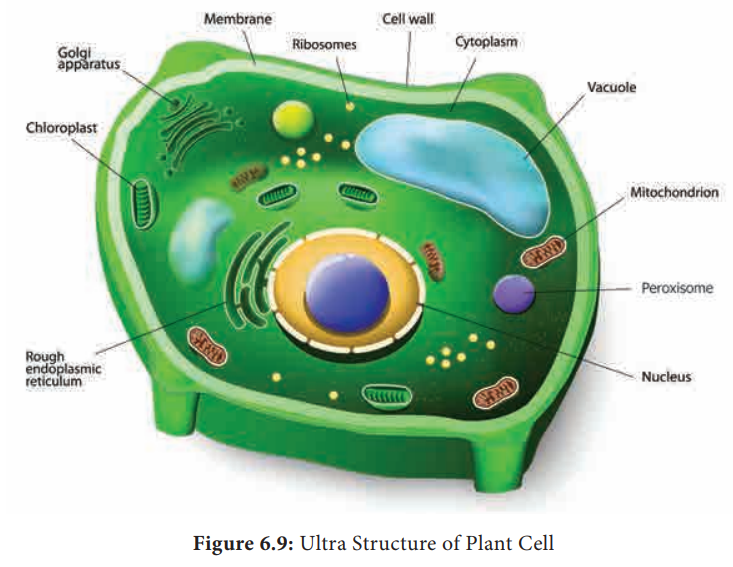 Botany : Cell: The Unit of Life

The system of membranes in a eukaryotic cell, comprising the plasma membrane, nuclear membrane, endoplasmic reticulum, golgi apparatus, lysosomes and vacuolar membranes (tonoplast). Endomembranes are made up of phospholipids with embedded proteins that are similar to cell membrane which occur within the cytoplasm. The endomembrane system is evolved from the inward growth of cell membrane in the ancestors of the first eukaryotes (Figure 6.15). 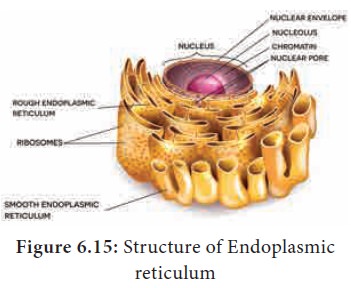 1          Cisternae are long, broad, flat, sac like structures arranged in parallel bundles or stacks to form lamella. The space between membranes of cisternae is filled with fluid.

In 1898, Camillo Golgi visualized a netlike reticulum of fibrils near the nucleus, were named as Golgi bodies. In plant cells they are found as smaller vesicles termed as dictyosomes. Golgi apparatus is a stack of flat membrane enclosed sacs. It consist of cisternae, tubules, vesicles and golgi vacuoles. In plants the cisternae are 10-20 in number placed in piles separated from each other by a thin layer of inter cisternal cytoplasm often flat or curved. Peripheral edge of cisternae forms a network of tubules and vesicles. Tubules interconnect cisternae and are 30-50nm in dimension. Vesicles are large round or concave sac. They are pinched off from the tubules.They are smooth/secretary or coated type. Golgi vacuoles are large spherical filled with granular or amorphous substance, some function like lysosomes. The Golgi apparatus compartmentalises a series of steps leading to the production of functional protein. 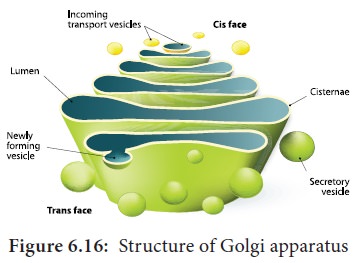 Small pieces of rough endoplasmic reticulum are pinched off at the ends to form small vesicles. A number of these vesicles then join up and fuse together to make a Golgi body. Golgi complex plays a major role in post translational modification of proteins and glycosidation of lipids (Figure 6.16 and 6.17). 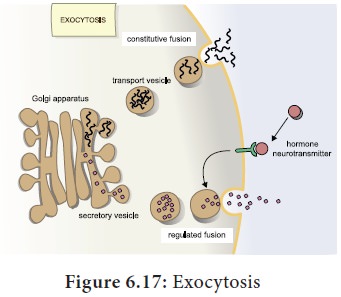 ·           Glycoproteins and glycolipids are produced

·           Secretion of Carbohydrates for the formation of plant cell walls and insect cuticles.

·           Zymogen granules (proenzyme/pre-cursor of all enzyme) are synthesised.

It was first observed by A. Kolliker (1880). Altmann (1894) named it as Bioplasts. Later Benda (1897, 1898), named as mitochondria. They are ovoid, rounded, rod shape and pleomorphic structures. Mitochondrion consists of double membrane, the outer and inner membrane. The outer membrane is smooth, highly permeable to small molecules and it contains proteins called Porins, which form channels that allows free diffusion of molecules smaller than about 1000 daltons and the inner membrane divides the mitochondrion into two compartments, outer chamber between two membranes and the inner chamber filled with matrix.

The inner membrane is convoluted (infoldings), called crista (plural: cristae). Cristae contain most of the enzymes for electron transport system. Inner chamber of the mitochondrion is filled with protein aceous material called mitochondrial matrix. The inner membrane consists of stalked particles called elementary particles or Fernandez Moran particles, F1 particles or Oxysomes. Each particle consists of a base, stem and a round head. In the head ATP synthase is present for oxidative phosphorylation. Inner membrane is impermeable to most ions, small molecules and maintains the proton gradient that drives oxidative phosphorylation (Figure 6.18). 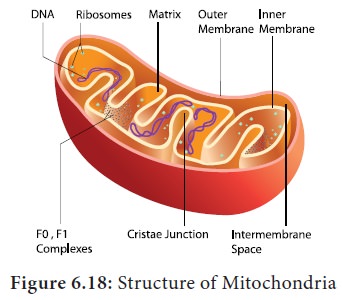 All the enzymes of Kreb’s cycle are found in the matrix except succinate dehydrogenase. Mitochondria consist of circular DNA and 70S ribosome. They multiply by fission and replicates by strand displacement model. Because of the presence of DNA it is semi-autonomous organelle. Unique characteristic of mitochondria is that they are inherited from female parent only. Mitochondrial DNA comparisons are used to trace human origins. Mitochondrial DNA is used to track and date recent evolutionary time because it mutates 5 to 10 time faster than DNA in the nucleus.

The term plastid is derived from the Greek word Platikas (formed/moulded) and used by A.F.U. Schimper in 1885. He classified plastids into following types according to their structure, pigments and function. Plastids multiply by fission. 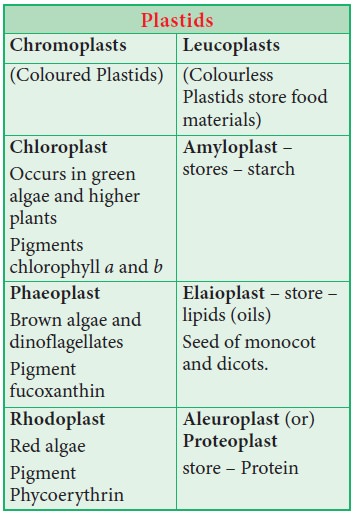 According to Schimper, different kind of plastids can transform into one another. 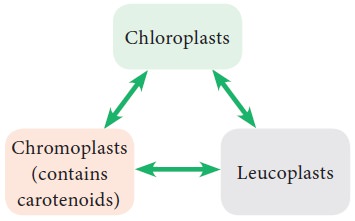 Grana (singular: Granum) are formed when many of these thylakoids are stacked together like pile of coins. Light is absorbed and converted into chemical energy in the granum, which is used in stroma to prepare carbohydrates. Thylakoid contain chlorophyll pigments. The chloroplast contains osmophilic granules, 70s ribosomes, DNA (circular and non histone) and RNA. These chloroplast genome encodes approximately 30 proteins involved in photosynthesis including the components of photosystem I & II, cytochrome bf complex and ATP synthase. One of the subunits of Rubisco is encoded by chloroplast DNA. It is the major protein component of chloroplast stroma, single most abundant protein on earth. The thylakoid contain small, rounded photosynthetic units called quantosomes. It is a semi-autonomous organelle and divides by fission (Figure 6.19).

Ribosomes were first observed by George Palade (1953) as dense particles or granules in the electron microscope. Electron microscopic observation reveals that ribosomes are composed of two rounded sub units, united together to form a complete unit. Mg2+ is required for structural cohesion of ribosomes. Biogenesis of ribosome are denova formation, auto replication and nucleolar origin. Each ribosome is made up of one small and one large sub-unit Ribosomes are the sites of protein synthesis in the cell. Ribosome is not a membrane bound organelle (Figure 6.20). 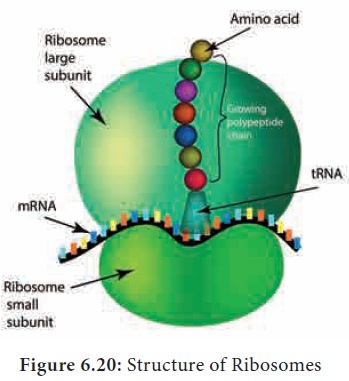 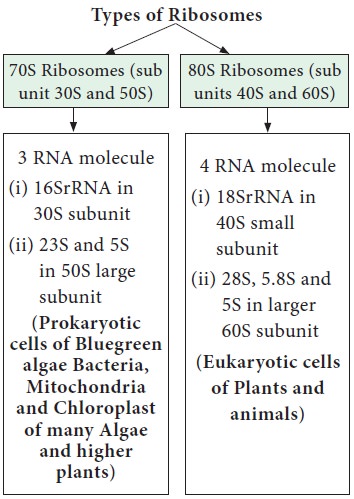 Lysosomes were discovered by Christian de Duve (1953), these are known as suicidal bags. They are spherical bodies enclosed by a single unit membrane. They are found in eukaryotic cell. Lysosomes are small vacuoles formed when small pieces of golgi body are pinched off from its tubules.

They contain a variety of hydrolytic enzymes, that can digest material within the cell. The membrane around lysosome prevent these enzymes from digesting the cell itself (Figure 6.21). 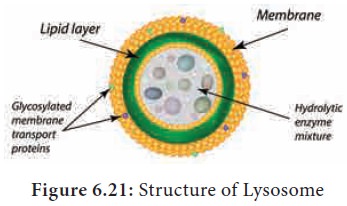 ·           Autophagy: During adverse condition they digest their own cell organelles like mitochondria and endoplasmic reticulum

·           Autolysis: Lysosome causes self destruction of cell on insight of disease they destroy the cells.

·           Phagocytosis: Large cells or contents are engulfed and digested by macrophages, thus forming a phagosome in cytoplasm. These phagosome fuse with lysosome for further digestion. 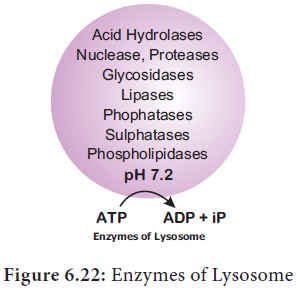 Peroxisomes were identified as organelles by Christian de Duve (1967). Peroxisomes are small spherical bodies and single membrane bound organelle. It takes part in photorespiration and associated with glycolate metabolism. In plants, leaf cells have many peroxisomes. It is also commonly found in liver and kidney of mammals. These are also found in cells of protozoa and yeast (Figure 6.23). 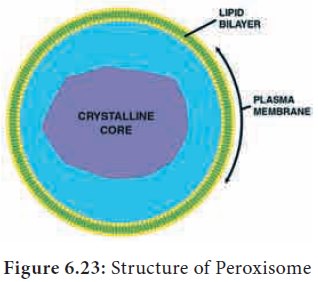 Glyoxysome was discovered by Harry Beevers (1961). Glyoxysome is a single membrane bound organelle. It is a sub cellular organelle and contains enzymes of glyoxylate pathway. β-oxidation of fatty acid occurs in glyoxysomes of germinat-ing seeds Example: Castor seeds.

It is spherical in shape and enclosed by single unit membrane. Example: Storage of fat in the endosperm cells of oil seeds.

Centriole consist of nine triplet peripheral fibrils made up of tubulin. The central part of the centriole is called hub, is connected to the tubules of the peripheral triplets by radial spokes (9+0 pattern). The centriole form the basal body of cilia or flagella and spindle fibers which forms the spindle apparatus in animal cells. The membrane is absent in centriole (non-membranous organelle) (Figure 6.24). 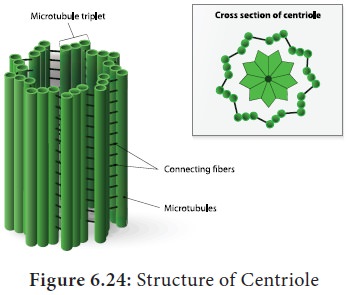 In plant cells vacuoles are large, bounded by a single unit membrane called Tonoplast. The vacuoles contain cell sap, which is a solution of sugars, amino acids, mineral salts, waste chemical and anthocyanin pigments. Beetroot cells contains anthocyanin pigments in their vacuoles. Vacuoles accumulate products like tannins. The osmotic expansion of a cell kept in water is chiefly regulated by vacuole and the water enters the vacuoles by osmosis.

The major function of plant vacuole is to maintain water pressure known as turgor pressure , which maintains the plant structure. Vacuoles organises itself into a storage/sequestration compartment. Example: Vacuoles store, most of the sucrose of the cell.

i.  Sugar in Sugar beet and Sugar cane.

iv.  Flavonoid pigment Cyanidin 3 rutinoside in the petals of Antirrhinum.

The cell inclusions are the non-living materials present in the cytoplasm. They are organic and inorganic compounds.