In 1833, German botanist Matthias Schleiden and German zoologist Theodor Schwann proposed that all plants and animals are composed of cells and that cells were the basic building blocks of life.

These observations led to the formulation of modern cell theory.

·           Cells contains genetic material, which is passed on from parents to daughter cells.

Viruses are puzzle in biology. Viruses, viroids and prions are the exception to cell theory. They lack protoplasm, the essential part of the cell and exists as obligate parasites which are sub-cellular in nature.

The features of cell doctrine are as follows:

·           Cell is a structural and functional unit of all living organisms.

·           A cell contains hereditary information which is passed on from cell to cell during cell division.

·           All the cells are basically the same in chemical composition and metabolic activities.

Max Schultze (1861) established similarity between Protoplasm and Sarcode and proposed a theory which later on called “Protoplasm Theory” by O. Hertwig (1892). Huxley (1868) proposed Protoplasm as a “physical basis of life”.

Protoplasm as a Colloidal System

Protoplasm is a complex colloidal system which was suggested by Fisher in 1894 and Hardy in 1899. It is primarily made of water contents and various other solutes of biological importance such as glucose, fatty acids, amino acids, minerals, vitamins, hormones and enzymes.

The protoplasm exist either in semisolid (jelly-like) state called ‘gel᾿ due to suspended particles and various chemical bonds or may be liquid state called ‘sol᾿. The colloidal protoplasm which is in gel form can change into sol form by solation and the sol can change into gel by gelation. These gel- sol conditions of colloidal system are prime basis for mechanical behaviour of cytoplasm.

2)       It is a crystal colloid solution which is a mixture of chemical substances forming crystalloid i.e. true solution (sugars, salts, acids, bases) and others forming colloidal solution (Proteins and lipids)

6)       Protoplasm is neither a good nor a bad conductor of electricity. It forms a delimiting membrane on coming in contact with water and solidifies when heated.

7)       Cohesiveness: Particles or molecules of protoplasm are adhered with each other by forces, such as Van der Waal’s bonds, that hold long chains of molecules together. This property varies with the strength of these forces.

8)       Contractility: The contractility of proto­ plasm is important for the absorption and removal of water especially stomatal operations.

9)       Surface tension: The proteins and lipids of the protoplasm have less surface tension, hence they are found at the surface forming the membrane. On the other hand the chemical substances (NaCl) have high surface tension, so they occur in deeper parts of the cell protoplasm.

The shape of cell vary greatly from organism to organism and within the organism itself. In bacteria cell shape vary from round (cocci) to rectangular (rod).

In virus, shape of the envelope varies from round to hexagonal or ‘T’ shaped. In fungi, globular to elongated cylindrical cells and the spores of fungi vary greatly in shape. In plants and animals cells vary in shape according to cell types such as parenchyma, mesophyll, palisade, tracheid, fiber, epithelium and others (Figure 6.6). 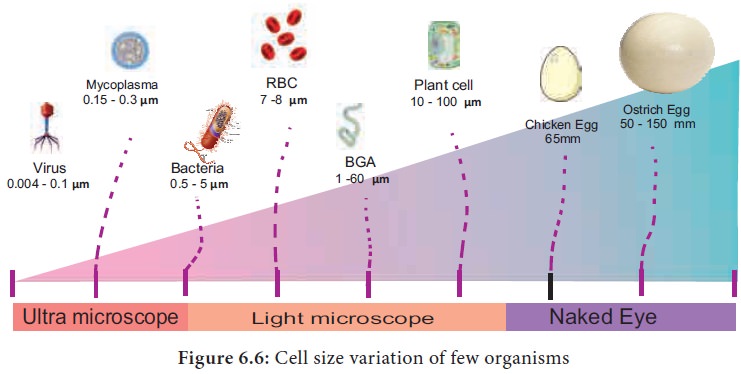