Plants are sessile – they cannot move to avoid adverse environments or predators. They show adaptations to permit survival without movement. These include plasticity of development, ability to regenerate new organs and a range of defences to deter herbivory and pathogenesis.
STRESS AVOIDANCE AND ADAPTATION

Plants are sessile – they cannot move to avoid adverse environments or predators. They show adaptations to permit survival without movement. These include plasticity of development, ability to regenerate new organs and a range of defences to deter herbivory and pathogenesis.

Plants deter herbivores by physical barriers such as a cellulose cell wall, waxy cuticle, lignification, hairs and stinging hairs, and also by chemical deterrents including compounds which make the plant unpalatable or poisonous or disrupt digestion.

Many nutrient ions become toxic at high concentrations, others are almost universally toxic. Plants tolerate toxicity by one of four mechanisms: tolerance permits growth and metabolism in the presence of the toxin; exclusion where barriers at the root surface or root/shoot interface prevent uptake; amelioration, the dilution or chelation of the toxin; and phenological escape, where growth only occurs in favorable seasons.

Gaseous toxins include oxides of sulfur and nitrogen and ozone. Gaseous pollutants have the direct effects of cell and membrane damage and the indirect effects of soil acidification and inhibition of nutrient uptake.

Salinity causes both toxicity and osmotic problems. Most plants have little or no salt tolerance. Salt tolerant species may produce non-protein amino acids as compatible solutes to overcome osmotic problems, some form salt glands that excrete the salt.

The vegetative form of many higher plants is sessile; they cannot respond to changing environments by moving to new locations. Therefore, they must be able to tolerate adverse conditions. The range of adaptations varies between species: some characteristics are shown by almost all plants, but many others are only present in a few plants that tolerate particular environments. Plant devel-opment is plastic; in other words, it is not predetermined to a rigid path as mammalian development is. The presence of persistent embryonic tissue (meristems;) and the fact that new meristems can be induced, means that plants can respond to a changing environment, wounding, etc, by altered growth. The form of growth may also alter, for instance to a lower, more compact form in response to high wind speeds. Plant hormones  are essential to plasticity as they integrate environmental stimuli with development.

Plants are exposed to many herbivores, ranging from mammals to insects. Defenses include:

Chemical defenses. Formation of toxic or unpalatable secondary products (Table 1;). Many of the compounds indicated are synthesized rapidly in response to herbivory or pathogen attack and plants may acquire resistance to further attack. Salicylic acid is produced by infected tissue and inducesdefense genes elsewhere in the plant. Fragments of the pathogen and the plant cell wall produced during the initial stages of infection by hydrolytic enzymes from the pathogen, called elicitors, also act to initiate cell signaling pathways resulting in the activation of defense genes, including those for the enzymes responsible for the production of many of the compounds included in Table 1. 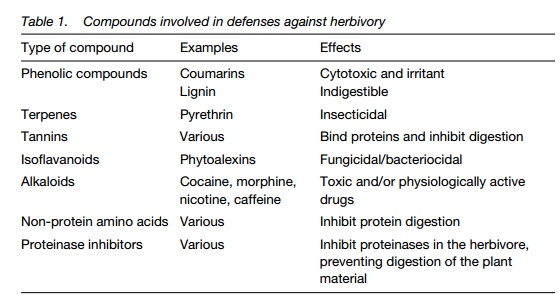 Most nutrient ions, at high enough concentrations, become toxic to plant growth. Others, such as Cd and Al are almost universally toxic, even at relatively low concentrations. Table 2 lists some major toxic ions in soil. Toxic ion concentrations may arise when the toxin is added to the soil (e.g. by atmospheric pollution or in industrial waste) or when soil conditions change (e.g. acidification will release Al from non-toxic complexes to free solution).

Plants may respond to the presence of a toxic ion in a number of ways. For many plants, severely inhibited growth and death will occur, but others show adaptations that permit them to survive. Such plants may only grow slowly, but because they can occupy an environment that other plants cannot, they are able to benefit from that lack of competition. Plants may tolerate toxicity in one of four ways presented in Table 3. Hyper-accumulator species that are able to tolerate and accumulate large amounts of toxic ions are considered (Bioremediation).

Gaseous toxicity may occur when plants are exposed to toxic gases from industry or volcanoes. Pollutants include ozone, sulphur dioxide,nitrogenoxides and carbon monoxide. Their effects may be direct, e.g. inhibited stomatalaction, damage to surfaces, inhibition of enzymes; or indirect, e.g. altered soil properties preventing nutrient uptake. Table 4 gives the direct and indirect effects of some major atmospheric pollutants.

Adaptations which permit normal growth and metabolism in the presence of the toxin, even when in the tissues. This includes modified enzymes which are not inhibited by the toxin. Species which take up the toxin are termed includes

The toxic ion is not taken up by the plant. This may be because of an effective barrier at the root surface (through the possession of very specific ion transport systems) or internally, particularly at the root–shoot interface. Species which take up the toxin into the root tissue and prevent it from moving to the shoot (e.g. at the root endodermis) are termed ‘includer/excluders’

A species may escape a seasonal stress by growing in the other seasons when the stress is minimal, for instance species growing in zones only covered by extreme tides in a salt marsh.

Waterlogged soils contain low concentrations of oxygen which inhibit the growth of roots. Some species of plants contain aerenchyma, gas spaces in the root which both reduce the overall root oxygen demand and may supply oxygen to the growing tip. Aerenchyma may be formed constitutively, i.e. is always present, for instance in paddy rice. In other species, such as maize, it is induced by ethylene, produced in response to low oxygen. It is formed by the death of cells of the root cortex. Cells at the meristem do not die, but respond to lack of oxygen by the induction of anaerobic metabolism (fermentation). This involves induction of a number of enzymes, including alcohol dehydrogenase, which removes ethanol, a toxic product of fermentation, from the tissues. 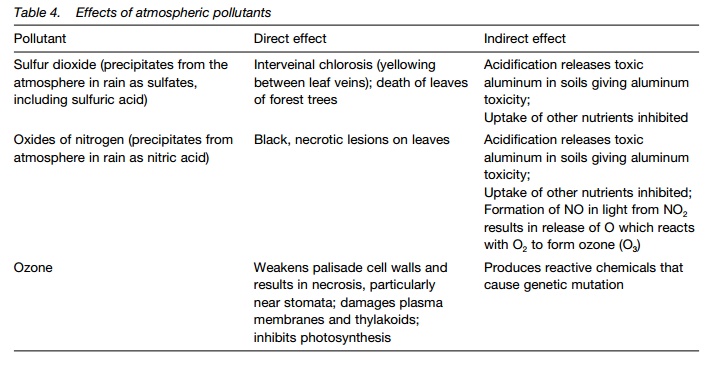 Toxicity due to NaCl has considerable impact on agriculture. Both Na+ and Cl– are toxic and occur in excess where land is exposed to sea water, in many aridzones and on irrigated land where evaporation exceeds precipitation or irrigation.Declining water tables due to deforestation and intensive agriculture andresulting salinization are an increasing agricultural problem.

The chief causes of damage by salt are: osmotic stress and dehydration; inability to regulate stomata (as Na+ replaces K+); nutrient ion deficiency; and Cl– toxicity. Plants show a wide range of salt tolerance, from glycophytes, able to tolerate small amounts of NaCl, to halophytes able to tolerate ³ 500 mM. Plants able to grow in high salt conditions show a number of adaptations which are summarized in Table 5. 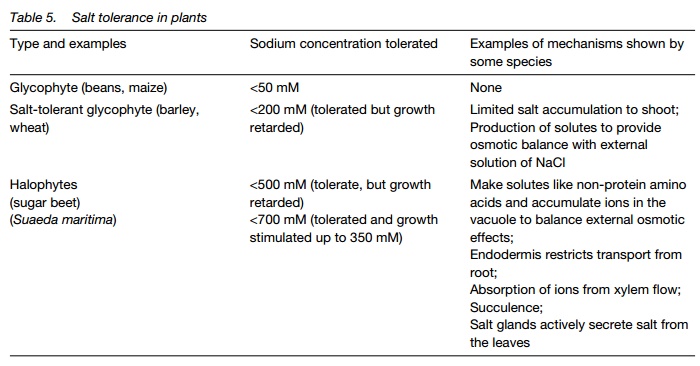