Nyctinasty is movement of leaves or petals in a diurnal rhythm resulting in opening during daytime and closure at night. Movement results from turgor changes in the motor cells of specialized pulvini, where the flexor cells are turgid while the extensors are not and vice versa. The movements frequently occur in a circadian rhythm.

Seismonastic movements are rapid movements of leaves and petioles in response to touch. They involve turgor changes in specialized pulvini triggered by a depolarization of the cell membrane propagated through the phloem tissue.

Nastic responses are plant movements in response to stimuli in which the direction of movement is not related to the direction of the stimulus; this differentiates them from the tropisms. Most nastic movements do not involve growth (i.e. they are not permanent), though the terms epinasty andhyponasty are used to describe bending of an organ which does involve growth. The others are commonly also called turgor movements, as the mechanism of movement is usually a change in turgor of the tissue involved.

A wide range of nastic movements have been described which include:

●epinasty, downward curvature of an organ;

●hyponasty, upward bending of an organ;

●thigmonasty, curling in response to contact with a support. Tendrils of some plants curl around supports with which they contact;

●seismonasty, rapid movements in response to touch. The leaves of the sensitive plant, Mimosa pudica, fold rapidly when touched;

●nyctinasty, ‘sleep’ movements of petals and leaves in which leaves fold or close at night and open again next morning.

Flowers of many species close at night and leaves of some, including the prayerplant (Maranta), Coleus and French bean (Vicia faba) fold together at night andopen out in daylight. This rhythm is maintained by an endogenous clock, as itpersists even when the plant is placed in continuous light or continuous darknessfor several days. The rhythm is therefore said to be circadian – an endogenousrhythm of about 24 h reinforced by regular exposure to light and darkness.

Leaf movement occurs at a hinge region in the petiole, the pulvinus. Pulvini appear as swellings in the petiole that contain motor cells surrounding central vascular tissue which drive the movement. Motor cells may be divided into two groups: extensors and flexors (Fig. 1) which lie opposite to one another. Turgor driven swelling and shrinkage results in movement; thus when the extensors are fully turgid, the flexors are flaccid and vice versa. These turgor changes are driven by movement of K+ and associated cations (Cl–, organic acids). The ion movements are driven by the trans-membrane electrical gradient set up by the plasma membrane proton pump and occur through ion channels in the plasma membrane. 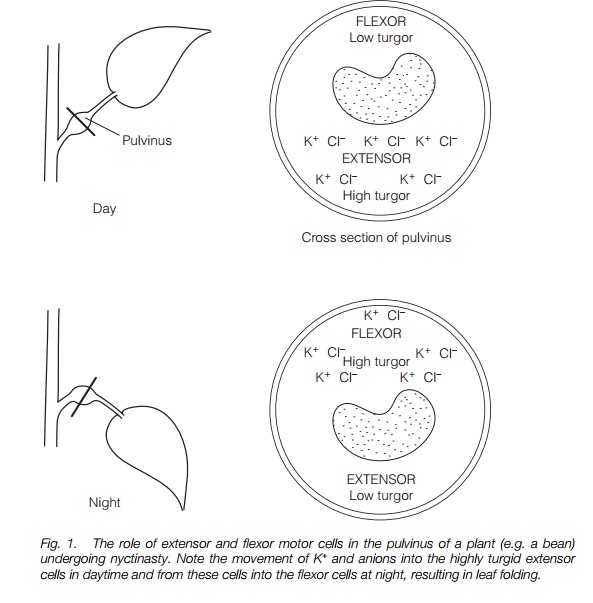 While the mechanism of movement is well understood, the mechanism governing the circadian rhythm is less so, although it is known that phytochrome is involved in entraining (‘setting’) the endogenous clock to coincide with light and dark in the 24 h period. It is likely that intracellular messengers are also involved. Understanding the clock is likely to be achieved through analysis of mutants of arabidopsis which show altered circadian rhythms.

Seismonasty is most dramatically seen in sensitive plants, such as Mimosa pudica, in which touch will cause leaflets and then leaves to progressivelycollapse and fold (Fig. 2). It is believed that this deters herbivory, as insects either fall off, or are presented with a less palatable meal. The mechanism of folding is identical to that of nyctinasty – turgor changes in motor cells in pulvini in the petioles of the leaves. However, the trigger is different and a circadian rhythm is not involved. As the leaf collapse is progressive, i.e. it occurs near the point touched initially, then spreads to other pulvini as the leaf is touched more vigorously, there must be a mechanism for the signal to be transmitted across the leaf. An electrical signal has been measured flowing from the point of contact to the petiole. This resembles the action potential of a nerve and may involve the opening and closing of potassium channels that depolarize the plasma membrane of the phloem. 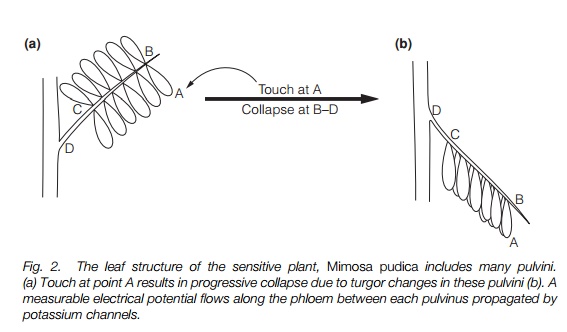