Abscission is a controlled process resulting in the removal of plant parts either when they have completed their development or function (e.g. flowers) or in response to adverse conditions (e.g. leaves).

Abscission is a controlled process resulting in the removal of plant parts either when they have completed their development or function (e.g. flowers) or in response to adverse conditions (e.g. leaves). The process permits the plant to achieve efficient fruit dispersal and to survive an unfavorable period, particularly drought.

Abscission describes the removal of plant parts (leaves, flowers, fruit) either in response to environmental stimuli or at specified points in the life cycle in a controlled and ordered manner. In different species, abscission permits survival in temporary adverse conditions, e.g. drought, cold, survival during regular or adverse conditions, fruit and seed dispersal; shedding of damaged organs or those which have completed development such as flowers and fruit.

Leaf abscission occurs in a number of circumstances. Most familiar in temperate climates is the abscission of leaves before winter in perennial deciduous species. Many of the nutrients within the leaf are reabsorbed by the plant and removal of the leaf reduces water loss during the winter when photosynthetic gain would be low and leaf damage (due to frost or pathogens) great. Controlled loss of the leaf and the sealing of the point of separation prevents pathogens from penetrating. Leaf abscission also occurs in many species in drought, thus reducing water loss and enhancing survival. It occurs in older leaves in plants in temperate zones throughout the growing season, and throughout the year in the tropics.

Fruit and flower abscission occur at the end of their development. Loss of the remains of the flower prevents necrosis and pathogen accumulation at the plant surface and removes organs no longer needed after pollen shedding or when no possibility of pollination remains. Fruit abscission results in the dispersal of seeds.

The abscission zone is recognizable as a slight swelling in the petiole or stalk attaching the organ to the plant (Fig. 1). Within it, one or two layers of cells, the abscission layer, forms as the zone develops. These layers become sensitive to ethylene and develop the secretory machinery necessary to deposit cell-walldigesting enzymes into the wall space between them. It is the separation of these layers that results in abscission at a well-defined location resulting in a ‘clean break’ of minimal surface area.

Young leaves produce large amounts of auxin; this diminishes as the leaf matures, or if it is damaged (Fig. 1). Drought (wilting), damage, short days or declining temperatures stimulate ethylene production and diminish auxin production in the leaf. With high auxin and low ethylene, the cells of the abscission zone remain inactive. As the leaf production of auxin diminishes, the abscission zone becomes sensitive to ethylene and begins to develop. Finally, when ethylene levels are sufficient, the layer is activated and enzymes (e.g. polygalacturonases, cellulases) are secreted and digest the cell walls holding the leaf to the stem. The break is then sealed preventing water loss and pathogen penetration. While abscisic acid (ABA;) was named because of a supposed involvement in abscission, it is now known that it acts only indirectly in this process by accelerating ethylene production. 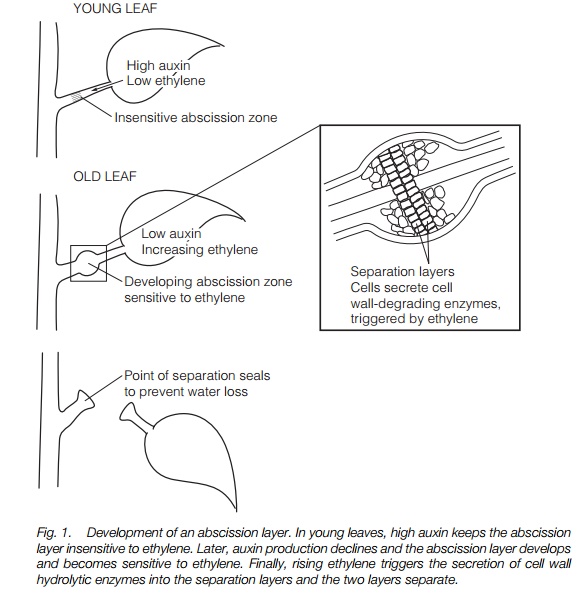