Photomorphogenesis is the direct influence of light on growth and development. It involves responses to certain wavelengths of light which are perceived by photoreceptor pigments.

Photomorphogenesis is the direct influence of light on growth and development. It involves responses to certain wavelengths of light which are perceived by photoreceptor pigments.

Photoperiodism is the response of a plant to length of day. It governs processes such as dormancy and flowering. Species may be either long day, short-day or day-neutral in their response to day length.

Phytochrome is a photoreceptor protein. It is synthesized as Pr that absorbs red light (666 nm) and is converted to Pfr which absorbs far-red light (720 nm), and initiates cell signaling events leading to photomorphogenesis. Many phytochrome responses initiated by red light are reversed by far-red light. Five phytochrome genes, PHYA–PHYE,

have been identified. PHYA is expressed at high levels in etiolated tissue. In red light its expression is switched off and the protein rapidly degraded. PHYB–E are constantly expressed at low levels in tissue and are involved in other phytochrome responses.

Phytochrome responses include: etiolation/de-etiolation, circadian rhythms such as leaf and petal movement, and seed germination.

Plants use light for photosynthesis. They also respond to light in other ways. For instance, a germinated seedling grows rapidly to reach light suitable for photosynthesis before its food reserves are exhausted. During this rapid elongation growth, chlorophyll and some chloroplast proteins are not synthesized and the seedling remains etiolated (pale and lacking developed chloroplasts) until light is reached. Then immediately, patterns of gene expression are initiated and the seedling begins to form mature, photosynthetically active chloroplasts and its growth form alters from rapid elongation to the production of leaves and a stem capable of supporting them. This is photomorphogenesis – change of form in response to light; there are many other examples, including seed germination (some seeds will only germinate after being exposed to red light), leaf morphology and control of flowering. Photomorphogenesis involves specific responses to certain wavelengths of light, different to those needed for photosynthesis. These are usually either responses to blue or red light; responses to blue light include growth to unilateral light (phototropism), the mechanism for which is discussed. Growth in response to red light involves the pigment phytochrome.

Photoperiodism permits seasonal responses in temperate species that are independent of temperature. Plants may be classified according to whether flowering is induced by short days (short-day plants [SDPs]), long days (long-day plants [LDPs]) or is day length independent (day-neutral species). Flowering in LDPs occurs only when day length is greater than a given value (depending on species); in SDPs when day length is less than a given value. LDPs and SDPs in fact respond to the length of the night, as introducing a brief period of illumination (a night-break) overcomes the effect of long nights. Photoperiodism results from two processes: perception of light by the photopigment phytochrome in leaves, and an endogenous circadian rhythm (see below). Genetic control of flowering has been indicated by the description of mutant LDPs which are dayneutral and mutant day-neutral plants which are SDPs.

Phytochrome is synthesized as a protein, Pr, able to absorb red light (666 nm). When it absorbs red light, it converts to a Pfr able to absorb far-red light at 730 nm (that converts it back to Pr; Fig. 1). Many phytochrome responses show ‘red–far red reversibility’ – when a process has been activated by a short period of red light, it will be stopped or reversed by a subsequent pulse of far-red light. Phytochrome is a protein made up of two identical sub-units, in total sized 250 kDa. Each monomer (sub-unit) has a pigment (chromophore) molecule attached to it through an -S- (thioether) bond to the amino acid cysteine. When the chromophore absorbs red light, its structure alters slightly (Fig. 2) and this alters the conformation of the protein initiating events which ultimately results in altered gene expression.

A multi-gene family of phytochromes has been identified in Arabidopsis, with five members, PHYA, PHYB, PHYC, PHYD andPHYE. These can be subdivided into two types of phytochrome: PHYA encodes type 1 phytochrome, which is the most abundant form in etiolated seedlings; PHYB–E encode the type II phytochrome which is synthesized at much lower rates.Transcription of thePHYA gene is regulated by negative feedback in red light(which causes the formation of Pfr); so when an etiolated seedling (with highlevels of type 1 phytochrome) is exposed to light, production of type 1 is greatlyreduced as one part of photomorphogenesis (Fig. 3). In addition, type 1 Pfrphytochrome is very sensitive to proteolysis, so the level of the protein quicklyreduces when it is not being newly synthesized. Transcription of the PHYB–E 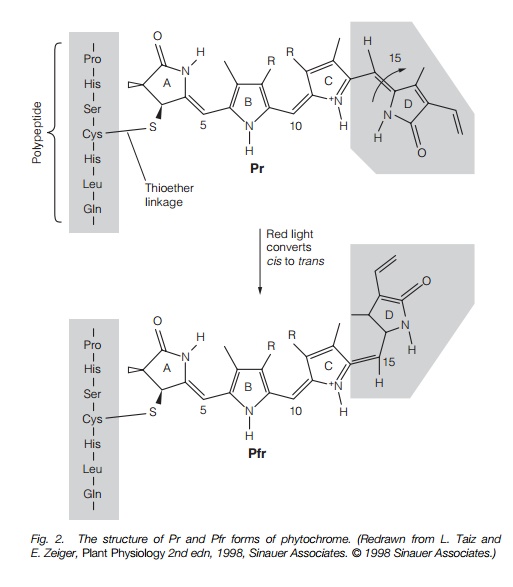 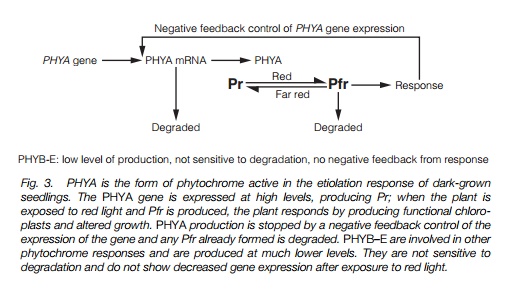 genes is not sensitive to light, and type II phytochrome is much less sensitive to proteolysis, so it remains more or less constant in the plant.

The red:far red ratio of light changes in different environments and through the day. Daylight, for instance, has an R:FR ratio of 1.19, while at sunset it is 0.96 and under a leaf canopy can be 0.1. Light intensity also varies throughout the day. Phytochrome is involved in a wide range of plant responses to light, including:

●Etiolation, in which a seedling or organ rapidly elongates without the production of chloroplasts until it receives red illumination, whereupon deetiolation occurs and functional chloroplasts are produced.

●Circadian rhythms. A number of plant processes, including metabolism and leaf positioning follow a periodic cycle of 24 h. The phytochrome response ensures synchrony of the rhythm with daylength.

●Seed germination. Many seeds are stimulated to germinate by light in a phytochrome-mediated response. This may require only brief irradiation or prolonged illumination, depending on species. Other seeds (such as wild oat) show germination inhibited by light, though this requires intense irradiation over long periods, and is unlikely to involve phytochrome.

In some processes, changes induced by phytochrome involve changes in cell turgor. The circadian (day/night) movement of leaves and petals in some plantsare examples. Such turgor movements are rapid and involve alteredproton pumping and K+ movement through the plasma membrane.

Phytochrome also regulates changes in gene expression. The gene for the small subunit of ribulose bisphosphate oxygenase (Rubisco) is a phytochromeregulated gene involved in the de-etiolation of dark grown seedlings. Red light perception by Pr activates a protein activator of the Rubisco small subunit gene. This activator (called a trans acting factor) binds to the promoter region of the gene (the cis regulator region) and activates it. Phytochrome regulates a number of genes in de-etiolation and this results in the change from non-photosynthetic plastids (etioplasts) to fully functional, photosynthetic chloroplasts.