What are tropisms? Tropisms are plant responses to environmental stimuli including unilateral light and gravity which involve altered growth. They may be positive involving growth towards the stimulus, or negative, away from the stimulus.

Tropisms are plant responses to environmental stimuli including unilateral light and gravity which involve altered growth. They may be positive involving growth towards the stimulus, or negative, away from the stimulus.

Phototropism is the response of the plant to unilateral light. The photoreceptor is likely to be a plasma membrane protein (NPH-1 in arabidopsis) which is phosphorylated in the presence of blue light. The signal is transmitted to the growing region by auxin redistribution between the light and dark sides of the tissue. Auxin stimulates elongation growth resulting in curvature.

Gravitropism is the response of the plant to gravity. Roots are positively gravitropic, while shoots are negatively gravitropic. The stimulus is perceived either by amyloplasts in specialized statocytes in root caps and around vascular tissue or by stretch-activated ion channels and transmitted by auxin redistribution to the growth zone.

Tropisms are responses to environmental stimuli which involve altered growth. Plants are able to respond to a range of environmental stimuli in order to make optimal use of their environment. Table 1 describes a range of tropisms and their functions. Tropisms may be positive (towards the stimulus) or negative (away from the stimulus). All tropisms involve a receptor to sense the stimulus involved (a gravireceptor or photoreceptor, for instance) and a mechanism to transmit that stimulus to the region of the plant in which the altered growth will take place.

Tropisms have attracted a lot of interest since they were first studied by Charles Darwin in the 1870s. Much of the work has concentrated on the responses of the coleoptile of grasses. The coleoptile is a sheath of cells which covers and protects the primary leaf, and shows rapid extension growth.

When a coleoptile is exposed to unilateral light for a short period (1–2 h) it bends towards the light. The action spectrum of phototropism shows sensitivity to blue light. Early experiments showed that it was located at the tip of the coleoptile, as removal or covering the tip prevented the response. A protein photoreceptor has been identified by studying arabidopsis mutants that do not show phototropisms. These mutants lack NPH-1, a plasma membrane receptor protein phosphorylated in response to blue light. The action spectrum of NPH-1 and phototropism correspond almost exactly.

Transmission of the signal

Auxin  has been suggested as the transmitted signal in phototropism. The Cholodny-Went hypothesis states that unilateral light causes auxin redistribution near the apex, with more auxin on the shaded side. The Cholodny- Went hypothesis was criticized for many years, as it was hard to prove auxin redistribution using the techniques that were available. However, transgenic plants expressing promoter-reporter gene constructs  have been used to show that measurable changes in auxin concentrations do occur (Fig. 1). It is therefore likely that auxin is one of the regulators that transmits the signal from perception to the growing tissue.

Auxin causes increased growth on the dark side of the shoot or coleoptile stimulating acidification of the cell wall, resulting in loosening of thewallmatrix. Turgor pressure against the loosened wall results in elongation.

The perception of gravity requires the presence of an object that responds (e.g. by movement) to the gravitational field. Such objects are namedstatoliths. Starch-filled plastids (amyloplasts) are good candidates, as their density means that they move readily within the cytoplasm in a gravitational field. Amyloplasts move against endoplasmic reticulum (ER) at the cortex (outer edge) of specialized cells termed statocytes. Figure 2illustrates how statocytes function. The statocytes are in the root cap (in primary roots) or in a layer (the starch sheath) adjacent to the vascular tissue. Removal of the root cap results in a loss of sensitivity to gravity in primary roots. The scr (scarecrow) mutant of arabidopsis, which has no layer of starch-containing cells around its vascular tissue, does not respond to gravity.

There are some plants (the alga, Chara, for instance) which appear to have no starch grains and still show responses to gravity. An alternative hypothesis is that plant cells have specialized ion channels that are activated by stretching. 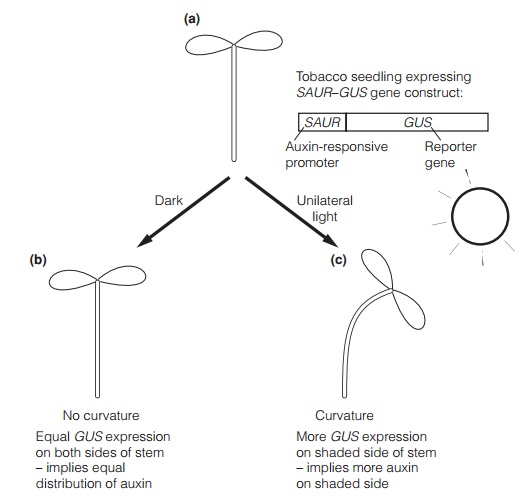 Transmission of the signal and growth response

Auxin is suggested to transmit the signal from the statocytes to the growth zone. In roots, high levels of auxin on the lower side inhibit growth, while lower levels on the upper side permit it; in shoots, higher levels on the lower side stimulate growth while lower levels on the upper side inhibit it. Experiments using plants with promoter-reporter gene constructs (Fig. 1;) have confirmed a redistribution of auxin in seedlings experiencing altering gravitational forces. The mechanism of action of auxin in stimulating growth is described. Calcium has also been suggested to be involved in graviresponse, as transport of calcium from the upper side to the lower side of roots has been shown, and roots will bend towards an agar block containing calcium.