Stress at the Cellular Level 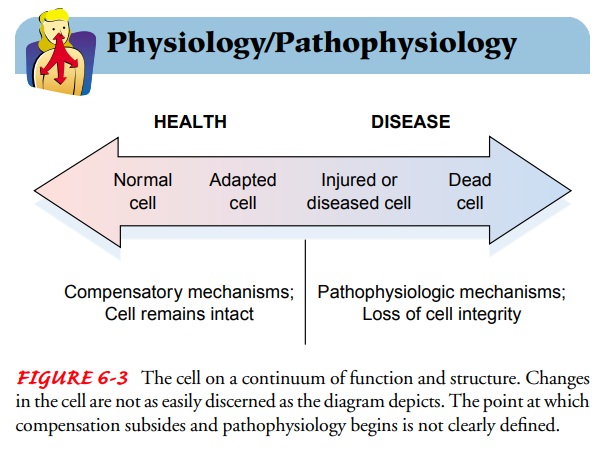 Pathologic processes may occur at all levels of the biologic or-ganism.

Stress at the Cellular Level

Pathologic processes may occur at all levels of the biologic or-ganism. If the cell is considered the smallest unit or subsystem (tissues being aggregates of cells, organs aggregates of tissues, and so forth), the processes of health and disease or adaptation and maladaptation can all occur at the cellular level. Indeed, patho-logic processes are often described by scientists at the subcellular or molecular level.

The cell exists on a continuum of function and structure, ranging from the normal cell, to the adapted cell, to the injured or diseased cell, to the dead cell (Fig. 6-3). Changes from one state to another may occur rapidly and may not be readily detectable, because each state does not have discrete boundaries, and disease represents an extension and distortion of normal processes. 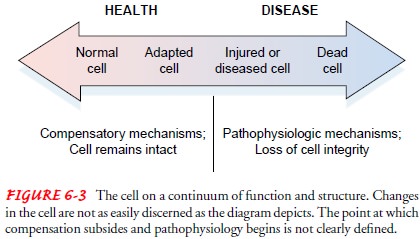 The earliest changes occur at the molecular or subcel-lular level and are not perceptible until steady-state functions or structures are altered. With cell injury, some changes may be re-versible; in other instances, the injuries are lethal. For example, tanning of the skin is an adaptive, morphologic response to expo-sure to the rays of the sun. If the exposure is continued, however, sunburn and injury occur, and some cells may die, as evidenced by desquamation (“peeling”).

Different cells and tissues respond to stimuli with different patterns and rates of response; some cells are more vulnerable to one type of stimulus or stressor than others. The cell involved, its ability to adapt, and its physiologic state are determinants of the response. For example, cardiac muscle cells respond to hy-poxia (inadequate oxygenation) more quickly than smooth mus-cle cells do.

Other determinants of cellular response are the type or nature of the stimulus, its duration, and its severity. For example, neu-rons that control respiration can develop a tolerance to regular, small amounts of a barbiturate, but one large dose may result in respiratory depression and death.