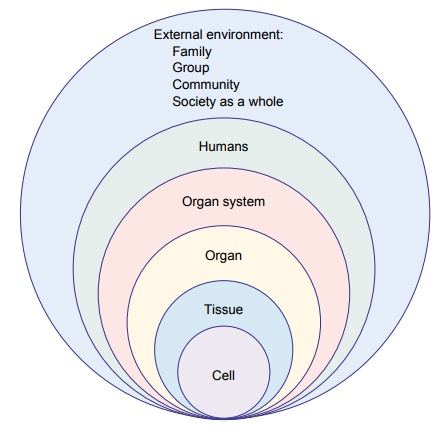 Physiologic mechanisms must be understood in the context of the body as a whole.

Physiologic mechanisms must be understood in the context of the body as a whole. The person, as a living system, has both an in-ternal and an external environment, between which information and matter are continuously exchanged.

Within the internal environment each organ, tissue, and cell is also a system or sub-system of the whole, each with its own internal and external en-vironment, each exchanging information and matter (Fig. 6-1). The goal of the interaction of the body’s subsystems is to pro-duce a dynamic balance or steady state (even in the presence of change), so that all subsystems are in harmony with each other. Four concepts—constancy, homeostasis, stress, and adaptation— enhance the nurse’s understanding of steady state. 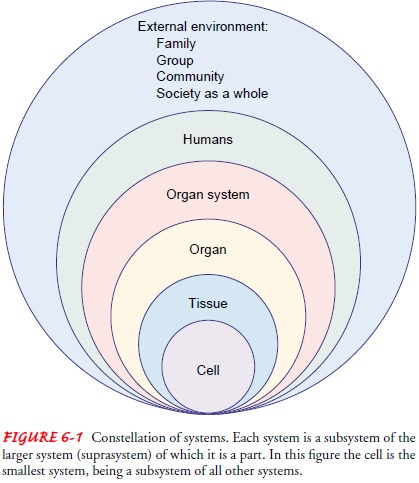 HISTORICAL THEORIES OF THE STEADY STATE

Claude Bernard, a 19th-century French physiologist, developed the biologic principle that for life there must be a constancy or “fixity of the internal milieu” despite changes in the external en-vironment. The internal milieu was the fluid that bathed the cells, and the constancy was the balanced internal state maintained by physiologic and biochemical processes. His principle implied a static process.

Rene Jules Dubos (1965) provided further insight into the dy-namic nature of the internal environment with his theory that two complementary concepts, homeostasis and adaptation, were necessary for balance. Homeostatic processes occurred quickly in response to stress, rapidly making the adjustments necessary to maintain the internal environment. Adaptive processes resulted in structural or functional changes over time. Dubos also em-phasized that acceptable ranges of response to stimuli existed and that these responses varied for different individuals: “Absolute constancy is only a concept of the ideal.” Homeostasis and adap-tation were both necessary for survival in a changing world.

Homeostasis, then, refers to a steady state within the body. When a change or stress occurs that causes a body function to de-viate from its stable range, processes are initiated to restore and maintain the dynamic balance. When these adjustment processes or compensatory mechanisms are not adequate, the steady state is threatened, function becomes disordered, and pathophysio-logic mechanisms occur. The pathophysiologic processes can lead to disease and may be active during disease, which is a threat to the steady state. Disease is an abnormal variation in the structure or function of any part of the body. It disrupts function and therefore limits the person’s freedom of action.

Stress is a state produced by a change in the environment that isperceived as challenging, threatening, or damaging to the per-son’s dynamic balance or equilibrium. The person is, or feels, un-able to meet the demands of the new situation. The change or stimulus that evokes this state is the stressor. The nature of the stressor is variable; an event or change that will produce stress in one person may be neutral for another, and an event that pro-duces stress at one time and place for one person may not do so for the same person at another time and place. A person appraises and copes with changing situations. The desired goal is adapta-tion, or adjustment to the change so that the person is again inequilibrium and has the energy and ability to meet new demands. This is the process of coping with the stress, a compensatory process with physiologic and psychological components.

Adaptation is a constant, ongoing process that requires a change in structure, function, or behavior so that the person is better suited to the environment; it involves an interaction between the person and the environment. The outcome depends on the de-gree of “fit” between the skills and capacities of the person, the type of social support available, and the various challenges or stressors being confronted. As such, adaptation is an individual process: each individual has varying abilities to cope or respond. As new challenges are met, this ability to cope and adapt can change, thereby providing the individual with a wide range of adaptive ability. Adaptation occurs throughout the life span as the individual encounters many developmental and situational chal-lenges, especially related to health and illness. The goal of these encounters is to promote adaptation. In situations of health and illness, this goal is realized by optimal wellness.

Because both stress and adaptation may exist at different lev-els of a system, it is possible to study these reactions at the cellu-lar, tissue, and organ levels. Biologists are concerned mainly with subcellular components or with subsystems of the total body. Be-havioral scientists, including many nurse researchers, study stress and adaptation in individuals, families, groups, and societies; they focus on how a group’s organizational features are modified to meet the requirements of the social and physical environment in which they exist. Adaptation is a continuous process of seeking harmony in an environment. The desired goals of adaptation for any system are survival, growth, and reproduction.