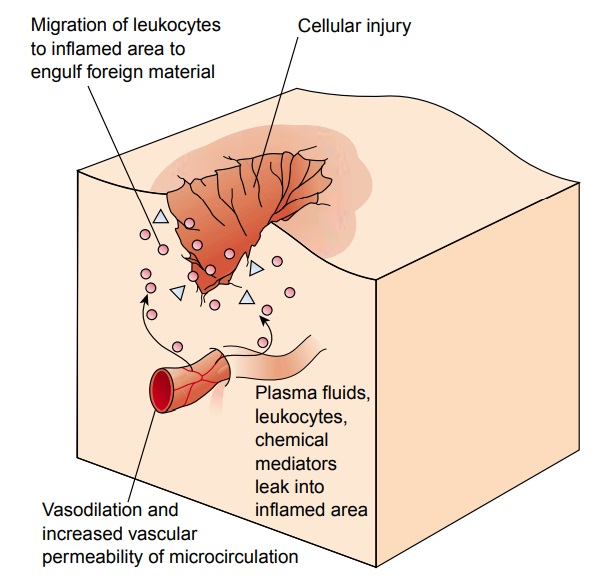 Cells or tissues of the body may be injured or killed by any of the agents (physical, chemical, infectious) described earlier.

Cells or tissues of the body may be injured or killed by any of the agents (physical, chemical, infectious) described earlier. When this happens, an inflammatory response (or inflammation) naturally occurs in the healthy tissues adjacent to the site of injury. Inflam-mation is a defensive reaction intended to neutralize, control, oreliminate the offending agent and to prepare the site for repair. It is a nonspecific response (not dependent on a particular cause) that is meant to serve a protective function. For example, inflamma-tion may be observed at the site of a bee sting, in a sore throat, in a surgical incision, and at a burn site. Inflammation also occurs in cell injury events, such as strokes and myocardial infarctions.

Regardless of the cause, a general sequence of events occurs in the local inflammatory response. This sequence involves changes in the microcirculation, including vasodilation, increased vascu-lar permeability, and leukocytic cellular infiltration (Fig. 6-5). As these changes take place, five cardinal signs of inflammation are produced: redness, heat, swelling, pain, and loss of function. 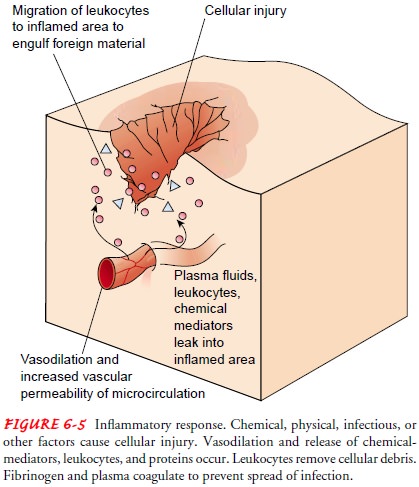 The transient vasoconstriction that occurs immediately after injury is followed by vasodilation and an increased rate of blood flow through the microcirculation. Local heat and redness result. Next, vascular permeability increases, and plasma fluids (includ-ing proteins and solutes) leak into the inflamed tissues, produc-ing swelling. The pain produced is attributed to the pressure of fluids or swelling on nerve endings, and to the irritation of nerve endings by chemical mediators released at the site. Bradykinin is one of the chemical mediators suspected of causing pain. Loss of function is most likely related to the pain and swelling, but the exact mechanism is not completely known.

As blood flow increases and fluid leaks into the surrounding tissues, the formed elements (red blood cells, white blood cells, and platelets) remain in the blood, causing it to become more vis-cous. Leukocytes (white blood cells) collect in the vessels, exit, and migrate to the site of injury to engulf offending organisms and to remove cellular debris in a process called phagocytosis. Fibrinogen in the leaked plasma fluid coagulates, forming fibrin for clot formation, which serves to wall off the injured area and prevent the spread of infection.

Injury initiates the inflammatory response, but chemical sub-stances released at the site induce the vascular changes. Foremost among these chemicals are histamine and the kinins.

Histamine is present in many tissues of the body but is concentrated in the mast cells. It is released when injury occurs and is responsible for the early changes in vasodilation and vascular permeability. Kinins increase vasodilation and vascular permeability; they also attract neutrophils to the area. Prostaglandins, another group of chemical substances, are also suspected of causing increased per-meability.

The inflammatory response is often confined to the site, causing only local signs and symptoms. However, systemic responses can also occur. Fever is the most common sign of a systemic response to injury, and it is most likely caused by endogenous pyrogens (internal substances that cause fever) released from neutrophils and macrophages (specialized forms of leukocytes). These sub-stances reset the hypothalamic thermostat, which controls body temperature, and produce fever. Leukocytosis, an increase in the synthesis and release of neutrophils from bone marrow, may occur to provide the body with greater ability to fight infection. During this process, general, nonspecific symptoms develop, in-cluding malaise, loss of appetite, aching, and weakness.

Inflammation is categorized primarily by its duration and the type of exudate produced. It may be acute, subacute, or chronic. Acute inflammation is characterized by the local vascular and exudative changes described earlier and usually lasts less than 2 weeks. An acute inflammatory response is immediate and serves a protective

function. After the injurious agent is removed, the inflammation subsides and healing takes place with the return of normal or near-normal structure and function.

Chronic inflammation develops if the injurious agent persists and the acute response is perpetuated. Symptoms are present for many months or years. Chronic inflammation may also begin in-sidiously and never have an acute phase. The chronic response does not serve a beneficial and protective function; on the con-trary, it is debilitating and can produce long-lasting effects. As the inflammation becomes chronic, changes occur at the site of in-jury and the nature of the exudate becomes proliferative. A cycle of cellular infiltration, necrosis, and fibrosis begins, with repair and breakdown occurring simultaneously. Considerable scarring may occur, resulting in permanent tissue damage.