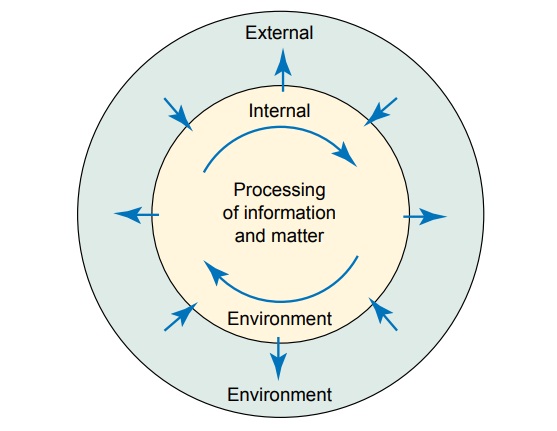 Injury is defined as a disorder in steady-state regulation. Any stressor that alters the ability of the cell or system to maintain op-timal balance of its adjustment processes will lead to injury.

Injury is defined as a disorder in steady-state regulation. Any stressor that alters the ability of the cell or system to maintain op-timal balance of its adjustment processes will lead to injury. Structural and functional damage then occurs, which may be re-versible (permitting recovery) or irreversible (leading to disability or death). Homeostatic adjustments are concerned with the small changes within the body’s systems. With adaptive changes, com-pensation occurs and a steady state is achieved, although it may be at new levels. With injury, steady-state regulation is lost, and changes in functioning ensue.

Causes of disorder and injury in the system (cell, tissue, organ, body) may arise from the external or internal environment (Fig. 6-4) and include hypoxia, nutritional imbalance, physical agents, chemical agents, infectious agents, immune mecha-nisms, genetic defects, and psychogenic factors. The most com-mon causes are hypoxia (oxygen deficiency), chemical injury, and infectious agents. In addition, the presence of one injury makes the system more susceptible to another injury. For example, in-adequate oxygenation and nutritional deficiencies make the sys-tem vulnerable to infection. These agents act at the cellular level by damaging or destroying 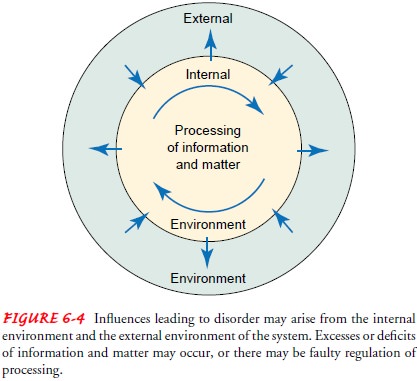 ·      The integrity of the cell membrane, necessary for ionic bal-ance

·      The ability of the cell to transform energy (aerobic respira-tion, production of adenosine triphosphate)

Inadequate cellular oxygenation (hypoxia) interferes with the cell’s ability to transform energy. Hypoxia may be caused by:

The usual cause is ischemia, or deficient blood supply. Ischemia is commonly seen in myocardial cell injury in which arterial blood flow is decreased because of atherosclerotic narrowing of blood vessels. Ischemia also results from intravascular clots (thrombi or emboli) that may form and interfere with blood sup-ply. Thrombi and emboli are common causes of cerebrovascular accidents (strokes). The length of time different tissues can sur-vive without oxygen varies. For example, brain cells may succumb in 3 to 6 minutes, depending on the situation. If the condition leading to hypoxia is slow and progressive, collateral circulation may develop, whereby blood is supplied by other blood vessels in the area. However, this mechanism is not highly reliable.

Nutritional imbalance refers to a relative or absolute deficiency or excess of one or more essential nutrients. This may be mani-fested as undernutrition (inadequate consumption of food or calories) or overnutrition (caloric excess). Caloric excess to the point of obesity overloads cells in the body with lipids. By re-quiring more energy to maintain the extra tissue, obesity places a strain on the body and has been associated with the development of disease, especially pulmonary and cardiovascular disease.

Specific deficiencies arise when an essential nutrient is defi-cient or when there is an imbalance of nutrients. Protein defi-ciencies and avitaminosis (deficiency of vitamins) are typical examples. An energy deficit leading to cell injury can occur if there is insufficient glucose, or insufficient oxygen to transform the glucose into energy. A lack of insulin, or the inability to use insulin, may also prevent glucose from entering the cell from the blood. This occurs in diabetes mellitus, a metabolic disorder that can lead to nutritional deficiency.

Physical agents, including temperature extremes, radiation, elec-trical shock, and mechanical trauma, can cause injury to the cells or to the entire body. The duration of exposure and the intensity of the stressor determine the severity of damage.

When a person’s temperature is elevated, hypermetabolism oc-curs and the respiratory rate, heart rate, and basal metabolic rate all increase. With fever induced by infections, the hypothalamic thermostat may be reset at a higher temperature, then return to normal when the fever abates. The increase in body temperature is achieved through physiologic mechanisms. Body temperatures greater than 41°C (106°F) suggest hyperthermia, because the physiologic function of the thermoregulatory center breaks down and the temperature soars. This physiologic condition occurs in people with heat stroke. Eventually, the high temperature causes coagulation of cell proteins, and the cells die. The body must be cooled rapidly to prevent brain damage.

The local response to thermal or burn injury is similar. There is an increase in metabolic activity, and, as heat increases, protein is coagulated, enzyme systems are destroyed, and, in the extreme, charring or carbonization occurs. Burns of the epithelium are classified as partial-thickness burns if epithelializing elements re-main to support healing. Full-thickness burns lack such elements and must be grafted for healing. The amount of body surface in-volved determines the prognosis for the patient. If the injury is severe, the entire body system becomes involved, and hyper-metabolism develops as a pathophysiologic response.

Extremes of low temperature, or cold, cause vasoconstriction. Blood flow becomes sluggish and clots form, leading to ischemic damage in the involved tissues. With still lower temperatures, ice crystals may form, and the cells may burst.

Radiation is used for diagnosis and treatment of diseases. Ioniz-ing forms of radiation may cause injury by their destructive ac-tion. Radiation decreases the protective inflammatory response of the cell, creating a favorable environment for opportunistic in-fections. Electrical shock produces burns as a result of the heat generated when electrical current travels through the body. It may also abnormally stimulate nerves, leading, for example, to fibrillation of the heart.

Mechanical trauma can result in wounds that disrupt the cells and tissues of the body. The severity of the wound, the amount of blood loss, and the extent of nerve damage are significant factors in the outcome.

Chemical injuries are caused by poisons, such as lye, which has a corrosive action on epithelial tissue, or by heavy metals, such as mercury, arsenic, and lead, each with its own specific destructive action. Many other chemicals are toxic in specific amounts, in certain people, and in distinctive tissues. Excessive secretion of hydrochloric acid can damage the stomach lining; large amounts of glucose can cause osmotic shifts, affecting the fluid and elec-trolyte balance; and too much insulin can cause subnormal levels of glucose in the blood (hypoglycemia) and can lead to coma.

Drugs, including prescribed medications, can also cause chem-ical poisoning. Some individuals are less tolerant of medications than others and manifest toxic reactions at the usual or custom-ary dosages. Aging tends to decrease tolerance to medications. Polypharmacy (taking many medications at one time) also occurs frequently in the aging population and is a problem because of the unpredictable effects of the resulting medication interactions.

Alcohol (ethanol) is also a chemical irritant. In the body, al-cohol is broken down into acetaldehyde, which has a direct toxic effect on liver cells that leads to a variety of liver abnormalities, including cirrhosis in susceptible individuals. Disordered liver cell function leads to complications in other organs of the body.

Biologic agents known to cause disease in humans are viruses, bacteria, rickettsiae, mycoplasmas, fungi, protozoa, and nema-todes. The severity of the infectious disease depends on the num-ber of microorganisms entering the body, their virulence, and the host’s defenses (eg, health, age, immune defenses).

Some bacteria, such as those that cause tetanus and diphtheria, produce exotoxins that circulate and create cell damage. Others, such as the gram-negative bacteria, produce endotoxins when they are killed. The tubercle bacillus induces an immune reaction.

Viruses, the smallest living organisms, survive as parasites of the living cells they invade. Viruses infect specific cells. Through a complex mechanism, they replicate within the cells, then invade other cells and continue to replicate. An immune response is mounted by the body to eliminate the viruses, and the cells har-boring the viruses can be injured in the process. Typically, an in-flammatory response and immune reaction are the physiologic responses of the body to the presence of infection.

The immune system is an exceedingly complex system; its pur-pose is to defend the body from invasion by any foreign object or foreign cell type, such as cancerous cells. This is a steady-state mechanism, but like other adjustment processes it can become disordered, and cell injury will occur. The immune response de-tects foreign bodies by distinguishing non-self substances from self substances and destroying the non-self entities. The entrance of an antigen (foreign substance) into the body evokes the production of antibodies that attack and destroy the antigen (antigen–antibody reaction).

The immune system can be hypoactive or hyperactive. When it is hypoactive, immunodeficiency diseases occur; when it is hy-peractive, hypersensitivity disorders arise. A disorder of the im-mune system itself can result in damage to the body’s own tissues. Such disorders are labeled autoimmune diseases (see Unit 11).

Genetic defects as causes of disease and their effects on genetic structure are of intense research interest. Many of these defects produce mutations that have no recognizable effect, such as lack of a single enzyme; others contribute to more obvious congen-ital abnormalities, such as Down syndrome. As a result of the Human Genome Project, patients can be genetically assessed for conditions such as sickle cell disease, cystic fibrosis, hemophilia A and B, breast cancer, obesity, cardiovascular disease, phenylke-tonuria, and Alzheimer’s disease. The availability of genetic information and technology enables health care providers to per-form screening, testing, and counseling for patients with genetic concerns. Knowledge obtained from the Human Genome Proj-ect has also created opportunities for assessing a person’s genetic profile and preventing or treating disease. Diagnostic genetics and gene therapy have the potential to identify and modify a gene before it begins to express traits that would lead to disease or disability.