The physiologic response to a stressor, whether it is a physical stressor or a psychological stressor, is a protective and adaptive mechanism to maintain the homeostatic balance of the body.

The physiologic response to a stressor, whether it is a physical stressor or a psychological stressor, is a protective and adaptive mechanism to maintain the homeostatic balance of the body. The stress response is a “cascade of neural and hormonal events that have short- and long-lasting consequences for both brain and body . . .; a stressor is an event that challenges homeostasis, with a disease outcome being looked upon as a failure of the normal process of adaptation to the stress”.

Hans Selye developed a theory of adaptation that profoundly influenced the scientific study of stress. In 1936, Selye, experi-menting with animals, first described a syndrome consisting of en-largement of the adrenal cortex; shrinkage of the thymus, spleen, lymph nodes, and other lymphatic structures; and the appearance of deep, bleeding ulcers in the stomach and duodenum. He iden-tified this as a nonspecific response to diverse, noxious stimuli. From this beginning, he developed a theory of adaptation to bio-logic stress that he named the general adaptation syndrome.

PHASES OF THE GENERAL ADAPTATION SYNDROME

The general adaptation syndrome has three phases: alarm, resis-tance, and exhaustion. During the alarm phase, the sympathetic “fight-or-flight” response is activated with release of catechol-amines and the onset of the adrenocorticotropic hormone (ACTH)–adrenal cortical response. The alarm reaction is defen-sive and anti-inflammatory but self-limited. Because living in a continuous state of alarm would result in death, the person moves into the second stage, resistance. During this stage, adaptation to the noxious stressor occurs, and cortisol activity is still increased. If exposure to the stressor is prolonged, exhaustion sets in and en-docrine activity increases. This produces deleterious effects on the body systems (especially the circulatory, digestive, and immune systems) that can lead to death. Stages one and two of this syn-drome are repeated, in different degrees, throughout life as the person encounters stressors.

Selye compared the general adaptation syndrome with the life process. During childhood, there are too few encounters with stress to promote the development of adaptive functioning, and the child is vulnerable. During adulthood, the person encounters a number of life’s stressful events and develops a resistance or adap-tation. During the later years, the accumulation of life’s stressors and the wear and tear on the organism again deplete the person’s ability to adapt, resistance falls, and eventually death occurs.

Selye emphasized that stress is the nonspecific response com-mon to all stressors, regardless of whether they are physiologic, psychological, or social. The many conditioning factors in each person’s environment account for why different demands are in-terpreted by different people as stressors. Conditioning factors also account for differences in the tolerance of different people for stress: some people may develop diseases of adaptation, such as hypertension and migraine headaches, while others are unaffected.

Interpretation of Stressful Stimuli by the Brain

Physiologic responses to stress are mediated by the brain through a complex network of chemical and electrical messages. The neural and hormonal actions that maintain homeostatic balance are integrated by the hypothalamus, which is located in the cen-ter of the brain, surrounded by the limbic system and the cerebral hemispheres. The hypothalamus integrates autonomic nervous system mechanisms that maintain the chemical constancy of the internal environment of the body. Together with the limbic sys-tem, it also regulates emotions and many visceral behaviors nec-essary for survival (eg, eating, drinking, temperature control, reproduction, defense, aggression). The hypothalamus is made up of a number of nuclei; the limbic system contains the amyg-dala, hippocampus, and septal nuclei, along with other structures.

Literature supports the concept that each of these structures responds differently to stimuli, and each has its own characteris-tic response (Watkins, 1997). The cerebral hemispheres are con-cerned with cognitive functions: thought processes, learning, and memory. The limbic system has connections with both the cere-bral hemispheres and the brain stem. In addition, the reticular ac-tivating system, which is a network of cells that forms a two-way communication system, extends from the brain stem into the midbrain and limbic system. This network controls the alert or waking state of the body.

In the stress response, afferent impulses are carried from sen-sory organs (eye, ear, nose, skin) and internal sensors (barorecep-tors, chemoreceptors) to nerve centers in the brain. The response to the perception of stress is integrated in the hypothalamus,which coordinates the adjustments necessary to return to homeo-static balance. The degree and duration of the response varies; major stress evokes both sympathetic and pituitary adrenal responses.

The sympathetic nervous system response is rapid and short-lived. Norepinephrine is released at nerve endings that are in di-rect contact with their respective end organs to cause an increase in function of the vital organs and a state of general body arousal. The heart rate is increased and peripheral vasoconstriction oc-curs, raising the blood pressure. Blood is also shunted away from abdominal organs. The purpose of these activities is to provide better perfusion of vital organs (brain, heart, skeletal muscles)Blood glucose is increased, supplying more readily available en-ergy. The pupils are dilated, and mental activity is increased; a greater sense of awareness exists. Constriction of the blood ves-sels of the skin limits bleeding in the event of trauma. The per-son is likely to experience cold feet, clammy skin and hands, chills, palpitations, and a knot in the stomach. Typically, the per-son appears tense, with the muscles of the neck, upper back, and shoulders tightened; respirations may be rapid and shallow, with the diaphragm tense.

In addition to its direct effect on major end organs, the sympa-thetic nervous system also stimulates the medulla of the adrenal gland to release the hormones epinephrine and norepinephrine into the bloodstream. The action of these hormones is similar to that of the sympathetic nervous system and have the effect of sus-taining and prolonging its actions. Epinephrine and norepineph-rine are catecholamines that stimulate the nervous system and produce metabolic effects that increase the blood glucose level and increase the metabolic rate. The effect of the sympathetic and adrenal-medullary responses is summarized in Table 6-1. This effect is called the “fight-or-flight” reaction. 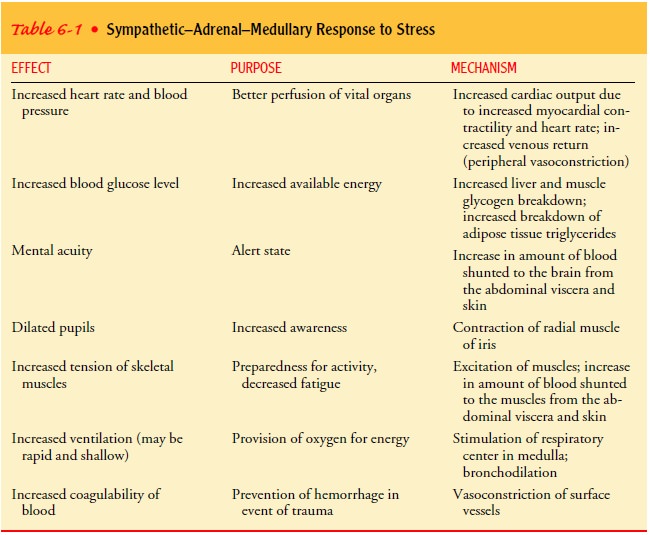 The longest-acting phase of the physiologic response, which is more likely to occur in persistent stress, involves the hypothalamic-pituitary pathway. The hypothalamus secretes corticotropin-releasing factor, which stimulates the anterior pituitary to produce ACTH. ACTH in turn stimulates the adrenal cortex to produce glucocorticoids, primarily cortisol. Cortisol stimulates proteincatabolism, releasing amino acids; stimulates liver uptake of amino acids and their conversion to glucose (gluconeogenesis); and in-hibits glucose uptake (anti-insulin action) by many body cells but not those of the brain and heart. These cortisol-induced meta-bolic effects provide the body with a ready source of energy during a stressful situation. This effect has some important im-plications. For example, a person with diabetes who is under stress, such as that caused by an infection, needs more insulin than usual. Any patient who is under stress (caused, for example, by illness, surgery, trauma or prolonged psychological stress) catab-olizes body protein and needs supplements. Children subjected to severe stress have retarded growth.

The actions of the catecholamines (epinephrine and norepi-nephrine) and cortisol are the most important in the general response to stress. Other hormones released are antidiuretic hor-mone (ADH) from the posterior pituitary and aldosterone fromthe adrenal cortex. ADH and aldosterone promote sodium and water retention, which is an adaptive mechanism in the event of hemorrhage or loss of fluids through excessive perspiration. ADH has also been shown to influence learning and may thus facilitate coping in new and threatening situations. Secretion of growth hormone and glucagon stimulates the uptake of amino acids by cells, helping to mobilize energy resources.

Endorphins, which are endogenous opiates, increase during stress and enhance the threshold for tolerance of painful stimuli. They may also affect mood and have been implicated in the so-called “high” that long-distance runners experience. The secretion of other hormones is also affected, but their adaptive function is less clear.

Research findings show that the immune system is connected to the neuroendocrine and autonomic systems. Lymphoid tissue is richly supplied by autonomic nerves capable of releasing a num-ber of different neuropeptides that can have a direct effect on leukocyte regulation and the inflammatory response. Neuro-endocrine hormones released by the central nervous system and endocrine tissues can inhibit or stimulate leukocyte function. The wide variety of stressors people experience may result in different alterations in autonomic activity and subtle variations in neuro-hormone and neuropeptide synthesis. All of these possible auto-nomic and neuroendocrine responses can interact to initiate, weaken, enhance, or terminate an immune response (Watkins, 1997).

The study of the relationships among the neuroendocrine sys-tem, the central and autonomic nervous systems, and the im-mune system and the effects of these relationships on overall health outcomes is called psychoneuroimmunology. Because one’s perception of events and coping styles determine whether, and to what extent, an event activates the stress response system, and be-cause the stress response affects immune activity, one’s percep-tions, ideas, and thoughts can have profound neurochemical and immunologic consequences. Multiple studies have demonstrated alteration of immune function in people who are under stress, as evidenced by a decrease in the number of leukocytes, impaired immune response to immunizations, and diminished cytotoxicity of natural killer cells (Andersen et al., 1998; Constantino, Sec-ula, Rabin, & Stone, 2000; Glaser & Kiecolt-Glaser, 1997; Pike et al., 1997; Robinson, Matthews, & Witek-Janusek, 2000). Other studies have identified certain personality traits, such as op-timism and active coping, as having positive effects on health or specific immune measures (Chalfont & Bennett, 1999; Goodkin et al., 1996; Kennedy, 2000; Sergerstrom, Fahey, Kemeny, & Taylor, 1998). As research continues, this new field of study will continue to uncover to what extent and by what mechanisms people can consciously influence their immunity.