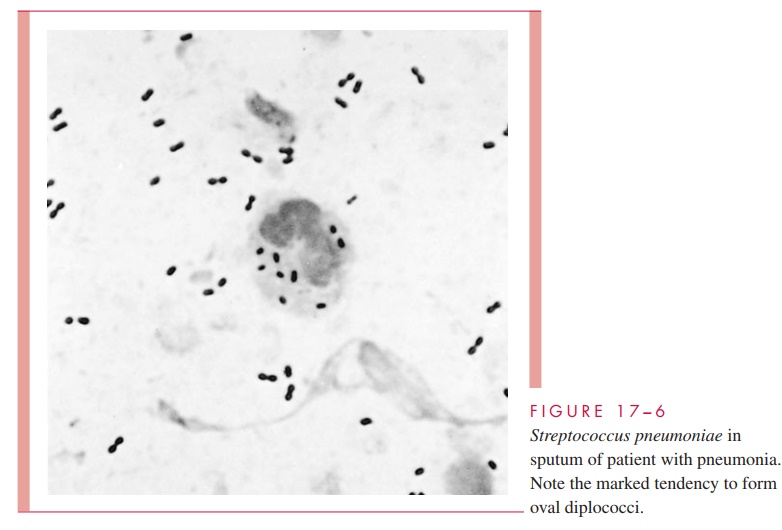 All virulent strains have surface capsules, composed of high-molecular-weight polysaccharide polymers that are complex mixtures of monosaccharides, oligosaccharides, and sometimes other components. The exact makeup of the polymer is unique and distinctly antigenic for each of more than 90 serotypes. A number of pneumococcal surface proteins have been identified but their function is not known.

Pneumococcal cell wall structure is similar to other streptococci. Teichoic acid, LPA, and phosphocholine are rooted in the peptidoglycan extending outward into the capsule where they provide binding domains for a variety of surface proteins. At least one of these, a choline binding protein, is able to bind to both pneumococcal cell wall cholines and carbohydrates present on the surface of epithelial cells.

On blood agar, pneumococci produce round, glistening 0.5- to 2.0-mm colonies sur-rounded by a zone of α-hemolysis. Both colonies and broth cultures have a tendency to undergo autolysis due to their susceptibility to peroxides produced during growth and the action of autolysins, a family of pneumococcal enzymes that degrade peptidoglycan. Ac- celerating the autolytic process with bile salts is the basis of the bile solubility test that separates pneumococci from other β-hemolytic streptococci.

All pneumococci produce pneumolysin, which is a member of the family of transmem-brane pore-forming toxins that includes staphylococcal toxin, S. pyogenesstreptolysin O, and others. The pneumococcus does not secrete pneumolysin but it is released on lysis of the organisms augmented by autolysins. Pneumolysin has a number of other effects, including its ability to stimulate cytokines and disrupt the cilia of cultured human respira-tory epithelial cells. Pneumococci also produce aneuraminidase, which cleaves sialic acid present in host mucin, glycolipids and glycoproteins.