Streptococci stain readily with common dyes, demonstrating coccal cells that are generally smaller and more ovoid in shape than staphylococci.

Streptococci stain readily with common dyes, demonstrating coccal cells that are generally smaller and more ovoid in shape than staphylococci. They are usually arranged in chains with oval cells touching end to end, because they divide in one plane and tend to remain attached. Length may vary from a single pair to continuous chains of over 30 cells, depending on the species and growth conditions. Medically important strepto-cocci are not acid fast, do not form spores, and are nonmotile. Some members form capsules composed of polysaccharide complexes or hyaluronic acid.

Streptococci grow best in enriched media under aerobic or anaerobic conditions (faculta- tive). Growth of many strains is enhanced by the presence of carbon dioxide. Blood agar is preferred because it satisfies the growth requirements and also serves as an indicator for patterns of hemolysis. The colonies are small, ranging from pinpoint size to 2 mm in di- ameter, and they may be surrounded by a zone where the erythrocytes suspended in the agar have been hemolyzed. When this zone is clear, this state is called   β-hemolysis.

When the result is hazy (incomplete hemolysis), with a green discoloration of the agar, it is called α-hemolysis. Streptococci are metabolically active, attacking a variety of carbo-hydrates, proteins, and amino acids. Glucose fermentation yields mostly lactic acid. In contrast to staphylococci, streptococci are catalase negative.

At the turn of the 20th century, a classification based on hemolysis and biochemical tests was sufficient to associate some streptococcal species with infections in humans and animals. Rebecca Lancefield, who demonstrated carbohydrate antigens in cell-wall extracts of the β-hemolytic streptococci, put this taxonomy on a sounder basis. Her studies formed a classification by serogroups (eg, A, B, C), each of which is generally correlated with an established species. Later it was discovered that some nonhemolytic streptococci had the same cell wall antigens. Over the years it has become clear that possession of one of the Lancefield antigens defines a particularly virulent segment of the streptococcal genus regardless of hemolytic patterns. These are called the pyogenicstreptococci, and in medical circles they are now better known by their Lancefieldletter than the older species name. Pediatricians instantly recognize GBS as an acronym for group B streptococcus but may be confused by use of the proper name, Streptococ-cus agalactiae (Table 17 – 1). 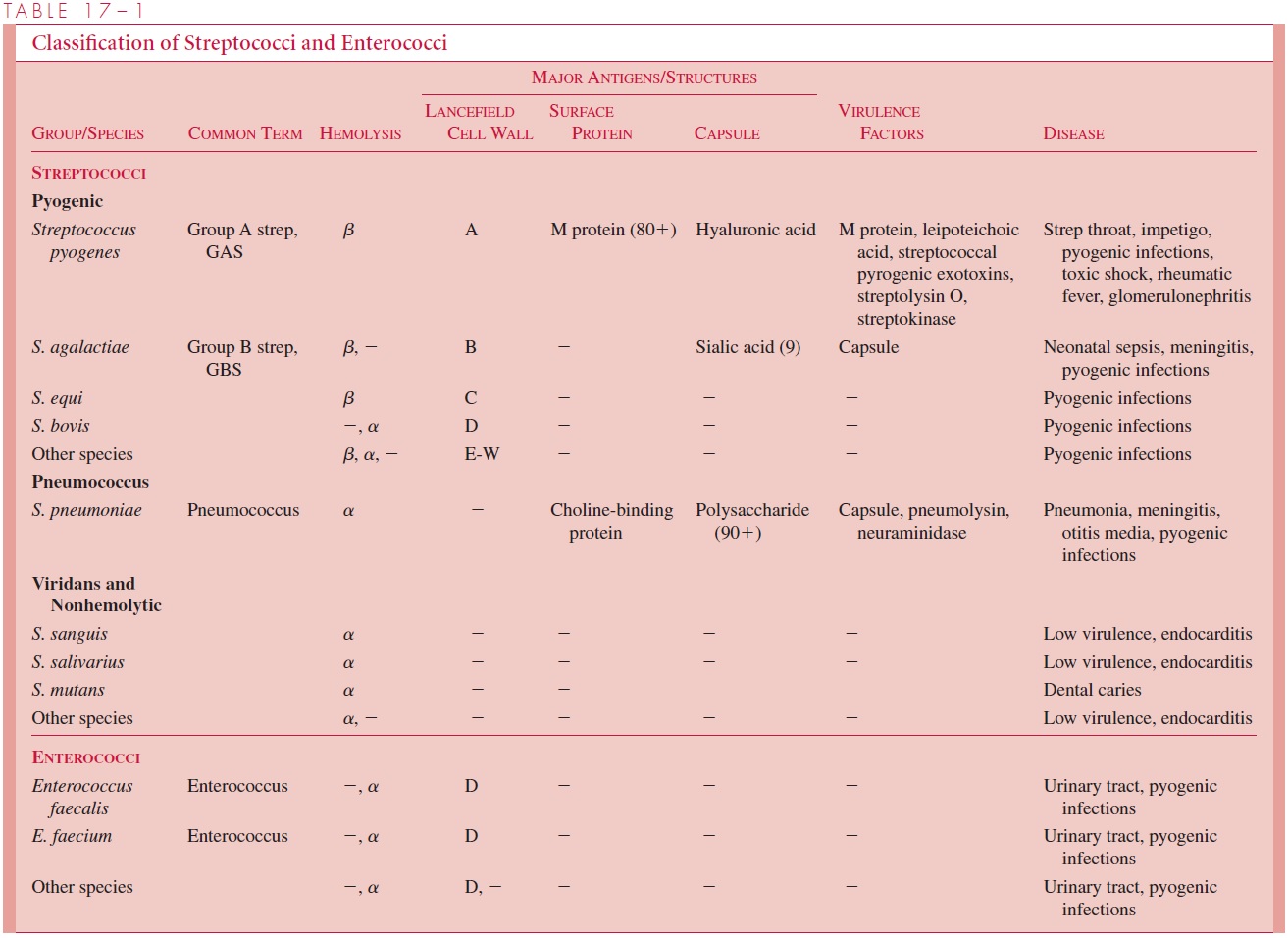 For practical purposes, the type of hemolysis and certain biochemical reactions re-main valuable for the initial recognition and presumptive classification of streptococci, and as an indication of what subsequent taxonomic tests to perform. Thus, β-hemolysis indicates that the strain has one of the Lancefield group antigens, but some Lancefield positive strains or groups may be β-hemolytic or even nonhemolytic. The streptococci will be considered as follows: (1) pyogenic streptococci (Lancefield groups); (2) pneumo-cocci; (3) viridans and other streptococci (see Table 17 – 1).

Of the many Lancefield groups, the ones most frequently isolated from humans are A, B, C, F, and G. Of these, groups A (S. pyogenes) and B (S. agalactiae) are the most frequent causes of serious disease. The group D carbohydrate is found in the genus Enterococcus, which used to be classified among the streptococci.

This category contains a single species, S. pneumoniae, commonly called the pneumococ-cus. Its distinctive feature is the presence of a capsule composed of polysaccharide poly- mers that vary in antigenic specificity. More than 90 capsular immunotypes have been defined. Although the pneumococcal cell wall shares some common antigens with otherstreptococci, it does not possess any of the Lancefield group antigens. S. pneumoniae is β-hemolytic.

Viridans and Other Streptococci