The typical GBS case is a newborn in the first few days of life who is not doing well. Fever, lethargy, poor feeding, and respiratory distress are the most common features.

The typical GBS case is a newborn in the first few days of life who is not doing well. Fever, lethargy, poor feeding, and respiratory distress are the most common features. Localizing findings are usually lacking, and the diagnosis is revealed only by isolation of GBS from blood or cerebrospinal fluid. The mortality rate is high even when appropriate antibiotics are used.

GBS are the leading cause of sepsis and meningitis in the first few days of life. The or-ganism is resident in the gastrointestinal tract, with secondary spread to other sites, the most important of which is the vagina. GBS can be found in the vaginal flora of 10 to 30% of women, and during pregnancy and delivery, these organisms may again access to the amniotic fluid or colonize the newborn as it passes through the birth canal. Judging from US surveillance data (1.8 cases/1000 live births), GBS produce disease in approxi-mately 2% of these encounters. The risk is much higher when factors are present that decrease the infant’s innate resistance (prematurity) or increase the chances of transmis-sion (ruptured amniotic membranes). Some infants are healthy at birth but develop sepsis 1 to 3 months later. It is not known whether the organism in these “late-onset” cases was acquired from the mother, in the nursery, or in the community after leaving the hospital.

GBS disease requires the proper combination of organism and host factors. The GBS capsule is the major organism factor. The sialic acid moiety of the capsule has been shown to bind serum factor H, which in turn accelerates degradation of C3b before it can be effectively deposited on the surface of the organism. This makes alternate pathway–mediated mechanisms of opsonophagocytosis relatively ineffective (see Fig 17–4). Thus, complement- mediated phagocyte recognition requires specific antibody and the classical pathway. Newborns will have this antibody only if they receive it from their mother as transplacental IgG. Those who lack the protective “cover” of antibody specific to the type of GBS they encounter must rely on alternate pathway mechanisms, a situation in which the GBS has an advantage over less virulent organisms. GBS have also been shown to produce a peptidase that inactivates C5a, the major chemoattractant of PMNs. This may correlate with the observation that serious neonatal infections often show a paucity of infiltrating PMNs. 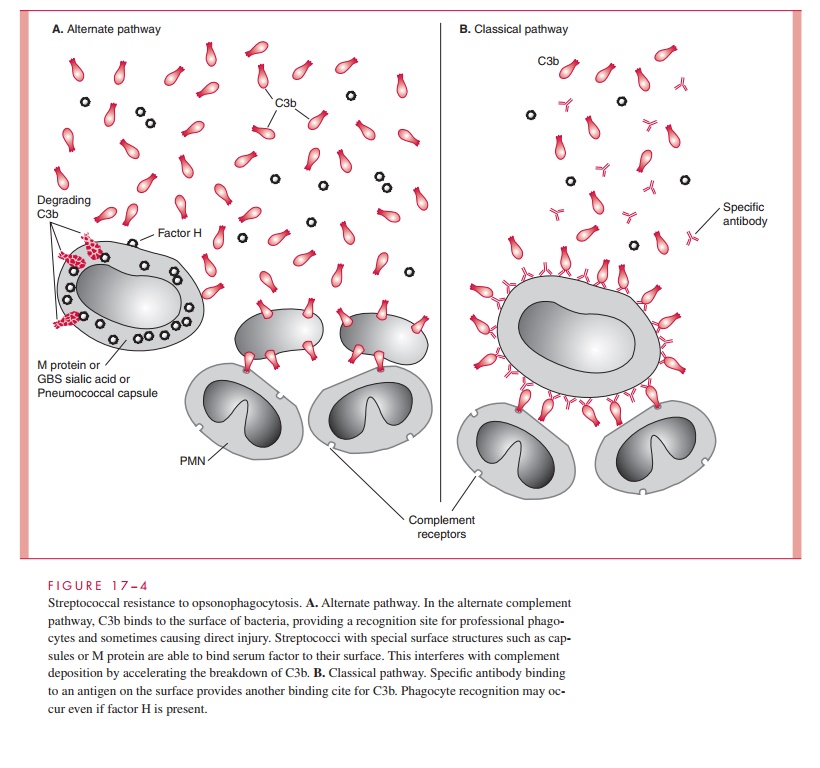 Antibody is protective against GBS disease, but as with group A streptococcal M pro-tein, the antibody must be specific to the infecting type of GBS. Fortunately, there are only nine types and type III produces the majority of cases in the first week of life. Antibody is acquired by GBS infection, and specific IgG may be transmitted transpla-centally to the fetus, providing protection in the perinatal period. In the presence of type-specific antibody, classical pathway C3b deposition, phagocyte recognition, and killing proceed normally.