Group A streptococci typically appear in purulent lesions or broth cultures as spherical or ovoid cells in chains of short to medium length (4 to 10 cells).

Group A streptococci typically appear in purulent lesions or broth cultures as spherical or ovoid cells in chains of short to medium length (4 to 10 cells). On blood agar plates, colonies are usually compact, small, and surrounded by a 2- to 3-mm zone of hemoly-sis that is easily seen and sharply demarcated. β-hemolysis is caused by either of two hemolysins, streptolysin S and the oxygen-labile streptolysin O, both of which are pro-duced by most group A strains. Strains that lack streptolysin S are β-hemolytic only under anaerobic conditions, because the remaining streptolysin O is not active in the pres-ence of oxygen. This feature is of practical importance, because such strains would be missed if cultures were incubated only aerobically.

The structure of group A streptococci is illustrated in Figure 17 – 1. The cell wall is built on a peptidoglycan matrix that provides rigidity, as in other Gram-positive bacteria. Within this matrix lies the group carbohydrate antigen, which by definition is present in all group A streptococci. 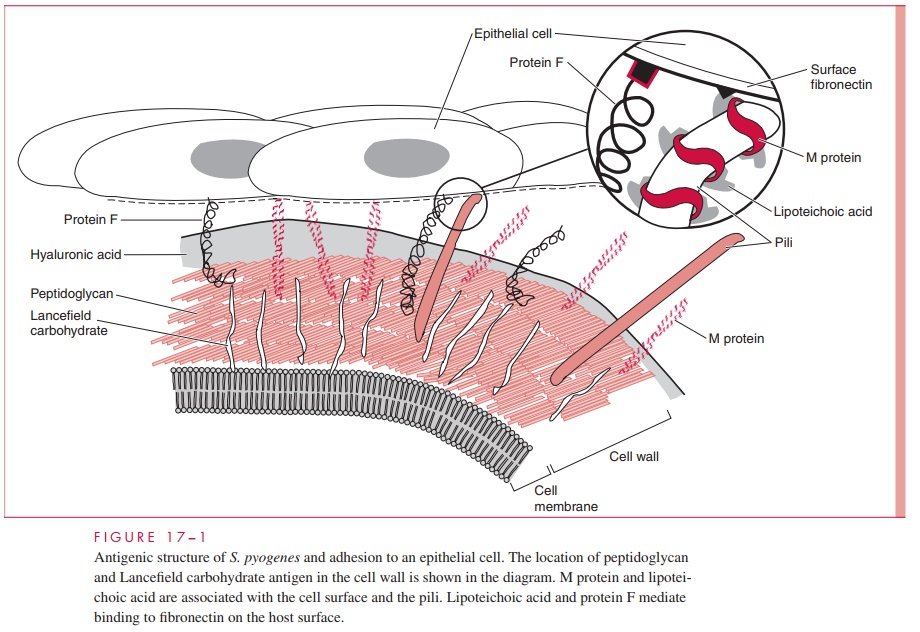 A number of other molecules such as M protein and lipoteichoic acid (LTA) are attached to the cell wall but extend beyond often in association with the hair-like pili. Group A streptococci are divided into more than 80 serotypes based on antigenic differences in the M protein. Some strains have an overlying nonantigenic hyaluronic acid capsule.

The M protein itself is a fibrillar coiled-coil molecule (Fig 17 – 2) with structural homology to myosin. Its carboxy terminus is rooted in the peptidoglycan of the cell wall, and the amino-terminal regions extend out from the surface. The specificity of the more than 80 serotypes of M protein is determined by variations in the amino sequence of the amino-terminal portion of the molecule. Because of its location, this part of the M protein is also the most available to immune surveillance. The middle part of the molecule is less variable, and some carboxy terminal regions are conserved across many M types. There is increasing evidence that some the many known biologic functions of M protein can be assigned to spe-cific domains of the molecule. This includes both antigenicity and the capacity to bind other molecules such as fibrinogen, serum factor H, and immunoglobulins. 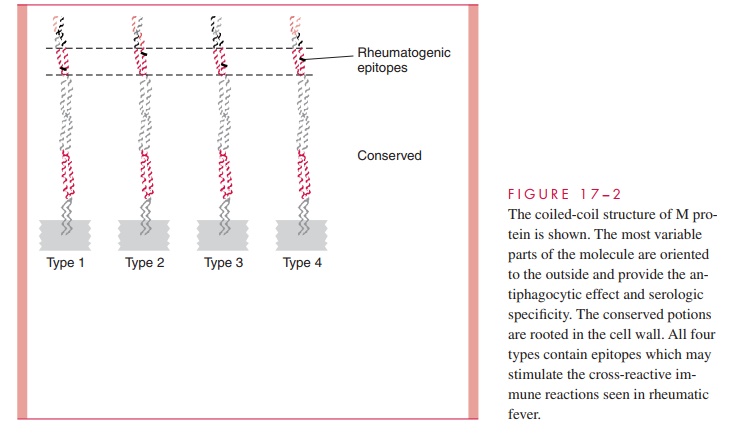 A number of surface proteins have been described on the basis of their similarity with M protein or some unique binding capacity. Of these, a fibronectin binding protein Fand LTA are both exposed on the streptococcal surface (see Fig 17 – 1) and may have a role in patho-genesis. An IgG binding protein has the capacity to bind the Fc portion of antibodies in much the same way as staphylococcal protein A. In principle, this could interfere with op-sonization by creating a covering of antibody molecules on the streptococcal surface that are facing the “wrong way.” Group A streptococci may have a hyaluronic acid capsule, which is a polymer containing repeating units of glucuronic acid and N-acetylglucosamine.

Streptolysin O is a general cytotoxin, lysing leukocytes, tissue cells, and platelets. The toxin inserts directly into the cell membrane of host cells, forming transmembrane pores in a manner similar to complement and staphylococcal α-Toxin . Streptolysin O is antigenic and the quantitation of antibodies against it is the basis of a standard sero-logic test called antistreptolysin O (ASO).

The manifestations of classical scarlet fever have long been associated with the action of an erythrogenic toxin. This toxin is now included in a family of nine proteins called streptococcal pyrogenic exotoxins (SPEs), one of which is produced by approximately10% of group A streptococci. The SPEs are identified by letters (eg, A, B, C) and are sim-ilar in structure and biological activity to the pyrogenic exotoxins produced by Staphylo-coccus aureus. They have multiple effects including fever, rash (scarlet fever), T-cellproliferation, B-lymphocyte suppression, and heightened sensitivity to endotoxin. At least some of these actions are due to cytokine release through the superantigen mechanism . SPE-B also has enzymatic activity cleaving elements of the extracellular matrix, including fibronectin and vitronectin.

Most strains of group A streptococci produce a number of other extracellular products including streptokinase, hyaluronidase, nucleases, and a C5a peptidase. The C5a peptidase is an enzyme that degrades complement component C5a, the main factor that attracts phagocytes to sites of complement deposition. The enzymatic actions of the others likely play some role in tissue injury or spread, but no specific roles have been defined. Some are antigenic and have been the basis of serologic tests. Streptokinase causes lysis of fibrin clots through conversion of plasminogen in normal plasma to the protease plasmin.