Under this method, a fixed percentage on the original cost of the asset is charged every year by way of depreciation.

This method is suitable for those assets the useful life of which can be estimated accurately and which do not require much expense on repairs and renewals.

·           In the year of purchase, if the period of use is less than a year, the amount of depreciation will be charged proportionately for the period for which the asset has been used in the business.

When it is plotted on a graph for 5 years, it appears as follows: 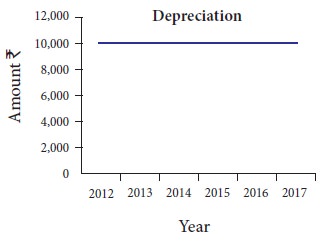 Following are the merits of straight line method of depreciation:

(a)  Simple and easy to understand

Computation of depreciation under this method is very simple and is easy to understand.

(b)  Equality of depreciation burden

(c)  Assets can be completely written off

Under this method, the book value of an asset can be reduced to zero if there is no scrap value or to the scrap value at the end of its useful life. Thus the asset account can be completely written off.

(d)  Suitable for the assets having fixed working life

This method is appropriate for the fixed assets having certain fixed period of working life. In such cases, the estimation of useful life is easy and in turn it helps in easy determination of rate of depreciation.

Following are the limitations of straight line method of depreciation:

(a)  Ignores the actual use of the asset

(b)  Ignores the interest factor

This method does not take into account the loss of interest on the amount invested in the asset. That is, the amount would have earned interest, had it been invested outside the business is not considered.

(d)  Difficulty in the determination of scrap value

It may be quite difficult to assess the true scrap value of the asset after a long period say 10 or 15 years after the date of its installation.

Straight line method of depreciation is suitable in case of fixed assets in respect of which useful life can be determined and maintenance and repair cost is the same throughout the life of the asset.

A company has purchased a machinery for Rs.  1,80,000 and spent Rs.  10,000 for its installation. The estimated life of the machinery is 5 years with a residual value of Rs.  15,000. Find out the amount of depreciation to be provided every year. 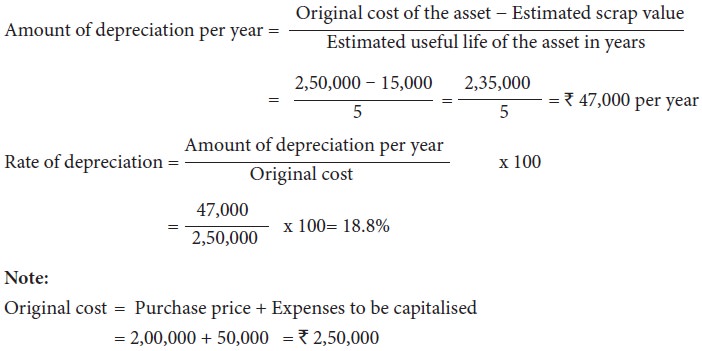 Find out the rate of depreciation under straight line method from the following details: