There are various types of Storage devices such as magnetic disks, magnetic tapes, automated tape libraries, CDs, and DVDs.

There are various types of Storage devices such as magnetic disks, magnetic tapes, automated tape libraries, CDs, and DVDs.

Ø Long Term, nonvolatile storage for files, even when no programs are running

Ø A level of the memory hierarchy below main memory used as a backing store for virtual memory during program execution. 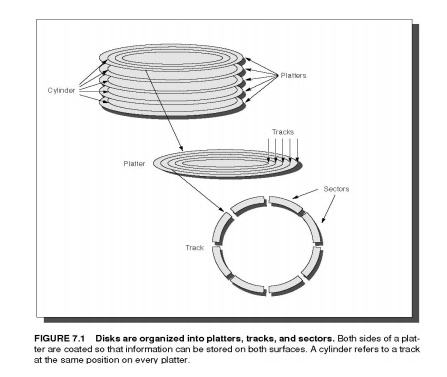 A magnetic disk consists of a collection of platters (generally 1 to 12), rotating on a spindle at 3,600 to 15,000 revolutions per minute (RPM). These platters are metal or glass disks covered with magnetic recording material on both sides, so 10 platters have 20 recording surfaces.

The disk surface is divided into concentric circles, designated tracks. There are typically 5,000 to 30,000 tracks on each surface. Each track in turn is divided into sectors that contain the information; a track might have 100 to 500 sectors. A sector is the smallest unit that can be read or written. IBM mainframes allow users to select the size of the sectors, although most systems fix their size, typically at 512 bytes of data. The sequence recorded on the magnetic media is a sector number, a gap, the information for that sector including error correction code, a gap, the sector number of the next sector, and so on.

To read and write information into a sector, a movable arm containing a read/ write head is located over each surface. To read or write a sector, the disk controller sends a command to move the arm over the proper track. This operation is called a seek, and the time to move the arm to the desired track is called seek time.

The time for the requested sector to rotate under the head is the rotation latency or rotational delay. The average latency to the desired information is obviously halfway around the disk; if a disk rotates at 10,000 revolutions per minute (RPM), the average rotation time is therefore

The Future of Magnetic Disks

The disk industry has concentrated on improving the capacity of disks. Improvement in capacity is customarily expressed as improvement in areal density, measured in bits per square inch:

Through about 1988 the rate of improvement of areal density was 29% per year, thus doubling density every three years. Between then and about 1996, the rate improved to 60% per year, quadrupling density every three years and matching the traditional rate of DRAMs. From 1997 to 2001 the rate increased to 100%, or doubling every year. In 2001, the highest density in commercial products is 20 billion bits per square inch, and the lab record is 60 billion bits per square inch.

One challenger to magnetic disks is optical compact disks, or CDs, and its successor, called Digital Video Discs and then Digital Versatile Discs or just DVDs. Both the CD-ROM and DVD-ROM are removable and inexpensive to manufacture, but they are read-only mediums. These 4.7-inch diameter disks hold 0.65 and 4.7 GB, respectively, although some DVDs write on both sides to double their capacity. Their high capacity and low cost have led to CD-ROMs and DVD-ROMs replacing floppy disks as the favorite medium for distributing software and other types of computer data.

The popularity of CDs and music that can be downloaded from the WWW led to a market for rewritable CDs, conveniently called CD-RW, and write once CDs, called CD-R. In 2001, there is a small cost premium for drives that can record on CD-RW. The media itself costs about $0.20 per CD-R disk or $0.60 per CD-RW disk. CD-RWs and CD-Rs read at about half the speed of CD-ROMs and CD-RWs and CD-Rs write at about a quarter the speed of CD-ROMs.

Magnetic tapes have been part of computer systems as long as disks because they use the similar technology as disks, and hence historically have followed the same density improvements. The inherent cost/performance difference between disks and tapes is based on their geometries:

·        Fixed rotating platters offer random access in milliseconds, but disks have a limited storage area and the storage medium is sealed within each reader.

·        Long strips wound on removable spools of “unlimited” length mean many tapes can be used per reader, but tapes require sequential access that can take seconds.

One of the limits of tapes had been the speed at which the tapes can spin without breaking or jamming. A technology called helical scan tapes solves this problem by keeping the tape speed the same but recording the information on a diagonal to the tape with a tape reader that spins much faster than the tape is moving. This technology increases recording density by about a factor of 20 to 50. Helical scan tapes were developed for low-cost VCRs and camcorders, which brought down the cost of the tapes and readers.

Tape capacities are enhanced by inexpensive robots to automatically load and store tapes, offering a new level of storage hierarchy. These nearline tapes mean access to terabytes of information in tens of seconds, without the intervention of a human operator.

Embedded devices also need nonvolatile storage, but premiums placed on space and power normally lead to the use of Flash memory instead of magnetic recording. Flash memory is also used as a rewritable ROM in embedded systems, typically to allow software to be upgraded without having to replace chips. Applications are typically prohibited from writing to Flash memory in such circumstances.

Like electrically erasable and programmable read-only memories (EEPROM), Flash memory is written by inducing the tunneling of charge from transistor gain to a floating gate. The floating gate acts as a potential well which stores the charge, and the charge cannot move from there without applying an external force. The primary difference between EEPROM and Flash memory is that Flash restricts write to multi-kilobyte blocks, increasing memory capacity per chip by reducing area dedicated to control. Compared to disks, Flash memories offer low power consumption (less than 50 milliwatts), can be sold in small sizes, and offer read access times comparable to DRAMs. In 2001, a 16 Mbit Flash memory has a 65 ns access time, and a 128 Mbit Flash memory has a 150 ns access time.