Buses were traditionally classified as CPU-memory buses or I/O buses. I/O buses may be lengthy, may have many types of devices connected to them, have a wide range in the data bandwidth of the devices connected to them, and normally follow a bus standard. CPU-memory buses, on the other hand, are short, generally high speed, and matched to the memory system to maximize memory-CPU bandwidth. During the design phase, the designer of a CPU-memory bus knows all the types of devices that must connect together, while the I/O bus designer must accept devices varying in latency and bandwidth capabilities. To lower costs, some computers have a single bus for both memory and I/O devices. In the quest for higher I/O performance, some buses are a hybrid of the two. For example, PCI is relatively short, and is used to connect to more traditional I/O buses via bridges that speak both PCI on one end and the I/O bus protocol on the other. To indicate its intermediate state, such buses are sometimes called mezzanine

The design of a bus presents several options, as Figure 7.8 shows. Like the rest of the computer system, decisions depend on cost and performance goals. The first three options in the figure are clear—separate address and data lines, wider data lines, and multiple-word transfers all give higher performance at more cost.

The final item in Figure 7.8, clocking, concerns whether a bus is synchronous or asynchronous. If a bus is synchronous, it includes a clock in the control lines and a fixed protocol for sending address and data relative to the clock. Since little or no logic is needed to decide what to do next, these buses can be both fast and inexpensive.

Standards that let the computer designer and I/O-device designer work independently play a large role in buses. As long as both designers meet the requirements, any I/O device can connect to any computer. The I/O bus standard is the document that defines how to connect devices to computers.

Ø How to create a standard

Ø Company tries to get standards committee to approve it’s latest philosophy in hopes that they’ll get the jump on the others (e.g. S bus, PC-AT bus, ...)

Some sample bus designs are shown below

Interfacing Storage Devices to the CPU

The I/O bus is connected to the main memory bus is shown in figure 7.15 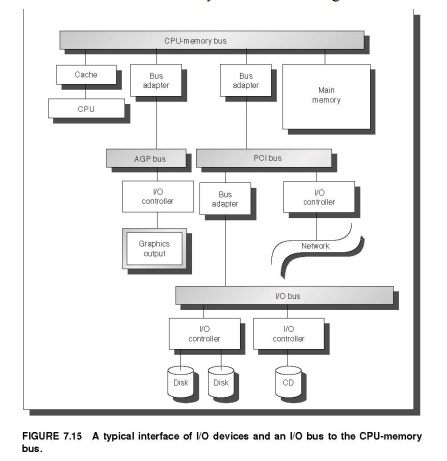 The simple interface, in which the CPU periodically checks status bits to see if it is time for the next I/O operation, is called polling.

Interrupt-driven I/O, used by most systems for at least some devices, allows the CPU to work on some other process while waiting for the I/O device. For example, the LP11 has a mode that allows it to interrupt the CPU whenever the done bit or error bit is set. In general-purpose applications, interrupt-driven I/O is the key to multitasking operating systems and good response times.

The drawback to interrupts is the operating system overhead on each event. In real-time applications with hundreds of I/O events per second, this overhead can be intolerable. One hybrid solution for real-time systems is to use a clock to periodically interrupt the CPU, at which time the CPU polls all I/O devices

The DMA hardware is a specialized processor that transfers data between memory and an I/O device while the CPU goes on with other tasks. Thus, it is external to the CPU and must act as a master on the bus. The CPU first sets up the DMA registers, which contain a memory address and number of bytes to be transferred. More sophisticated DMA devices support scatter/gather, whereby a DMA device can write or read data from a list of separate addresses. Once the DMA transfer is complete, the DMA controller interrupts the CPU. There may be multiple DMA devices in a computer system.