Benchmarks of storage performance and availability

Benchmarks of storage performance and availability

information from many terminals, with the TP system guaranteeing proper behavior on a failure.

This report led to the Transaction Processing Council, which in turn has led to seven benchmarks since its founding.

The TPC benchmarks were either the first, and in some cases still the only ones, that have these unusual characteristics:

Price is included with the benchmark results. The cost of hardware, software, and five-year maintenance agreements is included in a submission, which en-ables evaluations based on price-performance as well as high performance. 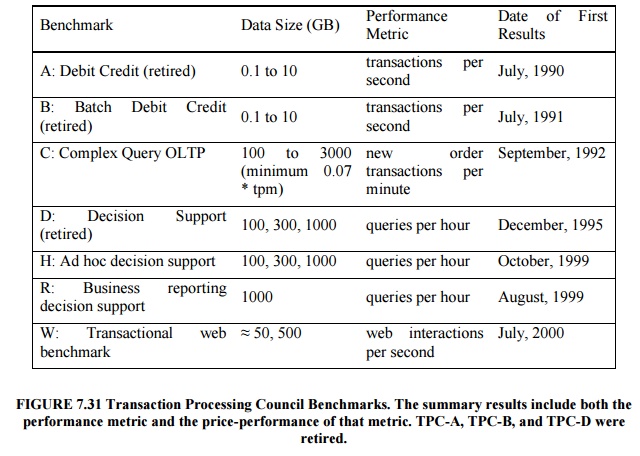 The data set generally must scale in size as the throughput increases. The benchmarks are trying to model real systems, in which the demand on the sys-tem and the size of the data stored in it increase together. It makes no sense, for example, to have thousands of people per minute access hundreds of bank ac-counts.

The benchmark results are audited. Before results can be submitted, they must be approved by a certified TPC auditor, who enforces the TPC rules that try to make sure that only

fair results are submitted. Results can be challenged and disputes resolved by going before the TPC council.

Throughput is the performance metric but response times are limited. For ex-ample, with TPC-C, 90% of the New-Order transaction response times must be less than 5 seconds.

An independent organization maintains the benchmarks. Dues collected by TPC pay for an administrative structure including a Chief Operating Office. This organization settles disputes,

conducts mail ballots on approval of changes to benchmarks, hold board meetings, and so on.

The SPEC benchmarking effort is best known for its characterization of processor performance, but has created benchmarks for other fields as well. In 1990 seven companies agreed on a synthetic benchmark, called SFS, to evaluate systems running the Sun Microsystems network file service NFS. This benchmark was upgraded to SFS 2.0 (also called SPEC SFS97) to include support for NSF version 3, using TCP in addition to UDP as the transport protocol, and making the mix of operations more realistic.

Figure 7.32 shows average response time versus throughput for four systems. Unfortunately, unlike the TPC benchmarks, SFS does not normalize for different price configurations. The fastest system in Figure 7.32 has 7 times the number of CPUs and disks as the slowest system, but SPEC leaves it to you to calculate price versus performance. As performance scaled to new heights, SPEC discovered bugs in the benchmark that impact the amount of work done during the measurement periods. Hence, it was retired in June 2001.

SPEC WEB is a benchmark for evaluating the performance of World Wide Web servers.

The SPEC WEB99 workload simulates accesses to a web service provider, where the server supports home pages for several organizations. Each home page is a collection of files ranging in size from small icons to large docu-ments and images, with some files being more popular than others. The workload defines four sizes of files and their frequency of activity:

less than 1 KB, representing an small icon: 35% of activity

100 KB to 1 MB: representing a large document and image,1% of activity 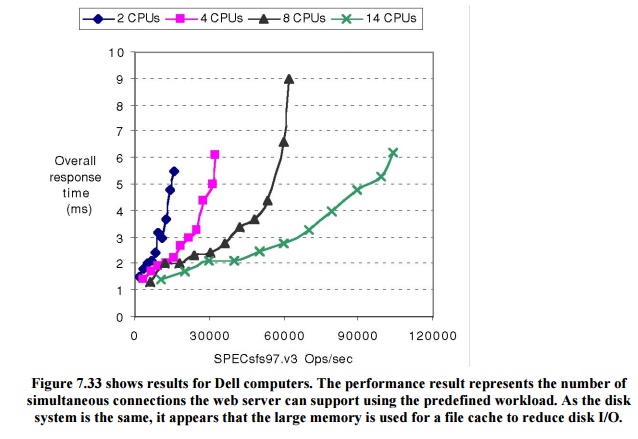 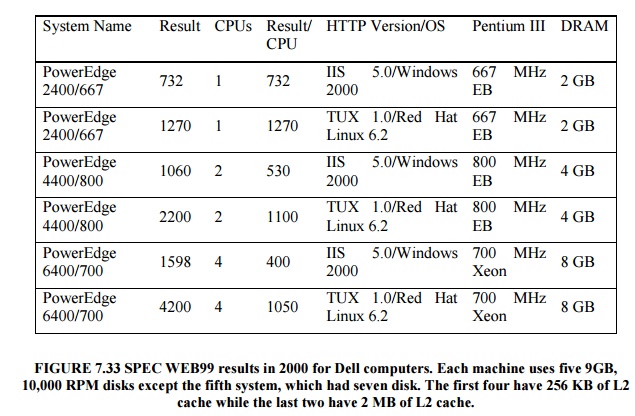