1. What is server utilization?

Mean number of tasks being serviced divided by service rate Server utilization = Arrival Rate/Server Rate The value should be between 0 and 1 otherwise there would be more tasks arriving than could be serviced.

2. What are the steps to design an I/O system?

Ø  Realistic design for availability and its evaluation.

3. Briefly discuss about classification of buses?

I/O buses - These buses are lengthy ad have any types of devices connected to it. CPU memory buses – They are short and generally of high speed.

Bus masters are devices that can initiate the read or write transaction. E.g CPU is always a bus master. The bus can have many masters when there are multiple CPU’s and when the Input

It offers higher bandwidth by using packets, as opposed to holding the bus for full transaction.

7. What is spilt transaction?

The idea behind this is to split the bus into request and replies, so that the buscan be used in the time between request and the reply

8.What do you understand by true sharing misses?

True sharing misses are a type of coherent misses that arise from the communication of data through the cache coherence mechanism. In an invalidation based protocol, the first write by a processor to a shared cache block causes an invalidation to establish ownership of that block. Additionally, when another processor attempts to read a modified word in that cache block, a miss occurs and the resultant block is transferred. Both these misses are classified as true sharing misses since they directly arise from the sharing of data among processors.

9. Assume that words xl and x2 are in the same cache block, which is in the shared state in the caches of both PI and P2. Assuming the following sequence of events, identify each miss as a true sharing miss, a false sharing miss, or a hit. Any miss that would occur if the block size were one word is designated a true sharing miss. 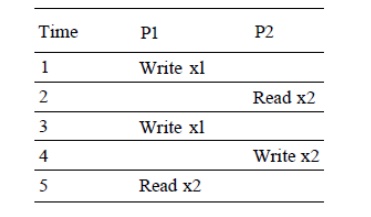 Here are classifications by time step:

1. This event is a true sharing miss, since xl was read by P2 and needs to be invalidated from P2.

2. This event is a false sharing miss, since x2 was invalidated by the write of xl in PI, but that value of xl is not used in P2.

3.  This event is a false sharing miss, since the block containing xl is marked shared due to the read in P2, but P2 did not read xl. The cache block containing xl will be in the shared state after the read by P2; a write miss is required to obtain exclusive access to the block. In some protocols this will be handled as an upgrade request, which generates a bus invalidate, but does not transfer the cache block.

4. This event is a false sharing miss for the same reason as step 3.

5. This event is a true sharing miss, since the value being read was written by P2.

Giving priority to read misses over writes to reduce miss penalty—A write buffer is a good place to implement this optimization. Write buffers create hazards because they hold the updated value of a location needed on a read miss—that is, a read-after-write hazard through memory. One solution is to check the contents of the write buffer on a read miss. If there are no conflicts, and if the memory system is available, sending the read before the writes reduces the miss penalty. Most processors give reads priority over writes.

11. What is the impact of doubling associativity while doubling the cache size on the size of the index in Cache mapping?

13.  What is sequential inter-leaving? It is implemented in which level of the memory hierarchy?

Sequential inter-leaving is implemented at Cache level. It is one of the optimization technique used to improve cache performance.

Multibanked Caches are used to Increase Cache Bandwidth. Clearly, banking works best when the accesses naturally spread themselves across the banks, so the mapping of addresses to banks affects the behavior of the memory system. A simple mapping that works well is to spread the addresses of the block sequentially across the banks, called sequential interleaving. For example, if there are four banks, bank 0 has all blocks whose address modulo 4 is 0; bank 1 has all blocks whose address modulo 4 is 1; and so on. Figure 5.6 shows this interleaving.