Cholesterol is by far the most common member of a group of steroids in animal tissues; it has a tetra cyclic ring system with a double bond in one of the rings and one free hydroxyl group.

Cholesterol is by far the most common member of a group of steroids in animal tissues; it has a tetra cyclic ring system with a double bond in one of the rings and one free hydroxyl group. It is found both in the Free State, where it has an essential role in maintaining membrane fluidity, and in esterifies form, i.e. as cholesterol esters. Other sterols are present in free and esterifies form in animal tissues, but at trace levelsonly. Cholesterol is the precursor of the bile acids and steroidal hormones. In plants, cholesterol is rarely present in other than small amounts, but such phytosterols as sit sterol, stigma sterol, avenasterol, camp sterol and brassicasterol, and their fatty acid esters are usually found, and they perform a similar function. Hopanoids are related lipids produced by some bacterial species. 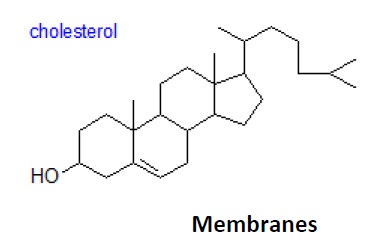 Lipids by definition are water insoluble; however, under certain conditions lipids and water are in fact miscible. Consider a typical water-insoluble fatty acid. At elevated pH values, the fatty acid forms soaps with ions such as Na+ and K+. Fatty acids consist of a polar head and a hydrocarbon or no polar tail. Thus, salts of fatty acids are soluble in both polar and no polar solvents. These types of substances are called amphiphatic compounds, i.e., compounds with both polar and nonpolar components. Amphiphatic substances form a number of different structures. Some of these structures are monolayers, micells, and bilayers. 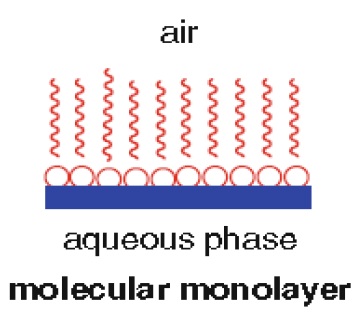 2.     Soaps and detergents may form structures known as micelles when they reach a defined concentration in solution. This concentration of amphiphatic compound, known as the critical micelle concentration (CMC), is required before micelle formation can occur. The compounds that form micelles are made up of fatty acids with a single hydrophobic tail (Fig. 1.7) 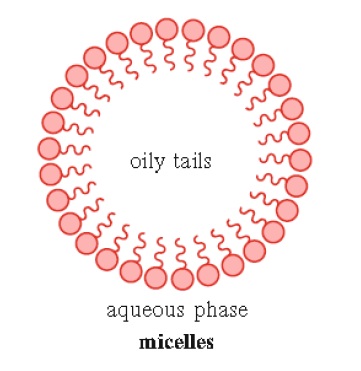 3.     Lipid bilayers may form from lipids that typically contain two hydrophobic tails. The most prominent members of this class are the sphingolipids and glycerophospholipids (Fig. 1.8). 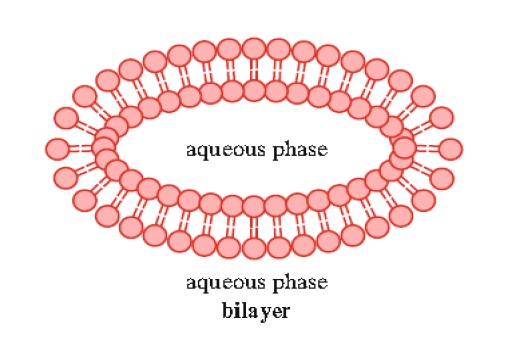 Studies have indicated that the bilayer thickness is approximately 60 A Â°. Lipid bilayers are structurally very similar to biological membranes and thus their properties have been studied extensively. Experimental bilayers, known as liposomes, have been prepared from phospholipids and sphingolipids by sonication.

4.     Biological membranes will not be discussed in detail; however, simply stated, they are similar to liposomes in that they contain a lipid bilayer, but unlike liposomes they contain two types of proteins. One, the integral proteins, are embedded in the bilayer and the other, the peripheral proteins, are associated either with the surface of the bilayer or with the integral protein itself. Miscellaneous lipids such as cholesterol are also components of biological membranes and affect its fluidity (Fig. 1.9). 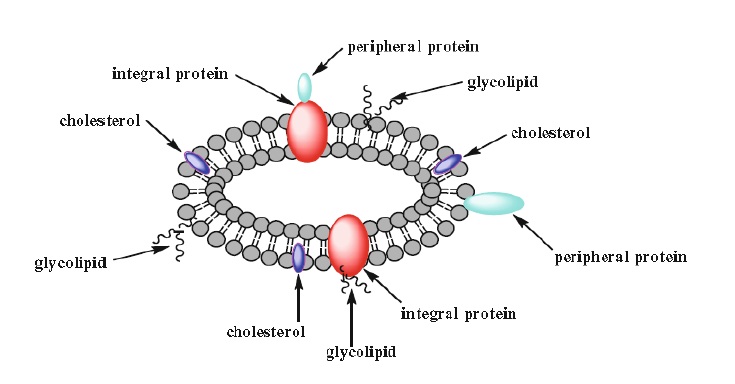