Moist heat occurs in the form of hot water, boiling water, or steam (vaporized water). In practice, the temperature of moist heat usually ranges from 60 to 135°C.

Heat is the most dependable method of sterilization and is usually the method of choice unless contraindicated. As a rule, higher temperatures (exceeding the maximum) are microbicidal, whereas lower temperatures (below the minimum) tend to have inhibitory or microbistatic effects. Two types of physical heat are used in sterilization—moist and dry heat.

Moist heat occurs in the form of hot water, boiling water, or steam (vaporized water). In practice, the temperature of moist heat usually ranges from 60 to 135°C. Adjustment of pressure in a closed container can regulate the temperature of steam. Moist heat kills microorganisms by denaturation and coagula-tion of proteins. Sterilization by moist heat can be classified as follows:

Pasteurization:Fresh beverages (such as milk, fruit juices,beer, and wine) are easily contaminated during collection and processing. Because microbes have potential for spoil-ing these foods or causing illness, heat is frequently used to reduce the microbial load and to destroy pathogens. Pasteurization is a technique in which heat is applied to liq-uids to kill potential agents of infection and spoilage, while at the same time retaining the liquid’s flavor and food value. This technique is named after Louis Pasteur who devised this method. This method is extensively used for steriliza-tion of milk and other fresh beverages, such as fruit juices, beer, and wine which are easily contaminated during collec-tion and processing.

The flash method is preferable for sterilization of milk because it is less likely to change the flavor and nutrient content, and it is more effective against certain resistant pathogens, such as Coxiella and Mycobacterium.

Although pasteurization inactivates most viruses and destroys the vegetative stages of 97–99% of bacteria and fungi, it does not kill endospores or thermoduric species (mostly nonpathogenic lactobacilli, micrococci, and yeasts). Milk is not sterile after regular pasteurization. In fact, it can contain 20,000 microbes per milliliter or more, which explains why even an unopened carton of milk will eventually spoil on prolonged storage. Newer techniques have now been used to produce sterile milk that has a stor-age life of 3 months. In this method, milk is processed with ultrahigh temperature (UHT) of 134°C for 1–2 seconds.

Boiling:Simple boiling of water for 10–30 minutes killsmost of the vegetative forms of bacteria but not bacterial spores. Exposing materials to boiling water for 30 minutes kills most nonspore-forming pathogens including resis-tant species, such as the tubercle bacillus and staphylo-cocci. Sterilization by boiling is facilitated by addition of 2% sodium bicarbonate to water. Since boiling only once at 100°C does not kill all spores, this method cannot be used for sterilization but only for disinfection. Hence, it is not recommended for sterilizing instruments used for surgical procedure. The greatest disadvantage of this method is that the items sterilized by boiling can be easily recontami-nated when removed from water after boiling.

Steam sterilizer at 100°C:Usually, Koch’s or Arnold’ssteam sterilizer is used for heat-labile substances that tend to degrade at higher temperatures and pressure, such as during the process of autoclaving. These substances are exposed to steam at atmospheric pressure for 90 minutes during which most vegetative forms of the bacteria except for the thermophiles are killed by the moist heat.

3. Sterilization at a temperature > 100°C: This method isotherwise known as sterilization by steam under pressure. A temperature of 100°C is the highest that steam can reach under normal atmospheric pressure at sea level. This pressure is measured at 15 pounds per square inch ( psi), or 1 atmosphere. In order to raise the temperature of steam above this point, it must be pressurized in a closed chamber. This phenomenon is explained by the physical principle that governs the behavior of gases under pres-sure. When a gas is compressed, its temperature rises in direct relation to the amount of pressure. So, when the pressure is increased to 5 psi above normal atmospheric pressure, the temperature of steam rises to 109°C. When the pressure is increased to 10 psi above normal, its tem-perature will be 115°C and at 15 psi (a total of 2 atmo-spheres), it will be 121°C. It is not the pressure by itself that is killing microbes, but the increased temperature it produces. This forms the principle of sterilization by steam under pressure. Such pressure–temperature combi-nations can be achieved only with a special device that can subject pure steam to pressures greater than 1 atmo-sphere. Health and commercial industries use an autoclave for this purpose and a comparable home appliance is the pressure cooker.

Autoclave:It is a cylindrical metal chamber with an airtightdoor at one end and racks to hold materials. The lid is fastened by screw clamp and rendered airtight by an asbestos washer. It has a discharge tap for air and steam at the upper side, a pressure gauge and a safety valve that can be set to blow off at any desired pressure. Heating is usually carried out by electricity. Steam circulates within the jacket and is supplied under pressure to the inner chamber where materials are loaded for sterilization (Fig. 3-1). The water in the autoclave boils when its vapor pressure equals that of surrounding atmosphere. Following the increase of pressure inside the closed vessel, the temperature at which the water boils inside the autoclave also increases. The saturated steam that has a higher penetrative power, on coming in contact with a cooler surface condenses to water and releases its latent heat to that surface. For example, nearly 1600 mL steam at 100°C and at atmospheric pressure condenses into 1 mL of water at 100°C and releases 518 calories of heat. The gross reduction in volume of steam sucks in more steam to the area and this process continues till the temperature of that surface is elevated to that of the steam. Sterilization is achieved when the steam condenses against the objects in the chamber and gradually raises their temperature. The condensed water facilitates moist conditions that ensures killing of microbes. 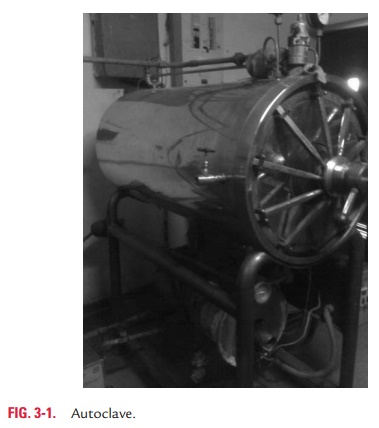 Sterilization condition: Experience has shown that the mostefficient pressure–temperature combination for achiev-ing sterilization by autoclave is 15 psi, which yields 121°C. It is possible to use higher pressure to reach higher tem-peratures (for instance, increasing the pressure to 30 psi raises the temperature by 11°C), but doing so will not significantly reduce the exposure time and can harm the items being sterilized. It is important to avoid over packing or haphazardly loading the chamber, because it prevents steam from circulating freely around the contents and impedes the full contact that is necessary. The holding time varies from 10 minutes for light loads to 40 minutes for heavy or bulky ones; the average time being 20 minutes. 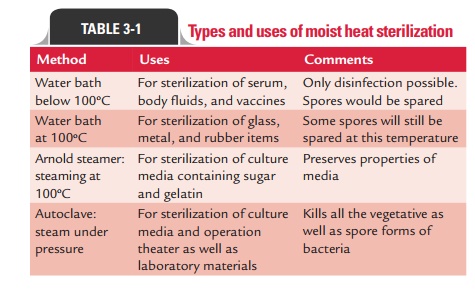 However, the autoclave is ineffective for sterilizing substances that repel moisture (oils, waxes, or powders). Types and uses of various moist heat sterilization methods are summarized in Table 3-1.

a.     Thermocouples are used to record temperatures directly in autoclaves by a potentiometer.

b.     Brown’s tube is the most commonly used chemical indicator of moist heat sterilization in the autoclave. It contains red solution that turns green when exposed to temperature of 121°C for 15 minutes in an autoclave.

c.      Bacillus stearothermophilusspores are used as theindicators of moist heat sterilization in the autoclave. This is a thermophilic bacterium with an optimum temperature of 55–60°C, and its spores require an exposure of 12 minutes at 121°C to be destroyed. The efficacy of the autoclave is carried out by placing paper strips impregnated with 106spores in envelopes and keeping those envelopes in different parts of the load inside the autoclave. These strips after sterilization are inoculated into a suitable recovery medium and incubated at 55°C for 5 days. Spores are destroyed if the sterilizing condition of the autoclave is proper.

Tyndallizationis carried out over a period of 3 days andrequires a chamber to hold the materials and a reservoir for boiling water. Items to be sterilized are kept in the cham-ber and are exposed to free-flowing steam at 100°C for 20 minutes, for each of the three consecutive days. On the first day, the temperature is adequate to kill all the vegetative forms of the bacteria, yeasts, and molds but not sufficient to kill spores. The surviving spores are allowed to germi-nate to vegetative forms on the second day and are killed on re-exposure to steam. The third day re-ensures killing of all the spores by their germination to vegetative forms.