Sri Ramanujar, a native of Sriperumpudur, underwent philosophical training under Yatavaprakasar in Kanchipuram in Sankara school of thought.

Sri Ramanujar, a native of Sriperumpudur, underwent philosophical training under Yatavaprakasar in Kanchipuram in Sankara school of thought. The young Ramanujar did not agree with the teachings of his guru and was fascinated by the teachings of the Srirangam school of thought. Yamunacharya who once found him in Kanchi invited him to Srirangam. But as soon as he reached Sri Rangam, Yamunacharya passed away. Ramanujar was then declared the head of monastery in Srirangam. He took control of monastery, temple and united the sect with efforts at modifying the rituals in temples. Ramanuja was a teacher-reformer and a great organiser. He challenged the monist ideology of Adi Sankara and in his effort to widen the social base to include social groups other than Brahmans. Described as qualified monism, his philosophy of Visishtadvaita influenced many thinkers and developed into a separate tradition. A century after his death, there was a schism which developed into two separate schools under Vedanta Desikar and Manavala Mamuni. Ramanuja took interest in propagating the doctrine of Bhakti to social groups outside the varnashrama system. He influenced some temple authorities to permit the social groups outside the varnashrama system to enter into temple at least once a year. It is believed that due to the perceived threat to their religious faith and existence, Ramanujar had to leave his place of residence. 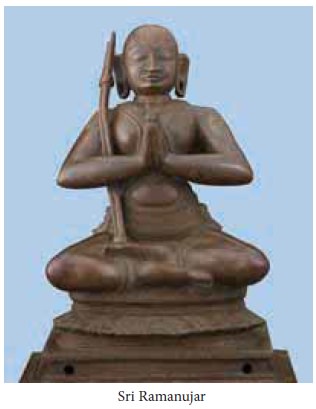