Azhwars composed moving hymns addressed to Vishnu. They were compiled in the Nalayira Divviyaprabandham by Nadamuni, at the end of the ninth century. 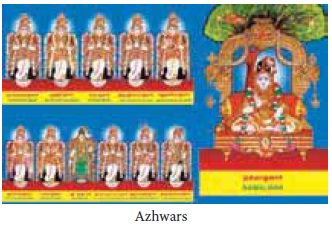 Nadamuni who served as a priest at the Ranganatha temple in Srirangam is credited with compiling this work comprising four thousand poems. Periyalvar lived in Srivilliputtur during the reign of Pandyan king Maravarman Srivallabha in the ninth century. The themes are mostly Krishna’s childhood. Krishna is the hero in Andal’s hymns. Her songs convey her abiding love for Krishna. Nammalvar, from Kurugur (Alvar Tirunagari), now in Thoothukudi district, is considered the greatest amongst Alvars. Nammalvar authored four works that include the Tiruvaymoli. Vaishnava devotees believe that his hymns distil the essence of the four Vedas. From the twelfth century, the Vaishnava hymns were the subject of elaborate and erudite commentaries.

The prominent Saiva poets include Tirunavukarasar (Appar), Tirugnanasambandar and Sundarar, and Manikkavasagar. Nambi Andar Nambi compiled their hymns into an anthology of eleven books, towards the end of tenth century. 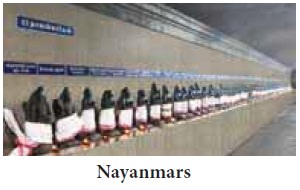 The first seven books, commonly known as Thevaram, contain the hymns of Sambandar (I to III), Appar (books IV to VI) and Sundarar (book VII) and Manikkavasagar (book VIII). Sekkilar’s Periyapuranam is the twelfth thirumurai of the Saiva canon. It is a hagiography of the sixty-three Nayanmars but contains an undercurrent of historical information as well. This collection of 12 books is named Panniru Tirumurai. The Periyapuranam relates many stories about Nayanmars and the miraculous episodes in their lives.

The devotional movement manifested itself as a great social transformation. The apogee of its movement was the coming up of temples that became prominent in the Tamil landscape. Temples, in later Chola times, became great social institutions. Politically, the Bhakti movement prompted the rulers to establish the settlements for the invited Brahmin groups from the north of the Indian sub-continent. Royal members, local administrative bodies and individuals initiated the calendrical celebrations and festivals to be conducted in the temples for which they started making endowments to meet their expenditure. It directly speeded up the emergence of state in Tamil country and indirectly integrated the different social groups into the religious fold through the instrumentality of temple institutions. Over the centuries the Bhakti movement spread all over India, and resulted in a transformation of Hinduism.