The iconic Shore Temple of Pallavas at Mamallapuram (Mahabalipuram) was constructed during the reign of Rajasimha (700-728).

The iconic Shore Temple of Pallavas at Mamallapuram (Mahabalipuram) was constructed during the reign of Rajasimha (700-728). The temple comprises three shrines, where the prominent ones are dedicated to Siva and Vishnu. The exterior wall of the shrine, dedicated to Vishnu, and the interior of the boundary wall are elaborately carved and sculpted. In southern India, this is one amongst the earliest and most important structural temples. Unlike other structures of the region, the Shore Temple is a five-storeyed rock-cut monolith. The monolithic vimanas are peculiar to Mamallapuram.

The Rathas there are known as the Panchapandava Rathas. The Arjuna Ratha contains artistically carved sculptures of Siva, Vishnu, mithuna and dwarapala. The most exquisite of the five is the Dharmaraja Ratha, with a three-storied vimana and a square base. The Bhima Ratha is rectangular in plan and has beautiful sculptures of Harihara, Brahma, Vishnu, Skanda, Ardhanarisvara and Siva as Gangadhara. 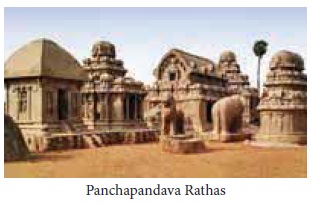 The most important piece of carving in Mamallapuram is the Descent of the Ganga (variously described as ‘Bhagirata’s Penance’ or ‘Arjuna’s Penance’). The portrayal of puranic figures with popular local stories reveals the skill of the artists in blending various aspects of human and animal life. The sculptural panel in the Krishna mandapa, where village life with cows and cowherds is depicted with beauty and skill, is yet another artistic wonder to behold. 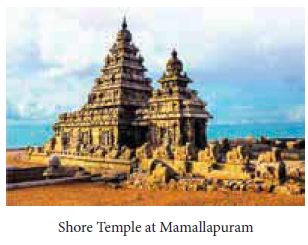 Rock-cut temples were common in the Pallava period. The structural temples and the free-standing temples at Aihole and Badami in the Deccan and at Kanchipuram and Mamallapuram provide testimony to the architectural excellence achieved during the period.

The Deccan style of sculpture shows a close affinity to Gupta art. Pallava sculpture owed a lot to the Buddhist tradition. Yet the sculpture and the architecture of the Deccan and Tamil Nadu were not mere offshoots of the northern tradition. They are distinctly recognizable as different and have an originality of their own. The basic form was taken from the older tradition, but the end result unmistakably reflected its own native brilliance.