There are two Chalukya families: Chalukyas of Badami (Vatapi) and Chalukyas of Kalyani. This lesson concerns only the Chalukyas of Badami. Chalukya dynasty emerged as a strong power with its founder Pulikesin I (c. 535-566 CE) fortifying a hill near Badami. He declared independence from the Kadmabas. It is said that he conducted yagnas and performed the asvameda sacrifice. The capital Badami was founded by Kirtivarman (566-597). Pulikesin I’s grandson Pulikesin II (609-(642), after defeating Mangalesha, proclaimed himself as king, an event that is described in the Aihole inscription. One of the most outstanding victories of Pulikesin II was the defeat of Harshavardhana’s army on the banks of the Narmada. The kings of Malwa, Kalinga, and eastern Deccan accepted his suzerainty. His victories over Kadambas of Banvasi, and Gangas of Talakad (Mysore) are also worthy of note. However, his attempt to attack Kanchipuram was thwarted by Mahendravarma Pallava. This led to a prolonged war between the Chalukyas and the Pallavas. Narasimha Varman I (630-668), the Pallava King, attacked and occupied Badami. Pulikesin II died in the battle. 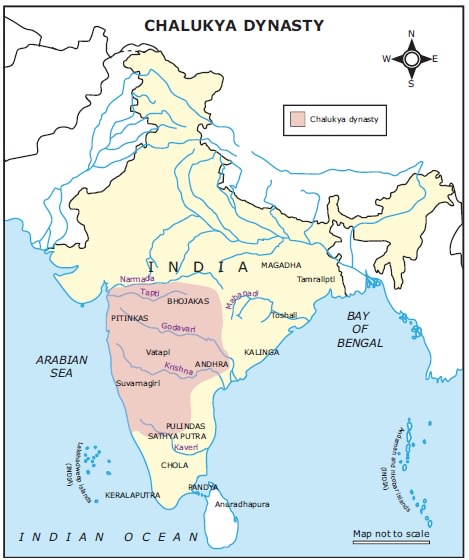 Pallava control over Badami and the southern parts of the Chalukya empire continued for several years. In the mid-eighth century, the Badami Chalukyas were overpowered and replaced by the Rashtrakutas.

The king was the head of the administration. In dynastic succession primogeniture was not strictly followed. Generally, the elder was to be appointed as yuvaraja while the king was in the office. The heir apparent got trained in literature, law, philosophy, martial arts and others. Chalukyan kings claimed to rule according to dharma-sastra and niti-sastra. Pulikesin I (543-566) was well-versed in manu-sastra, puranas, and itihasas. In the beginning, the Chalukya kings assumed titles such as Maharajan, Sathyasrayan and Sri-Pritivi-Vallaban. After defeating Harshavardhana, Pulikesin II assumed the title of Parameswaran. Bhattarakan and Maharajathirajan, soon became very popular titles. In the Pallava kingdom, kings took high-sounding titles such as Dharma maharajaadhi raja, Maharajadhiraja, Dharma maharaja, Maharaja. In the Hirahadagalli plates the king is introduced as the performer of agnistoma, vajapeya and asvamedha sacrifices.

The wild boar was the royal insignia of the Chalukyas. It was claimed that it represented the varaha avatar of Vishnu in which he is said to have rescued the Goddess of the Earth. The bull, Siva’s mount, was the symbol of the Pallavas.

Chalukya dynasty of Jayasimhan I line appointed royal ladies as provincial governors. They also issued coins in some instances. Vijya Bhattariga, a Chalukya princess, issued inscriptions. Pallava queens did not take active part in the administration of the kingdom, but they built shrines, and installed images of various deities, and endowed temples. The image of Queen Rangapataka, the queen of Rajasimha, is found in the inscription in Kailasanatha temple in Kanchipuram.

The King and His Ministers

All powers were vested in the king. Inscriptions do not specifically speak of a council of ministers, but they do refer to an official called maha-sandhi-vigrahika. Four other categories of ministers are also referred to in the epigraphs: Pradhana (head minister), Mahasandhi-vigrahika (minister of foreign affairs), Amatya (revenue minister), and Samaharta (minister of exchequer). Chalukyas divided the state into political divisions for the sake of administration: Vishayam, Rastram, Nadu and Grama. Epigraphs speak of the officials like vishayapatis, samantas, gramapohis and mahatras. Vishayapatis exercised the power at the behest of the kings. Samantas were feudal lords functioning under the control of the state. Grampohis and gramkudas were village officials. Mahatras were the prominent village men.

Generally, the king appointed his sons as the provincial governors. The governors called themselves raja, marakka-rajan and rajaditya-raja-parameswaran. Some governors held the title maha-samanta and maintained troops. The chief of vishaya was vishayapati. In turn, vishaya was divided into pukti. Its head was pogapati.

The traditional revenue officials of the villages were called the nala-kavundas. The central figure in village administration was kamunda or pokigan who were appointed by the kings. The village accountant was karana and he was otherwise called gramani. Law and order of the village was in the hands of a group of people called mahajanam. There was a special officer called mahapurush, in charge of maintaining order and peace of the village. Nagarapatis or Purapatis were the officials of the towns.

The Chalukyas patronised both Saivism and Vaishnavism. They built temples for Siva and Vishnu. Brahmin groups were invited from the Gangetic regions and settled to perform regular pujas and conduct festivals and ceremonies in the temples. Notable Chalukya rulers like Kirtivarman (566-597), Mangalesa (597-609), and Pulikesin II (609-642) performed yagnas. They bore titles such as parama-vaishana and parama-maheswara. Chalukyas gave prominent place to Kartikeyan, the war god. Saiva monasteries became centres for popularising Saivism. Chalukyas patronised heterodox sects also and lavishly donated lands to the Jain centres. Ravikirti, the poet-laureate of Pulikesin II, was a Jain scholar. In the reign of Kirtivarman II (744-755) a Jain village official built a Jain temple in a place called Annigere. The prince Krishna (756-775) appointed Gunapatra, a Jain monk, as his master. Pujyapatar the author of Jainentriya-viyakarnam was a Jain monk, a contemporary of Vijayadityan (755-772). According to Hiuen Tsang, there were many Buddhist centres in the Chalukya territory wherein more than 5000 followers of the Hinayana and Mahayana sects lived.

Chalukyas used Sanskrit in pillar inscriptions such as in Aihole and Maha-kudam. A seventh-century inscription of a Chalukya king at Badami mentions Kannada as the local prakrit, meaning the people’s language, and Sanskrit as the language of culture. A chieftain of Pulikesin II authored a grammar work Saptavataram in Sanskrit.

Built in 634, Aihole, the headquarters of the famous medieval Ayyavole merchants’ guild was an important commercial centre. About seventy temples are located in Aihole. The earliest stone-built temple is Lad Khan temple. Its unique trait is a stucco pillar with a big capital distinct from northern style. 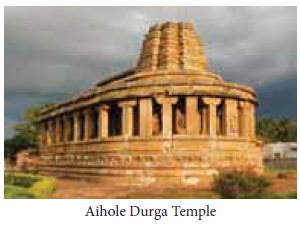 A temple dedicated to the goddess Durga was built on the model of Buddha Chaitya. It stands on a raised platform in the form of semi-circle. Another temple, dedicated to the same goddess is called Huccimalligudi, which is rectangular in shape. Chalukyas also built Jain temples. Megudi Jain temple is illustrative of the evolution of temple architecture under the Chalukyas. The mandapa-type caves are preserved at Aihole.

There are four caves in Badami. The largest cave temple built by Mangalesa is dedicated to Vishnu. The reclining posture of Vishnu on the snake bed and Narasimha are exquisite examples of Chalukya art. Irrespective of religion, architectural features share a common style. It establishes the technical importance and the secular attitude of both patron and architect.

Pattadakal, a quiet village in Bagalkot district of Karnataka, is famous for its exquisite temples. Pattadakal was a centre for performing royal rituals. The Virupaksha temple was built at the order of queen Lohamahadevi to commemorate the conquest of Kanchipuram by her husband Vikramaditya II. The unique feature of the structural temple built by Rajasimha at Mamallapuram was adopted here by the Chalukyas. 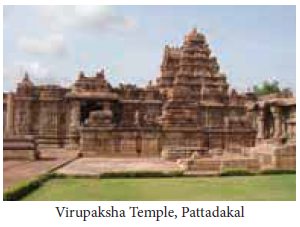 Monuments are generally associated with the rulers who built them. However, here we also have signatures of the architects who conceived the edifices and the skilled craftspeople who created them. The east porch of the Virupaksha temple has a Kannada inscription eulogizing the architect who designed the temple. The architect was given the title Tribhuavacharya (maker of the three worlds). Several reliefs on the temple walls bear signatures of the sculptors who carved them.

At the south-eastern corner of the village is the Papanatha temple. Similar to the Virupaksha temple in its basic plan, it has a shikara in the northern style. The outer walls are richly decorated with many panels depicting scenes and characters from the Ramayana. The eastern wall has a short Kannada inscription, giving the name of the architect Revadi Ovajja, who designed the shrine. In Pattadakal, Chalukyas built more than ten temples which demonstrate the evolution in Chalukya architecture. On the basis of style these temples are classified into two groups: Indo-Aryan and Dravidian.

Paintings are found in a cave temple dedicated to Vishnu in Badami. Chalukyas adopted the Vakataka style in painting. Many of the paintings are of incarnations of Vishnu. The most popular Chalukya painting is in the palace built by the King Mangalesan (597-609). It is a scene of ball being watched by members of royal family and others.