The rock-cut cave temples in Ellora are in 34 caves, carved in Charanadri hills.

The rock-cut cave temples in Ellora are in 34 caves, carved in Charanadri hills. Without knowledge of trigonometry, structural engineering, and metallurgy, the Indian architects could not have created such exquisite edifices. The patrons of these caves range from the dynasties of Chalukyas to Rashtrakutas. The heterodox sects first set the trend of creating this model of temples. Later, orthodox sects adopted it as a medium of disseminating religious ideologies. These temples were linked to Ajivikas, Jainism, Buddhism, and Brahmanism. The earliest temples are modest and simple with no artistic claims. But, the later temples are elegant edifices. Mural paintings in Ellora are found in five caves, but only in the Kailash temple are they preserved. Some murals in Jain temples are well preserved. Not only animals, birds, trees, flowers are pictured elegantly, but human emotions and character - greed, love, compassion-are depicted with professional skill.

There are 12 Buddhist caves. Every Buddhist cave temple is of a unique model in architecture. Some are modest; while others are double-storeyed or triple-storeyed. The plans of the caves demonstrate that these were designed as religious centres where monks stayed and the disciples were trained in religious treatises and scriptures. The main hall in the centre and the cubical rooms on either side were used as monasteries for teaching and preaching. This is attested by a figure, in cave number six, of man reading a manuscript on a folding table. The panels in these caves portray scenes from the life of the Buddha. Three different characters are indentified by the sculptures in the caves. The central figure is Buddha found in three sagacious postures: meditating (dhyana mudra), preaching (vyakhyana mudra) and touching the earth by index finger of right hand (bhumi-sparsha mudra).

Buddhist caves represented goddesses by way of the carved images of Tara, Khadiravani-tara, Chunda, Vajradhat-vishvari, Maha-mayuri, Sujata, Pandara and Bhrikuti. In cave twelve, a stout female figure is depicted wearing a waistband and headgear of a cobra. Khadrivani-tara also holds a cobra in one of her hands in the same cave. 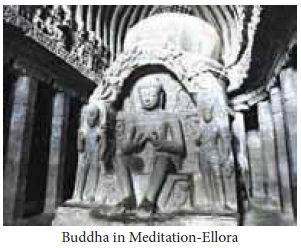 A few Jain caves are also seen in Ellora group and are distinct from others. But they are incomplete. The figures of Yaksha-matanga, Mahavira, Parsvanatha, and Gomatesvara are surrounded by attendants.

The earliest caves in these groups are modest and simple. Mostly, they are square-shaped except Kailasanatha cave (cave-16), which is a massive monolithic structure, carved out of a single solid rock. This temple is said to represent Kailash, the abode of Lord Shiva. The temple is two storeyed and the Kailasa temple is on the first one. The lower storey has carved life-size elephants, which looks like they are holding up the temple on their backs. The temple exterior has richly carved windows, images of deities from the Hindu scriptures and Mithunas (amorous male and female figures). Most of the deities to the left of the temple entrance are Saivite and the deities to the right of the entrance are Vaishnavite. The courtyard has two huge pillars with the flagstaff and a Nandi mandapa. The wedding ceremony of Siva-Parvati, the attempted lifting of the Kailasa mountain by Ravana, and the destruction of Mahisasura by the goddess Durga are beautiful specimens. Weapons and musical instruments of the gods are also depicted through the panel sculptures. An interesting sculpture is that of the river goddess Ganga mounted on a crocodile and the river goddess Yamuna mounted on a tortoise.