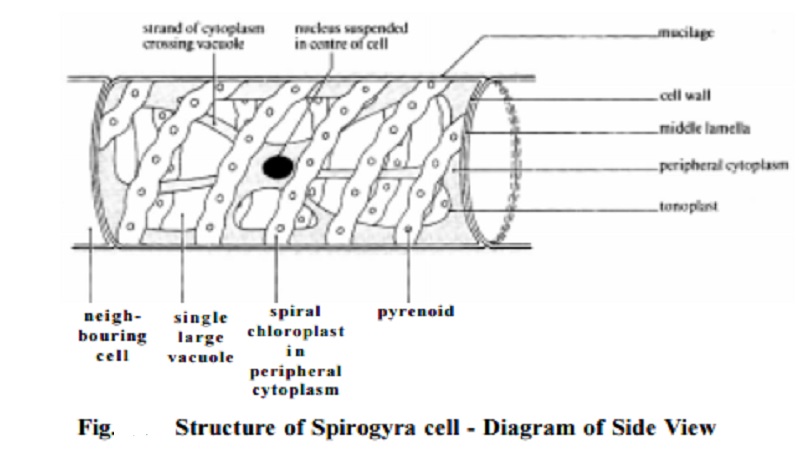 Spirogyra is a very common free floating fresh water alga found in fresh water pools, ponds, lakes etc., in great abundance. It is also known as 'water silk' or 'pond silk" . The filaments are slimy in nature because of the presence of a mucilaginous substance around them. Spirogyra adnata is an attached form and found in flowing waters. In later stage this species also becomes free floating. Some of the species develop rhizoid like haptera, occasionally at the basal ends of the filaments. Spirogyra is a chlorophyllous alga. S. columbiana is reported from South India and S. jogensis has been reported from Jog falls, Mysore.

The filaments of Spirogyra are unbranched with many cells placed end to end. All the cells are similar in structure. The cells are cylindrical in shape and some time several times longer than their breadth. The cell wall of the filament is usually two- layered. The outer most layer consists of pectic substances and the layer just outside the protoplast consists of cellulose, the outer most portion of pectic substances dissolve in water to form slimy sheath. This is some times referred to as the third layer of the cell wall. The cells are uninucleate, the nucleus is usually situated in the centre of the cell and connected by cytoplasmic strands to the dense cytoplasm of the peripheral region. There is a big central vacuole the cytoplasmic strands are also called as primordial utricle. In Spirogyra the chlorololats are spiral and ribbon like, they may be serrated or smooth at the margins. The number of chloroplasts ranges 1-14 in different species. Many pyrynoids are found in each ribbon like chloroplast. Some times the filaments of some species of Spirogyra exhibit gliding movements.