Spectinomycin is an aminocyclitol antibiotic that is structurally related to aminoglycosides.

Spectinomycin is an aminocyclitol antibiotic that is structurally related to aminoglycosides. It lacks amino sugars and glycosidic bonds. 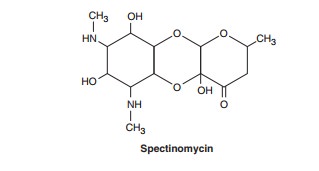 Spectinomycin is active in vitro against many gram-positive and gram-negative organisms, but it is used almost solely as an alternative treatment for drug-resistant gonorrhea or gonorrhea in penicillin-allergic patients. The majority of gonococcal isolates are inhibited by 6 mcg/mL of spectinomycin. Strains of gonococci may be resistant to spectinomycin, but there is no cross-resistance with other drugs used in gonorrhea. Spectinomycin is rapidly absorbed after intramuscular injection. A single dose of 40 mg/kg up to a maximum of 2 g is given. There is pain at the injection site and, occasionally, fever and nausea. Nephrotoxicity and anemia have been observed rarely. Spectinomycin is no longer available for use in the United States but may be available elsewhere.