The aminoglycosides include streptomycin, neomycin, kanamy-cin, amikacin, gentamicin, tobramycin, sisomicin, netilmicin, and others. They are used most widely in combination with a β-lactam antibiotic in serious infections with gram-negative bac-teria, in combination with vancomycin or a β-lactam antibiotic for gram-positive endocarditis, and for treatment of tuberculosis.

A. Physical and Chemical Properties

Aminoglycosides have a hexose ring, either streptidine (in streptomy-cin) or 2-deoxystreptamine (in other aminoglycosides), to whichvarious amino sugars are attached by glycosidic linkages (Figures 45–1 and 45–2). They are water-soluble, stable in solu-tion, and more active at alkaline than at acid pH. 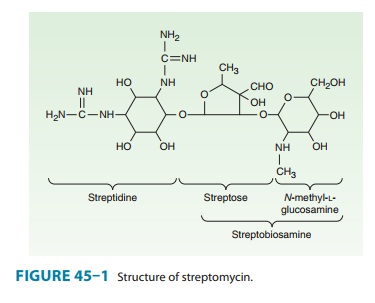 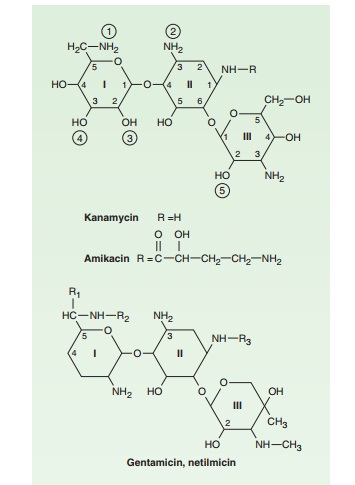 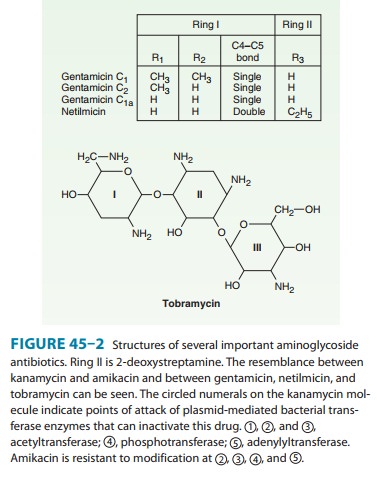 B. Mechanism of Action

The mode of action of streptomycin has been studied far more closely than that of other aminoglycosides, but they probably all act similarly. Aminoglycosides are irreversible inhibitors of protein synthesis, but the precise mechanism for bactericidal activity is not known. The initial event is passive diffusion via porin channels across the outer membrane (see Figure 43–3). Drug is then actively transported across the cell membrane into the cytoplasm by an oxygen-dependent process. The transmembrane electro-chemical gradient supplies the energy for this process, and trans-port is coupled to a proton pump. Low extracellular pH and anaerobic conditions inhibit transport by reducing the gradient. Transport may be enhanced by cell wall-active drugs such as peni-cillin or vancomycin; this enhancement may be the basis of the synergism of these antibiotics with aminoglycosides.

Inside the cell, aminoglycosides bind to specific 30S-subunit ribosomal proteins (S12 in the case of streptomycin). Protein synthesis is inhibited by aminoglycosides in at least three ways (Figure 45–3): (1) interference with the initiation complex of peptide 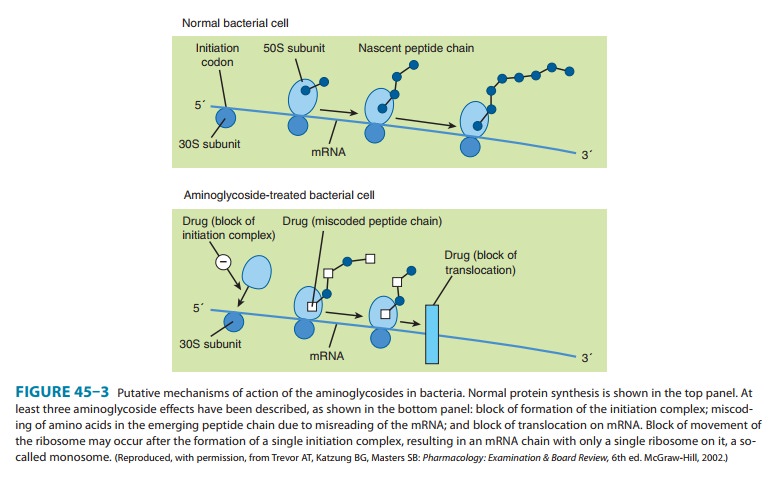 formation; (2) misreading of mRNA, which causes incorporation of incorrect amino acids into the peptide and results in a nonfunctional or toxic protein; and (3) breakup of polysomes into nonfunctional monosomes. These activities occur more or less simultaneously, and the overall effect is irreversible and lethal for the cell.

Three principal mechanisms have been established: (1) production of a transferase enzyme or enzymes inactivates the aminoglycoside by adenylylation, acetylation, or phosphorylation. This is the prin-cipal type of resistance encountered clinically. (Specific transferase enzymes are discussed below.) (2) There is impaired entry of aminoglycoside into the cell. This may be genotypic, resulting from mutation or deletion of a porin protein or proteins involved in transport and maintenance of the electrochemical gradient; or phenotypic, eg, resulting from growth conditions under which the oxygen-dependent transport process described above is not func-tional. (3) The receptor protein on the 30S ribosomal subunit may be deleted or altered as a result of a mutation.

Aminoglycosides are absorbed very poorly from the intact gastro-intestinal tract, and almost the entire oral dose is excreted in feces after oral administration. However, the drugs may be absorbed if ulcerations are present. After intramuscular injection, aminoglyco-sides are well absorbed, giving peak concentrations in blood within 30–90 minutes. Aminoglycosides are usually administered intravenously as a 30- to 60-minute infusion; after a brief distribu-tion phase, this results in serum concentrations that are identical with those following intramuscular injection. The normal half-life of aminoglycosides in serum is 2–3 hours, increasing to 24–48 hours in patients with significant impairment of renal function. Aminoglycosides are only partially and irregularly removed by hemodialysis—eg, 40–60% for gentamicin—and even less effec-tively by peritoneal dialysis. Aminoglycosides are highly polar compounds that do not enter cells readily. They are largely excluded from the central nervous system and the eye.

In the effect of each individual drug, ie, the killing effect of the combina-tion is more than additive. presence of active inflammation, however, cerebrospinal fluid levels reach 20% of plasma levels, and in neonatal meningitis, the levels may be higher. Intrathecal or intraventricular injection is required for high levels in cerebrospinal fluid. Even after parenteral admin-istration, concentrations of aminoglycosides are not high in most tissues except the renal cortex. Concentration in most secretions is also modest; in the bile, it may reach 30% of the blood level. With prolonged therapy, diffusion into pleural or synovial fluid may result in concentrations 50–90% of that of plasma.

Traditionally, aminoglycosides have been administered in two or three equally divided doses per day in patients with normal renal function. However, administration of the entire daily dose in a single injection may be preferred in many clinical situations. Aminoglycosides have concentration-dependent killing; that is, increasing concentrations kill an increasing proportion of bacteria and at a more rapid rate. They also have a significant postantibioticeffect, such that the antibacterial activity persists beyond the timeduring which measurable drug is present. The postantibiotic effect of aminoglycosides can last several hours. Because of these proper-ties, a given total amount of aminoglycoside may have better efficacy when administered as a single large dose than when administered as multiple smaller doses. When administered with a cell wall-active antibiotic (a β lactam or vancomycin), aminogly-cosides exhibit synergistic killing against certain bacteria. The effect of the drugs in combination is greater than the anticipated

Adverse effects from aminoglycosides are both time- and concentration-dependent. Toxicity is unlikely to occur until a certain threshold concentration is reached, but once that concen-tration is achieved, the time beyond this threshold becomes criti-cal. This threshold is not precisely defined, but a trough concentration above 2 mcg/mL is predictive of toxicity. At clini-cally relevant doses, the total time above this threshold is greater with multiple smaller doses of drug than with a single large dose.

Numerous clinical studies demonstrate that a single daily dose of aminoglycoside is just as effective—and probably less toxic— than multiple smaller doses. Therefore, many authorities now recommend that aminoglycosides be administered as a single daily dose in many clinical situations. However, the efficacy of once-daily aminoglycoside dosing in combination therapy of enterococ-cal and staphylococcal endocarditis remains to be defined, and the standard low-dose, thrice-daily administration is still recom-mended. In contrast, there are limited data supporting once-daily dosing in streptococcal endocarditis. The role of once-daily dosing in pregnancy and in neonates also is not well defined.

Once-daily dosing has potential practical advantages. For example, repeated determinations of serum concentrations are probably unnecessary unless aminoglycoside is given for more than 3 days. A drug administered once a day rather than three times a day is less labor intensive. And once-a-day dosing is more feasible for outpatient therapy.

Aminoglycosides are cleared by the kidney, and excretion is directly proportional to creatinine clearance. To avoid accumulation and toxic levels, once-daily dosing of aminoglycosides is generally avoided if renal function is impaired. Rapidly changing renal function, which may occur with acute kidney injury, must also be monitored to avoid overdosing or underdosing. Provided these pitfalls are avoided, once-daily aminoglycoside dosing is safe and effective. If the creatinine clearance is > 60 mL/min, then a single daily dose of 5–7 mg/kg of gentamicin or tobramycin is recom-mended (15 mg/kg for amikacin). For patients with creatinine clearance < 60 mL/min, traditional dosing as described below is recommended. With once-daily dosing, serum concentrations need not be routinely checked until the second or third day of therapy, depending on the stability of renal function and the anticipated duration of therapy. It is unnecessary to check peak concentrations because they will be high. The goal is to administer drug so that concentrations of less than 1 mcg/mL are present between 18 and 24 hours after dosing. This provides a sufficient period of time for washout of drug to occur before the next dose is given. Appropriate trough levels can be accurately determined by measuring serum concentrations in samples obtained 2 hours and 12 hours after dosing and then adjusting the dose based on the actual clearance of drug or by measuring the concentration in a sample obtained 8 hours after a dose. If the 8-hour concentra-tion is between 1.5 mcg/mL and 6 mcg/mL, the target trough can be achieved at 18 hours.

With traditional dosing, adjustments must be made to prevent accumulation of drug and toxicity in patients with renal insuffi-ciency. Either the dose of drug is kept constant and the interval between doses is increased, or the interval is kept constant and the dose is reduced. Nomograms and formulas have been constructed relating serum creatinine levels to adjustments in treatment regi-mens. Because aminoglycoside clearance is directly proportional to the creatinine clearance, a method for determining the aminogly-coside dose is to estimate creatinine clearance using the Cockcroft-Gault formula described. For a traditional twice- or thrice-daily dosing regimen, peak serum concentrations should be determined from a blood sample obtained 30–60 minutes after a dose, and trough concentrations from a sample obtained just before the next dose. Doses of gentamicin and tobramycin should be adjusted to maintain peak levels between 5 and 10 mcg/mL and trough levels < 2 mcg/mL (< 1 mcg/mL is optimal).

All aminoglycosides are ototoxic and nephrotoxic. Ototoxicity and nephrotoxicity are more likely to be encountered when therapy is continued for more than 5 days, at higher doses, in the elderly, and in the setting of renal insufficiency. Concurrent use with loop diuretics (eg, furosemide, ethacrynic acid) or other nephrotoxic antimicrobial agents (eg, vancomycin or amphotericin) can poten-tiate nephrotoxicity and should be avoided if possible. Ototoxicity can manifest either as auditory damage, resulting in tinnitus and high-frequency hearing loss initially, or as vestibular damage, evi-dent by vertigo, ataxia, and loss of balance. Nephrotoxicity results in rising serum creatinine levels or reduced creatinine clearance, although the earliest indication often is an increase in trough serum aminoglycoside concentrations. Neomycin, kanamycin, and amikacin are the most ototoxic agents. Streptomycin and gentamicin are the most vestibulotoxic. Neomycin, tobramycin, and gentamicin are the most nephrotoxic.In very high doses, aminoglycosides can produce a curare-like effect with neuromuscular blockade that results in respira-tory paralysis. This paralysis is usually reversible by calcium gluconate (given promptly) or neostigmine. Hypersensitivity occurs infrequently.

Aminoglycosides are mostly used against gram-negative enteric bacteria, especially when the isolate may be drug-resistant and when there is suspicion of sepsis. They are almost always used in combination with a β-lactam antibiotic to extend coverage to include potential gram-positive pathogens and to take advantage of the synergism between these two classes of drugs. Penicillin-aminoglycoside combinations also are used to achieve bactericidal activity in treatment of enterococcal endocarditis and to shorten duration of therapy for viridans streptococcal and some patients with staphylococcal endocarditis. Which aminoglycoside and what dose should be used depend on the infection being treated and the susceptibility of the isolate.