South India under the Satavahanas

The Satavahanas emerged in the first century BCE in the Deccan region.

South India under the Satavahanas

The Satavahanas emerged in the first century BCE in the Deccan region. They ruled over parts of Andhra, Maharashtra, Karnataka and Madhya Pradesh. From recent archaeological evidence it is understood that the Satavahanas started to rule in the Telengana area and then moved to Maharashtra to rule in the Godavari basin with Prathistan (Paithan in Maharashtra) as their capital. Later they moved eastwards to control coastal Andhra also. The work of Pliny talks about 30 walled towns, a large army, cavalry and elephant force in the Andhra country. 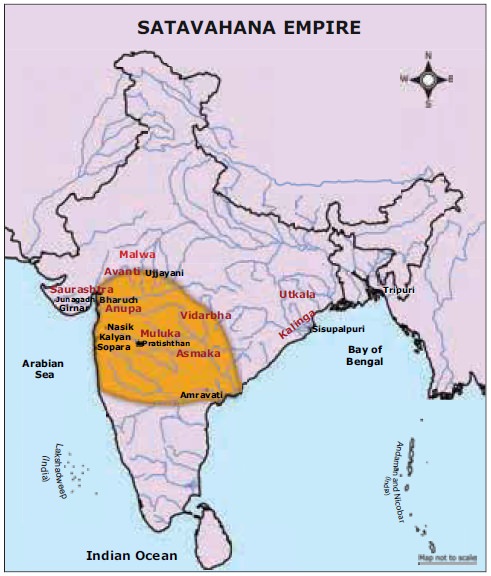 Gautamiputra Satakarni was the greatest of the Satavahana kings. He defeated the Shaka ruler Nahapana and reissued the coins of Nahapana with his own royal insignia. The inscription of his mother Gautami Balashri at Nashik mentions him as the conqueror of the Shakas, Pahlavas, and Yavanas. He is also said to have performed the prestigious Vedic asvamedha sacrifice.

Vasishthiputra Pulumavi, the successor of Gautamiputra Satakarni, expanded the frontiers of the Satavahana Empire. The coins issued by him are found scattered in many parts of south India. Yagnashri Satakarni was another famous ruler who issued coins with a ship motif, indicating the importance of the overseas trade during his reign. 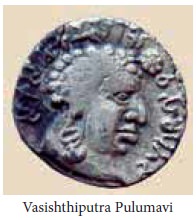 King Hala is credited with the writing of Gatha Sattasai, a collection of 700 love poems. Written in Maharshtri Prakrit dialect, it has themes similar to those found in the Tamil Sangam poetry.

The Satavahana Empire declined around the 3rd century CE and was replaced by the Ikshvakus, followed by the Pallavas, in Andhra and the Kadambas in northern Karnataka.

Offering land grants was an important development of the Satavahana times. The beneficiaries of these grants were mostly Buddhists and Brahmins. 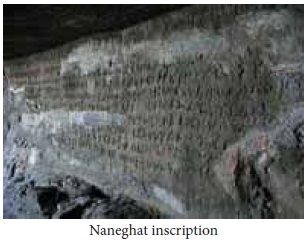 The Naneghat inscription refers to tax exemptions given to the lands granted to Buddhist monks. Thus we notice the beginning of priestly groups attaining higher status. These land donations created a group of people who did not cultivate, but owned land. This led to the development of land-based social hierarchy and divisions in the society.

For the first time a big state covering a major part of the Deccan was established. Several rock-cut caves dedicated to the Buddha sangha bear evidence that they were situated in the trade routes linking the interior to the coastal parts of Konkan region. It was also a period of brisk Indo-Roman trade.