Ideology and Religion - Evolution of Society in South India

The earliest evidence of the appearance of formal religious activities appears in the time of the Asoka, when Buddhism reached south India and Sri Lanka.

The earliest evidence of the appearance of formal religious activities appears in the time of the Asoka, when Buddhism reached south India and Sri Lanka. Asoka’s daughter is considered to have taken the Bodhi tree to Sri Lanka. There is a legend associated with the movement of Chandragupta Maurya to Karnataka region before the time of Ashoka. The Satavahanas, Sangam kings and Ikshvahus supported Vedic sacrifices. The evidence for the movement of Brahmins and the performance of Vedic ritual practices is found in the Sangam texts. But the varnasrama ideology was yet to take root in the Tamil region.

Evidence of Buddhism is widely found in south India. The Krishna and Godavari delta of Andhra had many important Buddhist centres. Archaeological excavations conducted in Amaravathi, Nagarjunakonda, etc. show how deep-rooted was Buddhism. In Tamil Nadu, Kaviripattinam and Kanchipuram have evidence of Buddhist Stupas. But compared to Jainism, the evidence for Buddhism is restricted to a few sites in Tamil Nadu. The numerous cave shelters with Tamil Brahmi inscriptions found in Tamil Nadu show that Jainism was more influential in the Tamil country. Their influence on the common people is not known but we have evidence for the merchants and lay devotees supporting Jain monks by providing rock shelters and offerings. In the post-Sangam centuries Jains contributed substantially to Tamil literature. 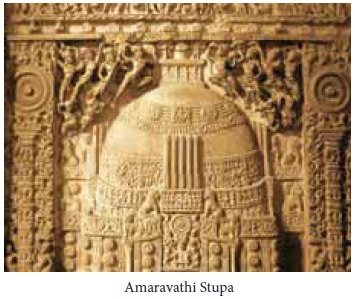 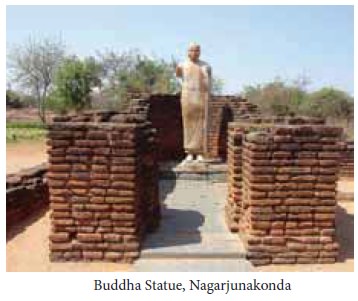