The first three centuries of the Common Era are widely accepted as the Sangam period, as the information for this period is mainly derived from the Sangam literature.

The first three centuries of the Common Era are widely accepted as the Sangam period, as the information for this period is mainly derived from the Sangam literature. More correctly this has to be called as the early historical period and starts one or two centuries earlier, from the second century BCE, as we have clear epigraphical and archaeological evidence, in addition to literary evidence.

Though the three Tamil ruling families were known to Asoka in the third century BCE itself, some individual names are known only from the Sangam poems of the first century and later. Known as muvendar, ‘the three crowned kings’, the Cheras, Cholas and Pandyas controlled major agrarian territories, trade routes and towns. But the Satiyaputra (same as Athiyaman) found in the Asokan inscription along with the above three houses is a Velir chief in the Sangam poems.

The Cholas controlled the central and northern parts of Tamil Nadu. Their core area of rule was the Kaveri delta, later known as Cholamandalam. Their capital was Uraiyur (near Thiruchirapalli town) and Puhar or Kaviripattinam was an alternative royal residence and chief port town. Tiger was their emblem. Kaviripattinam attracted merchants from various regions of the Indian Ocean. Pattinappalai, composed by the poet Katiyalur Uruttirankannanar, offers elaborate descriptions of the bustling trading activity here during the rule of Karikalan.

Karikalan, son of Ilanjetchenni, is portrayed as the greatest Chola of the Sangam age. Pattinappalai gives a vivid account of his reign. Karikalan’s foremost military achievement was the defeat of the Cheras and Pandyas, supported by as many as eleven Velir chieftains at Venni. He is credited with converting forest into habitable regions and developing agriculture by providing irrigation through the embankment of the Kaveri and building reservoirs. Kaviripattinam was a flourishing port during his time. 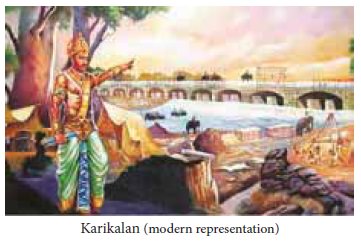 Another king, Perunarkilli is said to have performed the Vedic sacrifice Rajasuyam. Karikalan’s death was followed by a succession dispute between the Puhar and Uraiyur branches of the Chola royal family.

The Cheras controlled the central and northern parts of Kerala and the Kongu region of Tamil Nadu. Vanji was their capital and the ports of the west coast, Musiri and Tondi, were under their control. Vanji is identified with Karur, while some scholars identify it with Tiruvanchaikkalam in Kerala. Now it is accepted by most scholars that there were two main branches of the Chera family and the Poraiya branch ruled from Karur of present-day Tamil Nadu.

The Patitrupathu speaks of eight Chera kings, their territory and fame. The inscriptions of Pugalur near Karur mention Chera kings of three generations. Chellirumporai issued coins in his name. Imayavaramban Nedun-cheralathan and Chenguttuvan are some of the prominent Chera kings. Chenguttuvan defeated many chieftains and is said to have ensured the safety of the great port Musiri by putting down piracy. But the great north Indian expedition of Chenguttuvan mentioned in Silappathikaram is however not mentioned in the Sangam poems. He is said to have ruled for fifty-six years, patronising the orthodox and heterodox religions. Some Cheras issued copper and lead coins, with Tamil-Brahmi legends, imitating Roman coins. 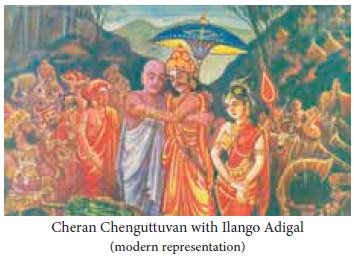 There are many other Chera coins with their bow and arrow emblem but without any writing on them.

The Pandyas ruled from Madurai. Korkai was their main port, located near the confluence of Thampraparani with the Bay of Bengal. It was famous for pearl fishery and chank diving. Korkai is referred to in the Periplus as Kolkoi. Fish was the emblem of the Pandyas. Their coins have elephant on one side and a stylised image of fish on the other. They invaded Southern Kerala and controlled the port of Nelkynda, near Kottayam. According to tradition, they patronized the Tamil Sangams and facilitated the compilation of the Sangam poems. The Sangam poems mention the names of several kings, but their succession and regnal years are not clear. 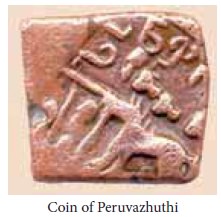 The Mangulam Tamil-Brahmi inscription mentions a Pandya king by name Nedunchezhiyan of the second century BCE. Maduraikanchi refers to Mudukudumi-Peruvazhuthi and another Nedunchezhiyan, victor of Talaiyalanganam, and a few other Pandya kings. Mudukudimi-Peruvazhuthi is referred to in the Velvikkudi copper plates of eighth century for donating land to Brahmans. He seems to have issued coins with the legend Peruvazhuthi, to commemorate his performance of many Vedic sacrifices. 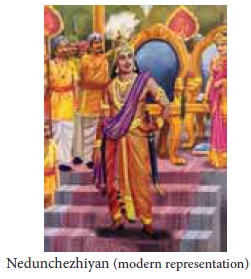 He is also given credit for capturing Milalai and Mutthuru (Pudukottai district) two important places from a Vel chief. He is praised as the lord of Korkai, and as the overlord of the southern Paratavar, a martial and fishing community of the Tirunelveli coast.