Let us examine what Society, State and Government mean and how are they interrelated.

Let us examine what Society, State and Government mean and how are they interrelated. 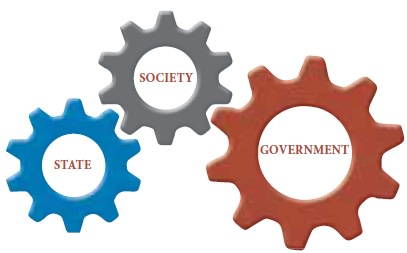 Society, State and Government – How are they interrelated?

Each one of us live simultaneously in family, society, and State. What does this mean? How society and State are interrelated? What is government to do with the State and the society?

Historically when humans evolved from hunters and gatherers to a settled community, they started to produce goods. Group of families constituted a community and a group of communities constituted what we call as a society. Individuals for their emotional need that is often reciprocal lived in the family.

Families came together under the umbrella of the community for a greater objective of security. The communities so formed made a higher level of organization called society solely to live in an organized manner where each ones’ need is met out by the collective output of the whole. Thus when an individual is labouring for earning his food there arose an inevitable situation that labour results in productivity. The produced goods thus required a market supplemented by the invention of another institution called trade. When goods are produced and marketed, it is clear that the situation could turn in favour of a few who are mighty. When society is governed by the rule of might, then ultimately that would cause the society to disintegrate and fall apart.

When society degenerates, it has a consequent effect on the communities and ultimately upon its constituent families and each and every individual would lead to suffering. Thus, it was, for this reason, humans came together, guided by reason felt the need of the State.

State came into existence out of an imminent need that in the absence of a centralized and a coercive authority human cannot be saved from each other. This control in modern States is done legally through a set of rules and regulations. In a democracy, these rules and regulations are framed by the legislature, enforced by the executive and the judiciary adjudicates the made laws and the implemented laws on the basis of their legality and judiciousness. The function of law making, implementing and interpreting is the function of government. You will read more about this as separation of powers.

Major Differences between State and society

The society consists of a large number of individuals, families, groups, and institutions. The early political thinkers considered both State and society as one. The state is a part of society but is not a form of society.

The membership of the State and society are the same. But they differ as regards to their purpose. The State exists for one great but single, purpose; society exists for a number of purposes; some great and some small. From the point of view of the organization, the State is a single organization – legal, whereas society comprises within itself many organizations. The State exercises its control over humans by coercion and exact obedience. On the other hand, the society employs a method of voluntary action. The purposes for which society exists makes the persuasive methods necessary. The multiplicity of the organization of society gives ample opportunity to the members to relinquish one association and join another in the event they are subject to any coercion. Thus you must understand a State without a centralized authority of coercive force and a society without the method of persuasion will fall apart.

Government is often used with the ‘State’ as a synonym. But both the government and the State are two different entities. There are differences between the State and the government. They are explained in the table given below.

Before examining the functions of Modern State, you must understand what is Modernity?

What is called as a Modern State?

Modernity in historical term means the period of questioning the tradition or rejecting the age-old set of beliefs, practices and socio-cultural norms. Modernity laid the foundations of the prioritization of individualism, freedom, equality, fostering of scientific temper in every walk of life and thus modernity led humans from agrarianism towards industrialization, urbanization, and secularization. This intellectual shift drastically influenced the understanding of the society, State and government. For instance, the efforts of Raja Ram Mohan Roy to reform the Indian society are directly linked with the influence of western modernity on Indian thinkers.

In Political science, modernity impacted on the concepts of State, liberty, equality, justice and so on. For instance, the meaning of patriots, revolution, rights, privileges, sovereignty was understood differently given their historical context. Similarly, the term State was understood differently during the time of the Greek City State. State means completely different when it is referred to a modern State as a form of political organization evolved in modern western Europe dating to medieval ages. The rational foundation of modern State is often argued to be the treaty of Westphalia signed in the year 1648.

The idea of modern State was exported throughout the world during the nineteenth century by the process of European Colonization. The South Asian States that became independent from colonial control after second world war can be brought under the umbrella of post-colonial States and can be compared with the post-colonial States of the other parts of the world to assess their relative merits and drawbacks for improving their governance systems.

List the contribution of modernity to science and technology. Occidentalism is the term associated with modernity. Have you come across the works of Avishai Margalit on Occidentalism?

Why Mahatma Gandhi criticized modernity in his work “Hind Swaraj’?

Is M. K. Gandhi against Modernity?

Do you agree with M. K. Gandhi’s view? Conduct a critical debate in the classroom.