Thus, from the above descriptions, you can easily conclude that State should have certain essential components.

Thus, from the above descriptions, you can easily conclude that State should have certain essential components. The state is a set of institutions which has an unquestionable authority over people. It is hence all modern States have their own Constitution that moderates the freedom and privileges of the citizens of the State with the coercive and unquestionable power of the State. Hence Constitution is considered as a limiting agent on the overwhelming authority of the State.

The Montevideo Convention on Rights and Duties of States held in 1933 gave the fundamental understanding of State. A State must have a permanent population, a defined territory and a government that can control the territory and its people and conducts international relations with other States. Consequently, the recognition of a State by other States becomes crucial for the legitimacy of the State from an external point of view. You would be reading more when you read about Sovereignty.

Let us attempt to understand what the essential elements of State are?

Think of India as a State and try to answer what makes India, our country to qualify for a State? Firstly, India has a well-defined territory. In India we the people, Indians live. We Indians have our Government. India is a State that has a status in the world and exists independently. India is not bound by the rules of any other State. It can enter into treaties with other States. We have our diplomats in all countries and their offices are called ‘Diplomatic Mission’. An Indian Embassy in the USA is generally known as ‘India in the USA’. In Puducherry, the Consulate General of France is called France in India.

v  The post-independence census in the country has been conducted once in ten years.

Under the constitutional provisions by notification under the census Act 1948.

v  In the last census, operations conducted in our country in 2011, the enumerators and supervisors has focused on the house listing and housing Census. The type of information gathered on the household, its head, amenities and assets. It also includes the total number of residents, use of the census house and material used for floor, wall and roof.

v Other details include the name of the head of the household, gender, community, ownership, number of dwelling rooms, number of married couples. The enumerators would also seek details on the amenities available in the household such as sources of drinking water outlet, latrine, waste water outlet, bathing facility, kitchens and fuel used for cooking.

v  They would record information, on the use of banking services and assets, such as radio, TV, computer, internet connection, telephone, bicycle, motorcycle and car. 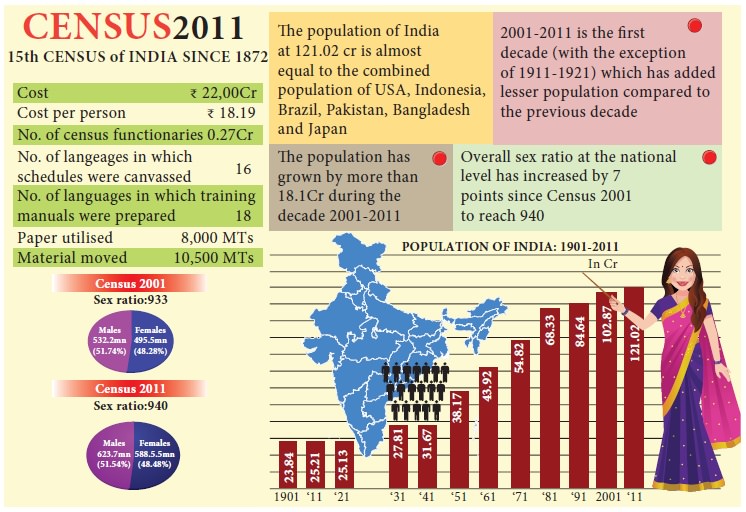 It is the people who make the State. The population is essential for the State. What should be the size of the population has been a debate by thinkers from ancient time. According to Plato, the ideal number would be 5040. According to Aristotle, the number should be neither too large nor too small. It should be large enough to be self – sufficient and small enough to be well governed. Rousseaudetermined 10,000 to be an ideal number for a State. Ancient thinkers view on the number was based on the small city – States like Athens and Sparta. The modern States vary in population. India has a population of 121.02 cr people according to 2011 census of India.

According to Plato, the ideal number of State is 5040. The reason is the number 5040 is divisible by numbers from 1 to 12. In the case of 11 the reminder is 2. During the time of emergency the population can be divided in various columns and instructions could be given.

Can State be without territory? Certainly not. People need territory to live and to organize themselves socially and politically. It may be remembered that the territory of the State includes land, water, and air space. The modern States differ in their sizes. The territory is necessary for citizenship. As in the case of population, no definite size with regard to extent of the area of the State can be fixed. There are small and big States. In the words of Prof. Elliott, “Territorial sovereignty or the superiority of State, overall within its boundaries and complete freedom from external control has been a fundamental principle of the modern State life”.

India has an area of 32,87,263 sq. km. approximately India occupies 2.4% of the global area. The opening article of the Indian Constitution speaks about the Territory of India.

Look at the newspaper advertisement given by the Government of India. Answer the following questions:

v   What do you understand by the word ‘State’?

v   List five ways in which you think that the government affects your daily life.

v   Why do you think the State needs to make rules for everyone in the form of laws?

Government is the working agency of the State. It is the political organization of the State. Indian political scientist Prof. A. Appadurai defined government as the agency through which, the will of the State is formulated, expressed and realized. According toC.F. Strong, in order to make and enforce laws, the State must have a supreme authority. Government is a fixed structure. Political executives who get elected to offices may change but Government as a system is a permanent body of State. The State existed before the people come to power and it  will exist after these men and women in power leaves the control of the State.

The fourth essential element of the State is sovereignty. The word ‘sovereignty” means supreme and final legal authority above. No legal power can exist beyond sovereignty. The concept of “sovereignty” was developed in conjunction with the rise of the modern State. The term Sovereignty is derived from the Latin word “superanus” which means “supreme”. In a traditional understanding, the characteristics of sovereignty are absoluteness, permanence, universality, indivisibility, exclusiveness, and inalienability.

There is a restriction of movement of individuals from one State to another State in the name of territorial sovereignty. But sitting in one country you can communicate to a person to another country using the internet. How do you see this to do with the sovereignty of the States? Examine why social networking websites like Facebook, twitter and YouTube are banned in some countries.

The father of the modern theory of sovereignty was Jean Bodin (1530 – 1597) a French political thinker. According to Harold J. Laski , “It is by possession of sovereignty that the State is distinguished from all other forms of human association”. Human Association would mean anything from family, society and even voluntary organization similar kinds through which humans identify themselves together.