The modern State is a developed State.

The modern State is a developed State. The State should strive to keep its people secure and safe. The State should ensure that its borders are sealed and protected. The market needs to be integrated into the society by a well-knit macroeconomic structure. ‘Citizen first’ should be the motto of all the activities of the State. The sole principle of governance of modern State is whether the action of the State leads to the promotion of the welfare of its people. Accordingly, the State engages itself as a provider of essential services.

It is largely accepted that the modern State focuses on three main functions. 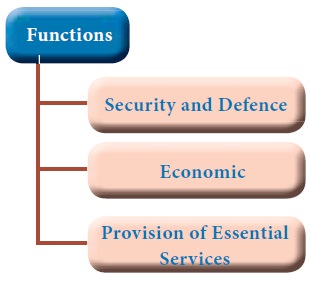 The States of today’s world consider the meaning of security from multiple standpoints. Terms like Human Security have emerged to put citizens first. Inspired by the philosopher Immanuel Kant’s idea of perpetual peace, the States of the world came together as ‘league of nations’ and later as the ‘United Nations Organisation and have been debating the terms security and defence in terms of promoting peace.

The modern state is supposed to intervene in the economic functions of the political system. The State needs to support the people, make them realize their potential for their betterment. Try understanding what Martha Nusbaum explain about ‘capabilities’ and what does Nobel Laureate Amartya Sen’s ideas on ‘capability approach’. Protecting consumers, weaker sections, investing in areas where there is no profit are those included in the economic functions of the modern state.

From ‘cradle to grave’ modern state is supposed to care for its citizens. The fundamental needs such as food, clean drinking water, providing education, healthcare, and social security for the population are the responsibilities of the modern state. You can find the number of schemes and projects of Government of India and the various state governments to be in this direction. The noon meal scheme and the nutrition’s meal schemes in all Government schools initiated by the Government of Tamil Nadu and adopted in different parts of the country is one such example.

The modern State strived for the welfare of its people and hence another concept came into existence called ‘Welfare State’.