Socialism is an ideology that supports public ownership of property and natural resources.

Many thinkers in the 19th century had questioned the negative consequences of liberalism. They strove to protect the interests of the working class. Robert Owen was an industrialist and a philanthropist. He started the cooperative movement and experimental socialist communities in England to realise betterment in the conditions of the workers. He associated the workers in the management of his industries and showed that profits can be increased by the joint endeavour between workers and employers. He appealed to the reason of the fellow capitalists to take into account the welfare of the working classes.Saint Simon, a French industrialist and thinker, argued that the welfare of the working class must also be taken into consideration for realising an efficient economy and effective society. 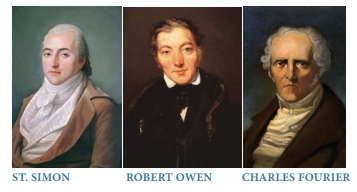 Charles Fourier, another French thinker, suggested the socialist reconstruction of the society by forming association of producers termed as phalanges. Both Saint Simon and Charles Fourier appealed to the conscience of the capitalists to improve the miserable state of the workers. These three notable theorists advocated ideas in favour of the workers in 19th century. Karl Marx described their thoughts as Utopian Socialism as they provided only a superficial understanding of capitalism and their alternative schemes are wishful and utopian in nature. He claimed that, in contrast his communism is based on scientific understanding of capitalism meriting the name of Scientific Socialism.

Democratic Socialism as the nomenclature indicates combines the two systems of socialism and democracy to provide a unique political and economic system to promote equality and freedom. It differs from Marxism in its conception of the State. It believes that the State is not an instrument of exploitation of workers by the capitalists. Rather, the State is an instrument of social welfare. The State must be made democratic. All classes in society own the State. Socialism can be established only through the State. It will not and should not wither away as Marxism predicted.

Democratic Socialism argues that socialism can be established through evolutionary and peaceful means. It’s methodology of change characterized as gradualism or ballot box socialism. It dismisses revolutionary, violent struggle as unnecessary. Democratic Socialism argues for harmonious relationship among classes and class differences must be solved through peaceful methods. The right to property need not be abolished. Rather for the sake of social welfare the right to property must be limited.

Fabian Socialism was the British version of socialism propagated by the Fabian Society from 1884. They chose the nomenclature Fabianism inspired by the great Roman General Fabius who was historically famous for adopting the military strategy of ‘wait and hit hard at the right moment’. Sidney Webb and Sidney Oliver H G Wells brought out the ideology of Fabianism. English playwright George Bernard Shaw was one of the greatest proponents of Fabianism. 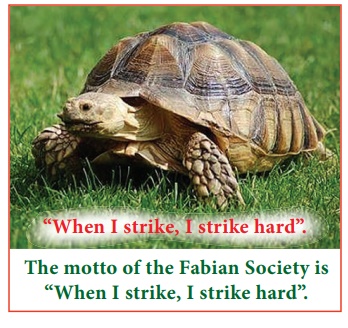 As an ideology Fabianism attacked capitalism as an exploitative system and advocated a thorough reorganization of economy and politics of their contemporary period. It expressed its resolute support for democratic State. There are two important attributes of the Fabian State. Firstly, it should be based on decentralization of power. Secondly, it should be led by experts. Fabianism rejected Marxist call for the abolition of the State. It wanted the State to exist on the foundations of decentralized power and expert leadership to promote social welfare.

Fabianism believed that socialism and democracy are complementary and supplementary to each other. They are to be appreciated as noble ideals of equality and justice are dearer to them. The Fabians did not advocate the abolition of private property. On the contrary, they supported existence of limited right to property governed by the principle of social welfare.

It is a kind of evolutionary socialism that emerged in Great Briton in the first two decades of the 20th century. The English political thinker and the founder of National Guilds League in England, D H Cole was the leading advocate of this brand of socialism. He wrote the book ‘Guild Socialism: A Plan for Economic Recovery’ to propagate the tenets of Guild Socialism. Guild Socialism criticized the exploitation of workers by the capitalists in the western world and arose as a protest ideology against capitalism

The word guild refers to the association of craftsmen and artisans of a particular profession in the medieval period in Europe. It acted as a source of mutual support, as a medium to pass on the professional knowledge to new entrants. Guild Socialism combines the medieval guild with modern socialism and envisages a political organization in which organized workers-based associations will discharge most of the political functions. This ideology believes that in any society there are numerous professions, trades and occupations and a member of one profession cannot represent the interests and welfare of members of another profession and therefore every profession must have its own organization. All such organizations must come together to form a governing council at the district, State and national-levels to administer the system. A national-level confederation of guilds will govern the country.

Guild Socialism does not call for the destruction of the State. It endows the State with certain common functions like providing education and health services to the people. Guild Socialism supported the principle of gradualism to bring about changes in the existing capitalist system.

It abhorred the revolutionary methods of struggle associated with Marxism. All changes in society should be brought through peaceful and democratic means. This was a cardinal principle of Guild Socialism.

Though Guild Socialism was laudable in its commitment to the welfare of workers it was criticized as an impractical alternative. Its attempt to reduce the State to the position of an ordinary guild was not accepted by many political theorists who asserted that the weakened state of Guild Socialism cannot maintain law and order and protect its people from invasions and insurrections.

Differences between Communism and Socialism 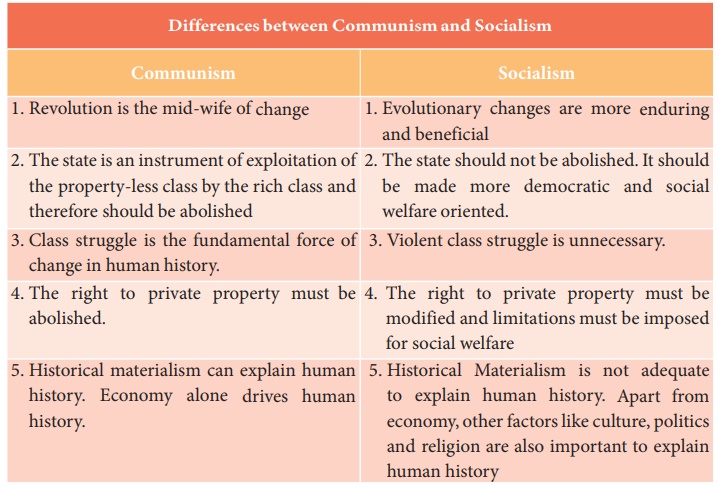 The Indian kind of socialism is known as Socialistic Pattern of Society that was adopted by the Indian State in the mid 1950s. Provision of all basic necessities to all people irrespective of caste, creed, religion, race and gender and elimination of poverty, inequality and illiteracy are the objectives of Indian Socialism. Parliament passed a resolution for the establishment of Planning Commission In 1950. The strategy of Five Year Plan was implemented to promote development with socialist content from 1951. We adopted a Mixed Economy where both private and public sectors were allowed to operate. We provided the commanding heights of the economy to the public sector to achieve development and equality.

The 42nd Constitutional Amendment Law introduced socialism as an official feature of the Preamble of our Constitution. The 44th Constitutional Amendment Act removed the Right to Property from the list of Fundamental Rights and made it an ordinary right in Part XII of the Constitution. The Directive Principles of State Policy in Part IV of the Constitution contains many provisions that are designed to promote socialistic objectives like Right to Work and avoidance of concentration of wealth in the hands of a few people. India had adhered to socialism from the year of independence to 1991 when we launched our New Economic Reforms that favored liberalization, privatization and globalization.