Liberalism is the most important ideology of modern political theory.

Liberalism is the most important ideology of modern political theory. It emerged in the 17th century and continues to be the most widely followed Idealogy in the contemporary world. The etymology of the word liberalism is from ‘Liber’ that means liberty. The supporters of the Spanish Constitution in the 19th century made the word popular by calling themselves as liberals. Now western countries like United States of America, the United Kingdom, Canada, and Germany adhere to the tenets of liberalism in politics and economy.

Liberalism chronologically had experienced three major phases. In the first phase till 1930 it was called as Negative Liberalism. The second phase termed as Positive Liberalism emerged after the Great Economic Depression and lasted up to the 1970s. The third phase, known as Libertarianism, is followed by major countries of the world for the last four decades. 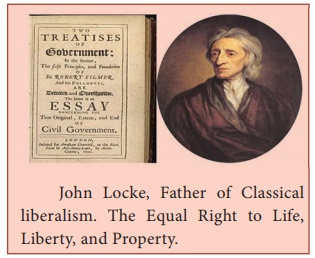 Negative Liberalism considers man as a rational, capable and master less individual. All human beings are equal and free. Everyone knows their interests and is endowed with the capacity to satisfy their interests. Society is a mere aggregate of freely existing individuals. There is no necessity for State and society to interfere or regulate the life of individuals.

The State is a necessary evil. It is necessary for the protection of law and order without which individuals cannot realise their interests. Nevertheless, the State is an evil as even its mere existence itself endangers the rights and liberties of the individuals.

The State is a negative State as it is prohibited from carrying out developmental activities. The State is called as Laissez Faire State. Laissez Faire has its origin in the French language meaning Leave Alone. The State must leave the individuals alone to pursue their activities. Maintenance of law and order and enforcement of legally made contracts are the only functions assigned to the State by Negative Liberalism. 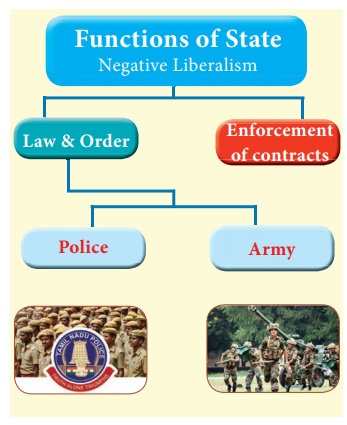 Economically, Negative Liberalism supports free market economy based on demand and supply. It prohibits the State from interfering with the economic activities. The State is akin to a cricket umpire in its powers and functions. The umpire does not play the game but watches whether the players are playing the game in accordance with the laws of the game. Similarly the State should not interfere in the economy as market alone determines its activities.

Negative Liberalism believes in the concept of natural rights. When Mother Nature created man, it endowed him with basic rights that are called Natural Rights. The State should not erode or undermine these natural rights. The Rights to Life, Liberty and Property are indispensable for human existence and development. Therefore, the State should never abolish or erode them. The Right to Property is special to the proponents of Negative Liberalism. It is an unlimited right as all individuals can acquire, enjoy and dispose of property without interference from the State.

Negative liberalism metamorphosed into Positive liberalism in the 20th century. Even though Negative Liberalism contributed to the generation of unprecedented wealth in the western countries it had also inflicted enormous pain on common people. Glaring inequalities among people, appearance of slums in the cities and exploitation of the workers exposed the deficiencies of Negative Liberalism. Humanist thinkers like Ruskin protested against the misery of the people.

Positive Liberalism brought out the new concept of Social Welfare State. This concept projects the State as a positive instrument for the promotion of social welfare. The role of the State is to provide social service to the people. It should construct and maintain hospitals, educational institutions, factories and industries, infrastructural facilities like roads, railway tracks and ports. The State also came to be known as Social Democratic State, a nomenclature that explains the significance of democracy in the constitution of a positive State.

The rights of the people can be modified so that the welfare of society can be promoted. Positive liberalism supports a close relationship between rights and duties and argues for Social Welfare theory of Rights. Similarly, freedom is positive in content. While Negative Liberalism expounded freedom from the State, Positive Liberalism recommends freedom through the State. Freedom does not mean being free from the interference of the State but adhering to the social welfare activities of the State. Freedom through the State and not from the State is their theme.

The economy must be regulated by the State so that alternate, painful appearance of economic boom and depression can be averted. Progressive taxation can be adopted by the State to generate resources required for its social welfare activities. Similarly, the State has power and authority to adhere to economic strategies like bank nationalisation, minimum wages and reservation of industries as public sector to bring in the uplift of all sections of society.

Positive Liberalism was followed in the western democracies for many decades from 1930s. But gradually philosophers and political leaders began to question the utility of a Social Welfare State propagated by Positive Liberalism. They argued that State interference in society and economy had precipitated a plethora of problems like industrial sickness, economic inefficiency, lessened productivity, corruption, erosion of liberties of people and economic stagnation, therefore should be curtailed.

The third phase in the history of liberalism is called as contemporary Liberalism or Libertarianism. It emerged in the western world after the end of positive liberalism and gradually spread to most parts of the political universe. The President of the United States Ronald Reagan implemented libertarian ideology in his country from 1981 to 1989.

The first woman Prime Minister of the United Kingdom Margaret Thatcher was the political architect of libertarianism. The last president of Soviet Union Michel Gorbachev introduced the two path-breaking reforms of Perestroika (Restructuring) and Glasnost (openness) that pushed the Soviet Union into the direction of libertarianism.

A number of political scientists have advocated libertarianism. F.A.Hayek, M.Oakeshott, Karl Popper, Milton Friedman, Nozick and Nock are important among the supporters of libertarianism. 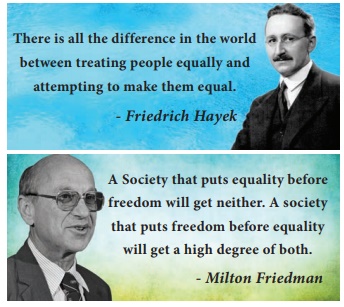 Libertarianism is a re-invention and re-application of Classical Liberalism in the second half of the 20th century and in the first half of the 21st century. It believes in the worth and importance of individuals. It advocates individual freedom as indispensable for the life of man. It staunchly supports the concept of ‘Personal Autonomy’ whereby every human being is provided with complete freedom of choice to make decisions in their life as they want. It restricts the domain of the State to maintenance of law and order. Nozick famously coined the slogan ‘Minimal State is Inspiring as Well as Right’. He criticised any more functions of the State as unjustified and unwarranted. Another proponent of Libertarianism, Oakeshort commented that the government merely pursues peace.

The libertarians argue that the increase in the functions of the State in the name of development and social welfare leads inevitably to emergence of collectivism and resultant concentration of power in the hands of the State leading to the destruction of personal liberties of man.

They argue that the political and economic search of humankind had reached its final destination with the emergence of Liberal Democratic State or Social Welfare State. The ideal system of human life should be planted and rooted in the soil of welfare State, decentralised power, mixed economy and competitive party system. The western nations have attained these ideal socio-political characteristics. They called for an end to the Liberalism versus Marxism debate and accepted that democracy is not merely a system of government but the good society in operation. They praised democracy as the ideal means of conflict resolution and governance.

The American political thinker Francis Fukuyoma wrote the book ‘The End of History and the Last Man’ in 1992. He argued that history has ended with the end of the Cold War and the victory of liberalism over communism. The history of mankind essentially composed of its ceaseless search for the ideal political, social and economic system. The victory of Liberalism signifies the end of that human search for right ideology and the advent of post- ideological world. The Liberal State and the Libertarian economy represent the culmination of the social economic and political evolution of humanity, therefore human history has ended was the argument of Fukuyoma.

But many political scientists and ideologies disagree with this. The post-modernist thinker Derrida argued that liberal democracy is not the ideal political system that solves the problems of man. He said, “Never have violence, inequality, exclusion, famine, and thus economic oppression affected as many human beings in the history of the earth and of humanity as it happened in the times of liberal democracy."

The American political scientist Samuel Huntington propounded ‘The Clash of Civilization’ theory as a counter to Fukuyoma’s End of History thesis. Huntington argued that end of the Cold War has not resulted in the universal and permanent success of liberal democracy. On the contrary, a new ideological rivalry has emerged between the two major civilizations of the world, Western Civilization and Islam that will dominate the politics of humankind in the 20th. He contended that other civilizations of the world will be sucked into the civilization clash between Western Civilization and Islam, and therefore history has not ended in the post-Cold War period, rather it has entered a new phase of confrontation.

New Economic Reforms were introduced in India in 1991 heralding the era of Liberalization, privatization and globalization. They reflect the ideology of Libertarianism. The State has withdrawn itself from many economic and social activities. ‘Minimum Government and Maximum Governance’ is the guiding principle of the State. The State has consciously shrunk its sphere of activities encouraging private initiative through measures like disinvestment. Under the impact of libertarianism the planning process was initially changed to the strategy of Indicative Planning and recently the planning Commission itself was replaced by a body called National Commission for Transforming India (NITI Ayog).