Adolf Hitler was the architect of the totalitarian ideology of Nazism that ruled Germany in the inter-war period.

Adolf Hitler was the architect of the totalitarian ideology of Nazism that ruled Germany in the inter-war period. Hitler formed the Nazi Party (officially National Socialist German Workers’ Party) on the basis of a radical 25-point programme in 1920 that included nationalization of all major industries, forfeiture of war profits and freedom from the thralldom of money-lenders. Hitler was a wily demagogue and attracted all sections of German society by promising everything to everybody. He promised ‘food to every belly, cloth to everybody, work to every hand and house to every family’. He arrived at the citadels of power without shedding blood by manipulating the parliamentary and constitutional processes in 1933.

The major cause of emergence of Hitler and Nazism can be located in the controversial Versailles Treaty of 1919 that was signed in Paris in the post-war settlement process. Hitler resorted to heighten the emotions of the ordinary German people by condemning the economic, military, and political humiliation of the German nation by the victorious allied powers. He authored the book ‘Mein Kempf ’ meaning ‘My Struggle’ containing his views and ideas about German nation.

Nazism believed in totalitarianism. It adhered to the historical slogan of the German philosopher Friedrich Hegel that ‘the State is the march of God on earth’. Complete obedience was demanded from the citizens.

Nazism resorted to systematic glorification of war. Hitler said, ‘War is eternal, war is universal. War is life. War is the origin of all things’. This war-mongering precipitated the Second World War and inflicted misery on mankind.

Perhaps the one of the most controversial principles of Nazism is its racial superiority and purity myth. Hitler considered the Aryan race as the most intelligent and superlative one calling it the master race of mankind. He detested other races living among or in the vicinity of German nation especially Jews and Slav races. A set of laws known as Nuremberg Laws were enacted in 1934 to preserve the racial purity of the Aryan race. Marital relations between Aryans and other impure races like Jews, gypsies were banned. 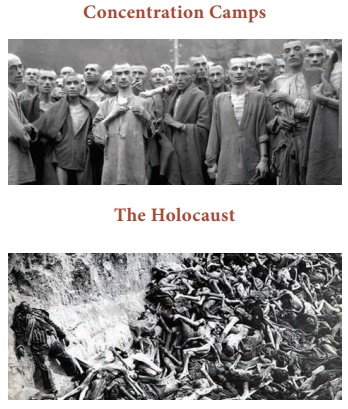 Nazisim implemented a brutal campaign of persecution against the Jews that resulted in the killing of millions of people which is now observed as the Holocaust. Nazism suppressed Jews holding them responsible for the misery of German people. The disproportionately higher representation of Jews in the wealthy classes and their lower percentage presence in lower sections of society invited the wrath of the Nazi State. They were subjected to inhuman conditions in places of detention known as concentration camps.

Nazism was expansionist. Germany wanted to capture colonies so that the surplus population can be exported and it could overtake England as the colonial giant of the world.

Nazism rejected the prevailing political ideologies and systems like communism of Soviet Union, liberal democracy of the United States of America and internationalism of League of Nations.

Nazism believed in hero worship. The idea that ‘Germany is Hitler and Hitler is Germany’ was instilled in the minds of the people. The concept of equality of human beings was rejected and Adolf Hitler was addressed as the "Fuehrer" (leader). In fact, Germany itself was called as "Fuehrer-State" meaning the ‘Leader-State’.

Nazism followed irrationalism and was vehemently against reason. Adhering to the philosophy of irrationalism it appealed to the emotions, sentiments and passions of the German people.

Nazism recognized only single party rule. All other political parties were banned and suppressed. The party resorted to mobilization of the people. Organizationally, it was based on strict hierarchy principles with Hitler concentrating all power at the top.

Succinctly to state, Nazism is criticized for being totalitarian, irrational, racist and inhuman ideology. The defeat of Germany in the Second World War and the suicide of Adolf Hitler extinguished the Nazi party and ideology. The emergence of the liberal democratic political system in Germany based on competitive party system has denied scope for the revival of Nazism.