Recent multidisciplinary trends in theory and research on in-terpersonal phenomena have converged in scientific efforts to elucidate relationship dynamics, including their antecedents and consequences.

Recent multidisciplinary trends in theory and research on in-terpersonal phenomena have converged in scientific efforts to elucidate relationship dynamics, including their antecedents and consequences (Reis et al., 2000). Underlying these efforts is the assumption that, since human behavior takes place within a relational context, a comprehensive scientific understanding of human behavior requires careful study of interpersonal relation-ships (Reis et al., 2000). Although there have been differences of opinion regarding how to define the term relationship, there is loose agreement that a relationship involves an interaction be-tween relational partners that affects the subsequent behavior of each partner in the interaction (Berscheid and Reis, 1998).

The study of interpersonal relationships spans a multitude of behavioral domains relevant to social psychology. Although recognition of the limits of the traditional individualistic focus of social psychological theory and research recently has prompted calls for a more systemic conceptual approach to research on in-terpersonal relationships, the vast majority of work to date has examined relationships between individual variables and rela-tionship experiences (Reis et al., 2000). It is important to empha-size that the nature and qualities of human social interaction are not attributable solely to evolutionary and biological influences and processes and are not directly parallel to animal behavior (Hinde, 1987). Further, while an evolutionary perspective can provide useful insights, adoption of such a viewpoint does not imply strict genetic determinism or unmodifiability of evolved behavioral patterns (Buss and Kenrick, 1998).

Bowlby (1982) regarded attachment between infants and caregiv-ers as an innate relational pattern that evolved in order to ensure the survival of the infant. Attachment phenomena are common in birds and mammals, with extended dependency periods in which offspring are fed, cleaned, sheltered and protected by the parent. In many species, attachment is enhanced by imprinting (Lorenz, 1970), a learned attachment that forms at the earliest phases of development. Imprinting is most likely to occur dur-ing specific, critical periods of development. If imprinting is not achieved during those times, it is difficult to attain. Attachment facilitates survival of the offspring, and investment in parental care for offspring is theorized to involve a cost–benefit trade off; the increased likelihood that offspring will survive is weighed against potential costs of parental care.

Attachment theory has as its cornerstone a system of recip-rocal interactions that facilitate psychological safety and security (i.e., attachment behavioral system) (Bowlby, 1973, 1980, 1982). According to Bowlby’s theory of attachment, as a consequence of evolutionary processes, children possess emotional and behavio-ral systems that organize and direct them to seek proximity and to bond with their primary caretakers when they feel distressed or threatened. The nature and quality of parental response in such instances influences the child’s development. Children’s internal working models of the attachment figure and the self in relation to this figure (i.e., self- and object-representations and schemas of interaction patterns between self and attachment figures) influ-ence their attachment style and the quality of their interpersonal relationships (Bretherton and Munholland, 1999).

The bulk of attachment research has been conducted with young children and their primary caretakers. This research reveals four attachment bonds types (i.e., secure, avoidant, anxious/ambivalent, disorganized/disoriented) most noted when 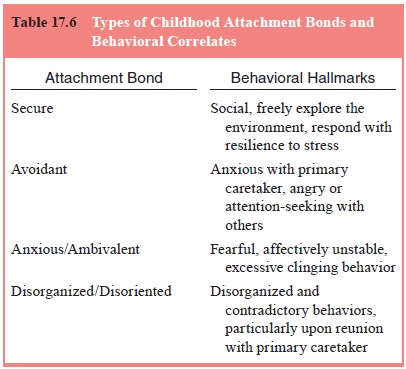 Securely attached children are social, able to explore their environment freely, and resilient when faced with stressful situa-tions. In contrast, avoidant children tend to be anxious with their primary caretaker(s) and angry or attention-seeking with others. Anxious/ambivalent children typically are fearful of the envi-ronment, affectively unstable, and cling inordinately to others. Finally, disorganized/disoriented children often exhibit signs of disorganization and contradictory behaviors, particularly upon reunion with their primary caretaker. Longitudinal research shows that attachment behavior patterns are stable over time, predictive of school behavior and peer interactions, and consist-ent with the quality of parenting received and parental attach-ment style (Bowlby, 1988; Sroufe, 2002; Sroufe et al., 1990).

Recently, clinicians and researchers have begun to turn their attention to attachment patterns in adults (Sperling and Berman, 1994; West and Sheldon-Keller, 1994). Similar to infant attachment patterns, adult attachment is presumed to be rooted in evolutionarily significant biological adaptation processes (Hazan and Diamond, 2000) and is characterized by a strong interest in the other, a desire to remain physically close to and spend time with the other, reliance on ongoing access to the other, dependence upon the other for support in the face of physical or emotional threats, and feelings of discomfort and distress upon separation (Feeney, 1999; Shaver and Hazan, 1993; West and Sheldon-Keller, 1994). However, unlike attachment patterns in children, the primary adult attachment objects typically are peers, adult patterns of relating are more reciprocal, and attachment figures often also are sexual partners (Feeney et al., 2000). Adult attachment is influenced significantly by working models of the attachment object and self that have their origins in childhood attachment experiences with primary caretakers (Bartholomew and Horowitz, 1991). Work in adult attachment theory addresses the establishment and maintenance of primary emotional partnerships in adult life, the effects of early and current attachment experiences on the development of psychopathology, and the use of attachment theory to guide therapeutic interventions. 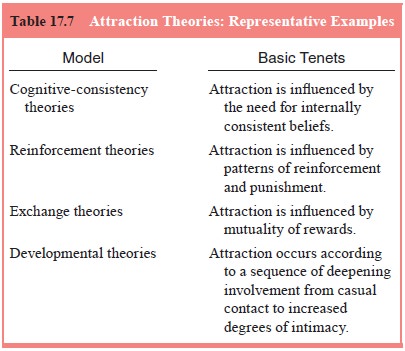 Sexual behavior is an important channel of expression in certain types of interpersonal relationships (e.g., romantic relationships) and its patterns of expression may symbolize underlying relational dynamics (Mason, 1991). While some social psychological perspectives have explored sexuality as it relates to romantic love, much of the extant theory and research related to sexuality has focused on mate selection (Berscheid and Reis, 1998). Evolutionary psychology, in particular, has exam-ined mate selection in detail (Buss and Kenrick, 1998).

In humans, sexual behavior serves more than the purely biological functions of procreation and physiological release, as it is also an important means of expressing love, closeness and the need for human contact. Sexual behavior is manifested in diverse ways determined by a complex interplay among one’s relationships, life situations and the broad sociocultural context. Although normative sexual behavior has received systematic em-pirical study, beginning with the survey research of Kinsey and colleagues (1948, 1953) and continuing to the present day (Janus and Janus, 1994), much of the emphasis of psychological research has been on sexual dysfunction and its treatment (Kaplan, 1974; Masters and Johnson, 1970).

Considerable evidence has accrued that social integration in general, and social support in particular, are related both to en-hanced health and lowered risk of mortality (Berscheid and Reis, 1998; Stroebe and Stroebe, 1996). Both main effect models and stress-buffering models have been employed to explain observed relationships between social support and health factors (Stroebe and Stroebe, 1996). Main effect models assume that a specific factor, such as social influence, may directly affect health and well-being via its impact on health beliefs, attitudes and behav-ior. By contrast, stress-buffering models presume that social sup-port confers health benefits only to the extent that an individual is experiencing stress. According to this perspective, social support may provide health benefits indirectly by serving as a resource to help the individual cope with health-related stress.

Several factors influence the likelihood of social-support provision. Among these are social-exchange processes and so-cial norms surrounding provision of help for individuals in ill-health, as well as causal attributions made about the recipient of social support (Stroebe and Stroebe, 1996). For example, social psychological research suggests that a curvilinear relationship exists between degree of distress and likelihood of an individual receiving social support, with moderate distress eliciting the greatest degree of supportive actions by others. Further, indi-viduals perceived by others as responsible for their plight may be less likely to receive social support than those whose ill-health is perceived by others as caused by uncontrollable circumstances. Additionally, social support may be withheld if individuals are perceived as not trying hard enough to manage their illness or are not showing sufficient improvement in response to social support provision. These patterns may have unfortunate implications for individuals with disease syndromes that cause high stress levels, are highly stigmatized, and/or are chronic or progressive, as they may find themselves socially isolated at times of high need for social contact.

As has already been mentioned, there is a vast scientific literature in support of the idea that relationships contribute both to physical and mental well-being (Berscheid and Reis, 1998; Reis et al., 2000; Stroebe and Stroebe, 1996). This em-pirical base complements the widespread clinical regard for the treatment relationship as a primary tool of influence and thera-peutic change (Mitchell, 2000). As such, social psychological theory and research on relationships can contribute substan-tively to current thinking about how to structure the clini-cian–patient relationship to maximize mental health treatment benefit (Derlega et al., 1991).