An individual’s social world is comprised largely of group affili-ations .

An individual’s social world is comprised largely of group affili-ations (Levine and Moreland, 1998). A group is a social unit in which members interact and are interdependent, such that there is mutual influence among the members. Groups vary across such dimensions as size, duration, purpose, tasks, goals, and patterns and rules of communication. Involvement in familial, work, social and/or activity groups provides several potential benefits, includ-ing the satisfaction of survival, psychological, informational and identity needs. In some instances, however, the group dynamics and organization may compromise or hinder the gratification of these needs. As such, groups can both positively and adversely influence psychological adjustment (Forsyth and Elliott, 1999; Levine and Moreland, 1992).

Research on groups has revealed specific structural di-mensions (Levine and Moreland, 1998). One such dimension is the status system, which reflects the power status of each group member relative to the other members. Additionally, groups are characterized by group norms, consisting of rules and expecta-tions for behavior and interaction in the group. Individual group members typically adopt specific roles in the group vis-à-vis other group members and the group as a whole. Further, groups vary in their degree of cohesion, which refers to the extent to which group members experience a sense of connectedness to the group. Each of these structural dimensions affect the group cul-ture, which can be broadly conceptualized as the group’s shared knowledge systems and customs. 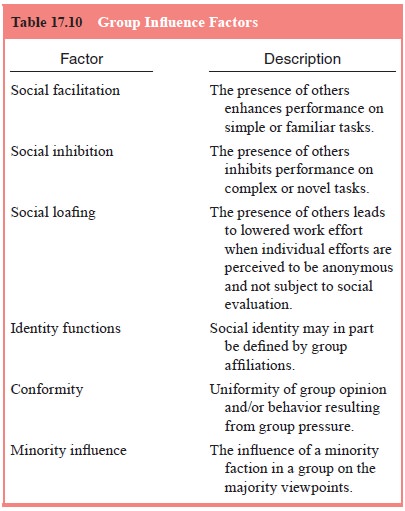 An important function of many groups is that of decision-making (Levine and Moreland, 1998). It has been suggested that groups often are more effective than individuals in making decisions or solving problems, particularly when the collective and cooperative efforts of the individuals in the group are needed to accomplish the various components of the task at hand. In general, however, research suggests that the nature of a given task makes a differ-ence in whether a group shows greater decision-making effective-ness than an individual. Successful group performance is aided 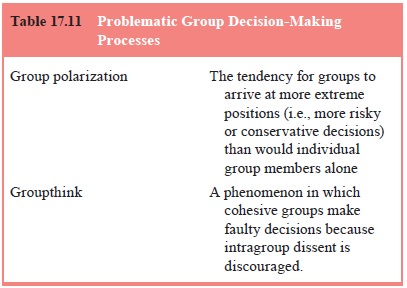 by a cooperative, rather than competitive, group atmosphere in which members work together to attain goals that benefit the group as a whole. Group conflict may arise when there is disagreement about decisions, tasks, roles and objectives of a group, prompting the emergence of specific group processes to address group differ-ences (e.g., negotiation, coalition formation) (Levine and Moreland, 1998). Groups are susceptible to specific social processes that may exert a potentially deleterious influence on the process of making thoughtful and productive decisions (Table 17.11).

The family is one of the most powerful and important group structures in our society (for a review of family theory, see Kaslow et al., 1999), and there are many similarities between the functioning of familial and nonfamilial groups (McGrath, 1984). Further, one’s roles and functions in social groups are influenced by one’s roles and functions in one’s family of origin (i.e., par-ents, grandparents, extended family, siblings) and family of crea-tion (i.e., partner, children, grandchildren).

General systems theory (von Bertalanffy, 1968), which provides the theoretical underpinnings of family systems theory, is also applicable to nonfamilial groups. According to systems theory, a system is a group of interacting elements. Family sys-tems attempt to find a balance between change and homeostasis to facilitate adaptation of the family and its individual members across the life-cycle. Family systems exchange information via feedback loops, circular response patterns in which there is a re-turn flow of information within the system. Interactions reflect circular causality, in which single events are viewed as both cause and effect. Families may be characterized in terms of their structure (i.e., organization) and function. The key structural property is wholeness (i.e., the whole is greater than the sum of its parts). Family units consist of interdependent subsystems that carry out distinctive functions to maintain themselves and sus-tain the system as a whole. Boundaries separate these subsystems and protect their integrity, while allowing interaction between subsystems. To maintain their structure, family systems have rules that enable them to function productively. Within each unit, individuals play a number of roles, exhibiting a predictable set of behaviors that may be influenced by family of origin, gender and generation within the nuclear family. All family behavior (e.g., roles, communication patterns, symptoms) is presumed to serve a systemic function.

Collaboration among medical providers is central to effec-tive patient care. As medical providers routinely make important decisions in the context of work groups, it is important for health providers to be cognizant of the dynamics of group behavior. Where decisions are being made about such matters as delicate health procedures that have life and death ramifications, efforts should be made to foster a group environment that minimizes the likelihood of faulty group decision-making stemming from group polarization or groupthink phenomena. This process will increase the chances that an integrated biopsychosocial strategy will be adopted and maintained.

Cognizance of group process also is important in fam-ily medicine, where major patient-care decisions often are best managed by involving patients, their families and health care providers in a collaborative process (McDaniel et al., 1992). Given the systemic phenomena that typify family functioning as described above, the family context within which illness progres-sion unfolds is a key component in developing and implementing effective treatment strategies as well as maximizing treatment adherence. Further, families can provide significant social sup-port resources for patients living with illness-related challenges.

Groups can serve an important social support function for individuals with severe illnesses. One example is the peer-led support group. Such groups include members who share common concerns, and tend to be characterized by group autonomy, self-governance, freedom of expression, equal distributions of power and mutual helping, including problem-solving and support (Forsyth and Elliott, 1999). Clinician-led group psychotherapy also has been shown to benefit patients with diseases such as cancer, both in terms of emotional adjustment and health effects (Spiegel and Kimerling, 2001; Spira, 1997).

Given the profound influence of group involvement on one’s sense of self and interpersonal relationships, it is reasonable to assume that membership in family groups, groups at work or school, or community-based groups are associated with the qual-ity of one’s mental health functioning (Forsyth and Elliott, 1999; Levine and Moreland, 1992). Group involvement often is sought as a means of gaining help in managing personal and social prob-lems. In clinical mental health practice settings, various forms of both group therapy (Yalom, 1995) and family therapy (Gurman and Kniskern, 1981, 1991) have been employed routinely to treat psychiatric disorders.

Psychotherapy groups are organized for the specific pur-pose of dealing with intrapsychic, behavioral and interpersonal difficulties encountered in daily living. For illustrative purposes, a brief review of the interpersonal or transactional approach to group psychotherapy will be presented, as social psychological principles can be applied easily to understanding the nature and efficacy of this commonly used approach. Yalom (1995), who has contributed substantively to the understanding and implemen-tation of psychotherapy groups, posits that groups provide an interpersonal context within which the members manifest their maladaptive interpersonal patterns, receive feedback about these patterns, and gain opportunities to learn new and more authentic modes of relating to others. In this regard, groups function as social microcosms reflecting each participant’s social universe. According to Yalom, there are a number of therapeutic factors that facilitate change in group therapy. These include the instil-lation of hope, universality, imparting of information, altruism, corrective recapitulation of the primary family group, develop-ment of socializing techniques, imitative behavior, interpersonal learning, group cohesiveness, catharsis and existential factors. Forsyth (1991) has evaluated these change factors from a social psychological perspective, suggesting that social comparison,social learning, self-insight, social influence and social provi-sions processes are all relevant to the understanding of change processes in therapeutic groups.

Many social psychological concepts regarding small group behavior may have particular applicability to group psychother-apy. For example, it is essential for the therapist to facilitate es-tablishment of group norms that maximize the likelihood that the therapeutic factors associated with change will exert full influ-ence. Such norms may pertain to group procedure (e.g., attend-ance, participation and communication rules, length, frequency and duration of sessions), communication of support and empa-thy, values (e.g., self-disclosure, honesty, acceptance) and goals (e.g., improved psychological adjustment, enhanced relationship satisfaction). Additionally, group cohesiveness is a key compo-nent to a successful therapeutic group in that group cohesion is associated with acceptance and support among group members, along with the formation of authentic intragroup relationships. Further, high levels of group cohesion are associated with more stable group functioning (Yalom, 1995).

The therapist’s awareness of some potential pitfalls of group decision-making processes also is essential (i.e., group polarization, groupthink). For instance, the group polarization phenomenon (e.g., risky shift) may be addressed effectively by the presence of a cotherapy team rather than a single therapist, as the two therapists may assist group members in arriving at more moderate positions (Yalom, 1995). Careful attention to mini-mizing the conditions under which groupthink may occur also is important in order to sidestep potentially catastrophic group decisions. In this regard, it is crucial that group leaders monitor their own inclinations to dominate group processes and suppress intragroup dissent.