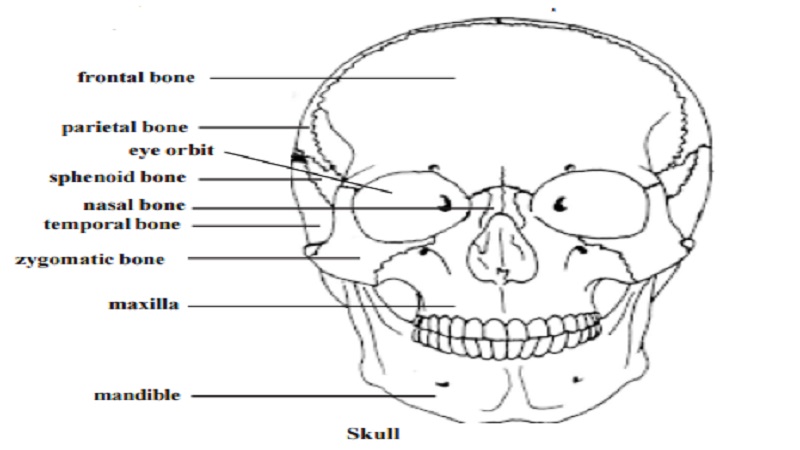 The human cranial capacity is about 1500 cm3. It consists of 22 bones. It protects the brain. It supports the organs of vision, hearing, smell and taste. The lower jaw or mandible remains specially attached to the skull.

The human cranial capacity is about 1500 cm3. It consists of 22 bones. It protects the brain. It supports the organs of vision, hearing, smell and taste. Thelower jaw or mandible remains specially attached to the skull. The skull or cranium is covered by eight bones. They are one pair each of parietal andtemporal, individual bones as frontal, sphenoid, occipital and ethmoid. These bones are joined by sutures to form a compact box like struc-ture. The sutures are immovable joints.

In the front there are 14 facial bones. Of these maxilla, zygomatic, palatine, lacrymal, nasal and inferior nasal koncha remain as pairs.

Mandible or lower jaw and vomer are unpaired bones .

The parietal and occipital bones are major bones on the posterior side of the skull. The parietal bones are joined to the occipital bone at the back. The side of the head is formed of the parietal and the temporal bones. The large hole in the temporal bone is the external auditory meatus. This opening is meant for transmitting sound waves towards the eardrum. On the lateral side immediately anterior to the temporal, the sphenoid bone is seen. Anterior to the sphenoid bone is the zygomatic bone or cheek bone. It is a prominent bone on the face. The upper jaw is formed of the maxilla. The mandibleconstitutes the lower jaw.

The major bones seen from the frontal view are the frontal bone, zygomatic bone the maxillae and the mandible. The most prominent open-ings in the skull are the orbits and the nasal cavity. The two orbits are meant for accommodating the eyes. The bones of the orbits provide protection for the eyes and attachment points for the muscles that move the eyes. The bones forming the oribits are the frontal, sphenoid, zygomatic, maxilla, lacrymal, ethmoidand palatine. The head region also contains 6 ear ossicles. They are Maleus (2), incus (2) and stapes (2).

A large opening found at the base of the skull is the foramen magnum. Through this opening the medulla oblongata of the brain descends down as the spinal cord.