The dermis lies between the epidermis and the sub-cutaneous fat. It supports the epidermis structurally and nutritionally. Its thickness varies, being greatest in the palms and soles and least in the eyelids and penis. In old age, the dermis thins and loses its elasticity.

The dermis interdigitates with the epidermis (Fig. 2.1) so that upward projections of the dermis, the dermal papillae, interlock with downward ridges of the epidermis, the rete pegs. 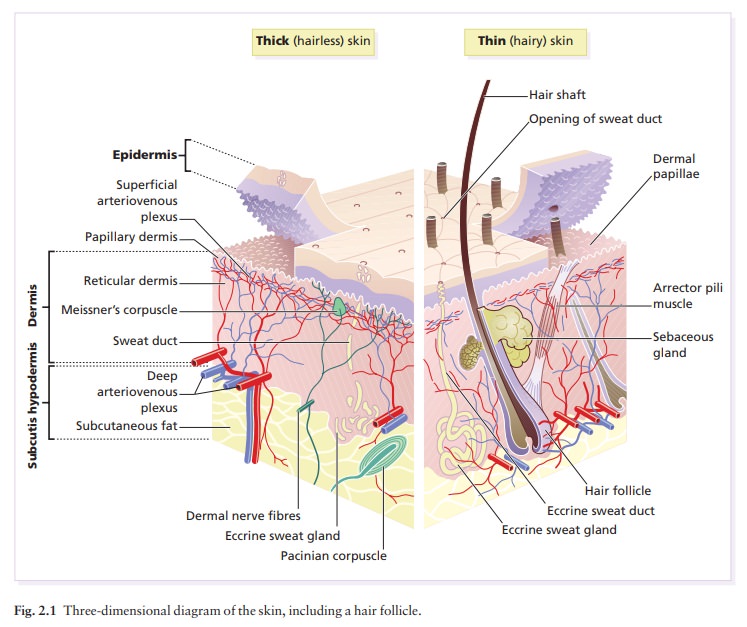 This interdigitation is respons-ible for the ridges seen most readily on the fingertips (as fingerprints). It is important in the adhesion between epidermis and dermis as it increases the area of con-tact between them.

Like all connective tissues the dermis has three com-ponents: cells, fibres and amorphous ground substance.

Cells of the dermis

The main cells of the dermis are fibroblasts, but there are also small numbers of resident and transitory mono-nuclear phagocytes, lymphocytes, Langerhans cells and mast cells. Other blood cells, e.g. polymorphs, are seen during inflammation.

Fibres of the dermis

The dermis is largely made up of interwoven fibres, principally of collagen, packed in bundles. Those in the papillary dermis are finer than those in the deeper reticular dermis. When the skin is stretched, collagen, with its high tensile strength, prevents tearing, and the elastic fibres, intermingled with the collagen, later return it to the unstretched state.

Collagen makes up 70–80% of the dry weight of the dermis. Its fibres are composed of thinner fibrils, which are in turn made up of microfibrils built from indi-vidual collagen molecules. These molecules consist of three polypeptide chains (molecular weight 150 kDa) forming a triple helix with a non-helical segment at both ends. The alignment of the chains is stabilized by covalent cross-links involving lysine and hydroxylysine. Collagen is an unusual protein as it contains a high proportion of proline and hydroxyproline and many glycine residues; the spacing of glycine as every third amino acid is a prerequisite for the formation of a triple helix. Defects in the enzymes needed for collagen syn-thesis are responsible for some skin diseases, including the Ehlers–Danlos syndrome, and con-ditions involving other systems, including lathyrism (fragility of skin and other connective tissues) and osteogenesis imperfecta (fragility of bones).

There are many, genetically distinct, collagen pro-teins, all with triple helical molecules, and all rich in hydroxyproline and hydroxylysine. The distribution of some of them is summarized in Table 2.4. 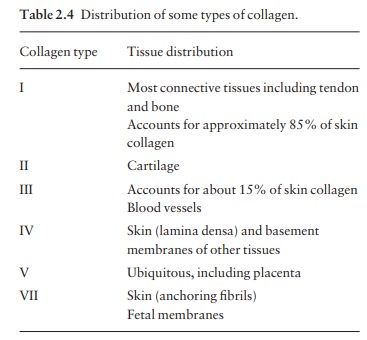 Reticulin fibres are fine collagen fibres, seen in fetalskin and around the blood vessels and appendages of adult skin.

Elastic fibres account for about 2% of the dry weightof adult dermis. They have two distinct protein com-ponents: an amorphous elastin core and a surround-ing ‘elastic tissue microfibrillar component’. Elastin (molecular weight 72 kDa) is made up of polypeptides (rich in glycine, desmosine and valine) linked to the microfibrillar component through their desmosine residues. Abnormalities in the elastic tissue cause cutis laxa (sagging inelastic skin) and pseudoxanthoma elasticum.

Ground substance of the dermis

•   it binds water, allowing nutrients, hormones and waste products to pass through the dermis;

•   it acts as a lubricant between the collagen and elastic fibre networks during skin movement; and

•   it provides bulk, allowing the dermis to act as a shock absorber.

Both smooth and striated muscle are found in the skin. The smooth arrector pili muscles (see Fig. 13.1) are used by animals to raise their fur and so protect them from the cold. They are vestigial in humans, but may help to express sebum. Smooth muscle is also responsible for ‘goose pimples’ (bumps) from cold, nipple erection, and the raising of the scrotum by the dartos muscle. Striated fibres (e.g. the platysma) and some of the muscles of facial expression, are also found in the dermis.

Although the skin consumes little oxygen, its abund-ant blood supply regulates body temperature. The blood vessels lie in two main horizontal layers (Fig. 2.10). The deep plexus is just above the subcutaneous fat, and its arterioles supply the sweat glands and hair papillae. 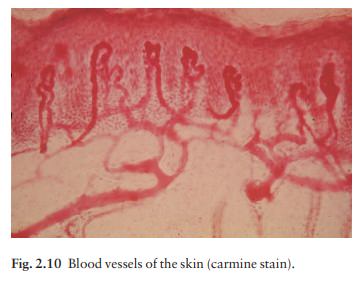 The superficial plexus is in the papillary dermis and arterioles from it become capillary loops in the dermal papillae. An arteriole arising in the deep dermis supplies an inverted cone of tissue, with its base at the epidermis.

The blood vessels in the skin are important in thermoregulation. Under sympathetic nervous control, arteriovenous anastamoses at the level of the deep plexus can shunt blood to the venous plexus at the expense of the capillary loops, thereby reducing sur-face heat loss by convection.

Afferent lymphatics begin as blind-ended capillaries in the dermal papilla and pass to a superficial lymphatic plexus in the papillary dermis. There are also two deeper horizontal plexuses, and collecting lymphatics from the deeper one run with the veins in the super-ficial fascia.

The skin is liberally supplied with an estimated one million nerve fibres. Most are found in the face and extremities. Their cell bodies lie in the dorsal root ganglia. Both myelinated and non-myelinated fibres exist, with the latter making up an increasing pro-portion peripherally. Most free sensory nerves end in the dermis; however, a few non-myelinated nerve endings penetrate into the epidermis. Some of these are associated with Merkel cells. Free nerve endings detect the potentially damaging stimuli of heat and pain (nocioceptors), while specialized end organs in the dermis, Pacinian and Meissner corpuscles, register deformation of the skin caused by pressure (mechanoreceptors) as well as vibration and touch. Autonomic nerves supply the blood vessels, sweat glands and arrector pili muscles.

Itching is an important feature of many skin diseases. It follows the stimulation of fine free nerve endings lying close to the dermo-epidermal junction. Areas with a high density of such endings (itch spots) are especially sensitive to itch-provoking stimuli. Impulses from these free endings pass centrally in two ways: quickly along myelinated A fibres, and more slowly along non-myelinated C fibres. As a result, itch has two components: a quick localized pricking sensation followed by a slow burning diffuse itching.

Many stimuli can induce itching (electrical, chemical and mechanical). In itchy skin diseases, pruritogenic chemicals such as histamine and proteolytic enzymes are liberated close to the dermoepidermal junction. The detailed pharmacology of individual diseases is still poorly understood but prostaglandins potenti-ate chemically induced itching in inflammatory skin diseases.