Antigens are molecules that are recognized by the immune system thereby provoking an immune reac-tion, usually in the form of a humoral or cell-bound antibody response.

Antigens are molecules that are recognized by the immune system thereby provoking an immune reac-tion, usually in the form of a humoral or cell-bound antibody response. Haptens, often chemicals of low molecular weight, cannot provoke an immune reac-tion themselves unless they combine with a protein. They are important sensitizers in allergic contact dermatitis.

Some bacterial toxins (e.g. those released by Staphylococcus aureus) are prototypic superantigens.Sensitization to such superantigens is not necessary to prime the immune response. Superantigens align with a variety of MHC Class II molecules outside their antigen presentation groove and, without any cellular processing, may directly signal to different classes of T cells within the large family carrying a Vβ type of T-cell receptor (Fig. 2.12). By these means, super-antigens can induce massive T-cell proliferation and cytokine production leading to disorders such as the toxic shock syndrome. Streptococcal toxins act as superantigens to activate T cells in the pathogenesis of guttate psoriasis. 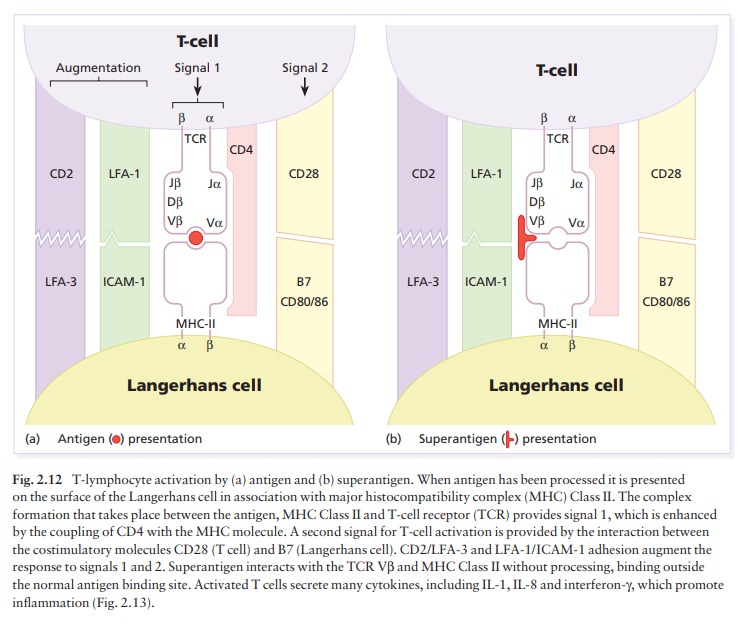 Immunoglobulin G (IgG) is responsible for most of the secondary response to most antigens. It can cross the placenta, and binds complement to activate the classical complement pathway. IgG can coat neutro-phils and macrophages (by their FcIgG receptors), and acts as an opsonin by cross-bridging antigen. IgG can also sensitize target cells for destruction by K cells. IgM is the largest immunoglobulin molecule. It is responsible for much of the primary response and, like IgG, it can fix complement but it cannot cross the placenta. IgA is the most common immunoglobulin in secretions. It does not bind complement but can activate complement via the alternative pathway. IgE binds to Fc receptors on mast cells and basophils, where it sensitizes them to release inflammatory medi-ators in type I immediate hypersensitivity reactions (Fig. 2.14). 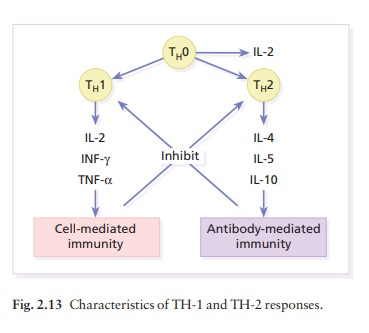 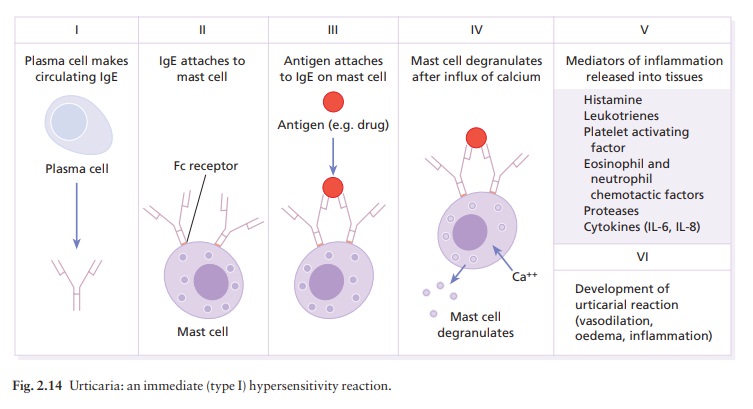 Cytokines are small proteins secreted by cells such as lymphocytes and macrophages, and also by ker-atinocytes (Table 2.2). They regulate the amplitude and duration of inflammation by acting locally on nearby cells (paracrine action), on those cells that secreted them (autocrine) and occasionally on distant target cells (endocrine) via the circulation. The term cytokine covers interleukins, interferons, colony-stimulating factors, cytotoxins and growth factors. Interleukins (IL) are produced predominantly by leucocytes, have a known amino acid sequence and are active in inflammation or immunity. 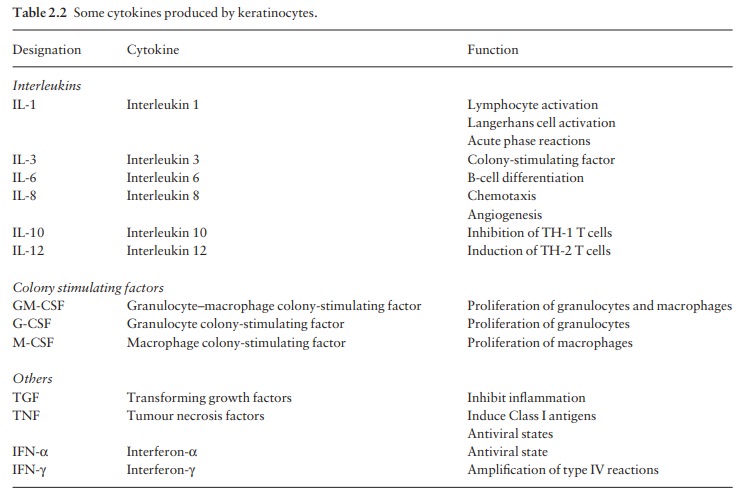 There are many cytokines (Table 2.2), and each may act on more than one type of cell causing many different effects. Cytokines frequently have overlapping actions. In any inflammatory reaction some cytokines are acting synergistically while others will antagonize these effects.

This network of potent chemicals, each acting alone and in concert, moves the inflammatory response along in a controlled way. Cytokines bind to high affinity (but not usually specific) cell surface re-ceptors, and elicit a biological response by regulating the transcription of genes in the target cell via signal transduction pathways involving, for example, the Janus protein tyrosine kinase or calcium influx systems. The biological response is a balance between the pro-duction of the cytokine, the expression of its receptors on the target cells, and the presence of inhibitors.

Cellular adhesion molecules (CAMs) are surface gly-coproteins that are expressed on many different types of cell; they are involved in cell–cell and cell–matrix adhesion and interactions. CAMs are fundamental in the interaction of lymphocytes with antigen-presenting cells (Fig. 2.12), keratinocytes and endothelial cells and are important in lymphocyte trafficking in the skin during inflammation (Fig. 2.11). CAMs have been classified into four families: cadherins, immunoglobulin superfamily, integrins and selectins. E-cadherins are found on the surface of keratinocytes between the desmosomes. γ-Interferon causes up-regulation of Fas on epidermal lymphocytes. Interaction of these with Fas ligand on keratinocytes causes e-cadherins to ‘disappear’ leading to intercellular oedema (spongiosis) between desmosomes. 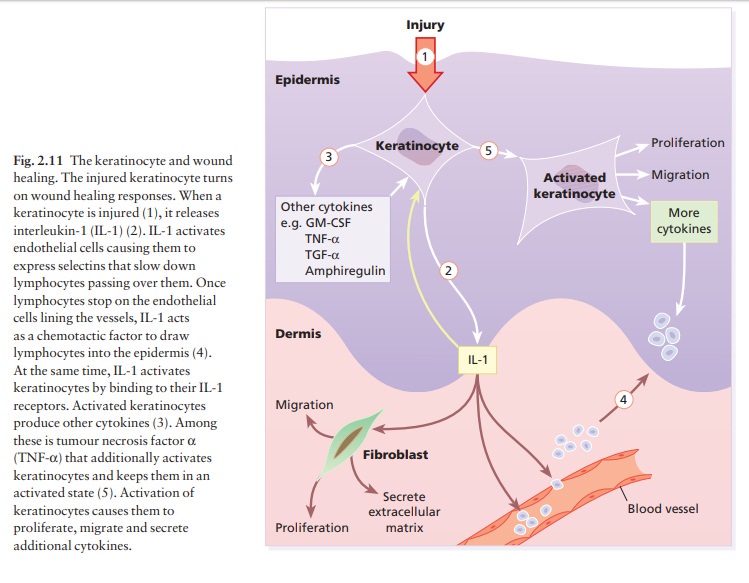 CAMs of special relevance in the skin are listed in Table 2.5. 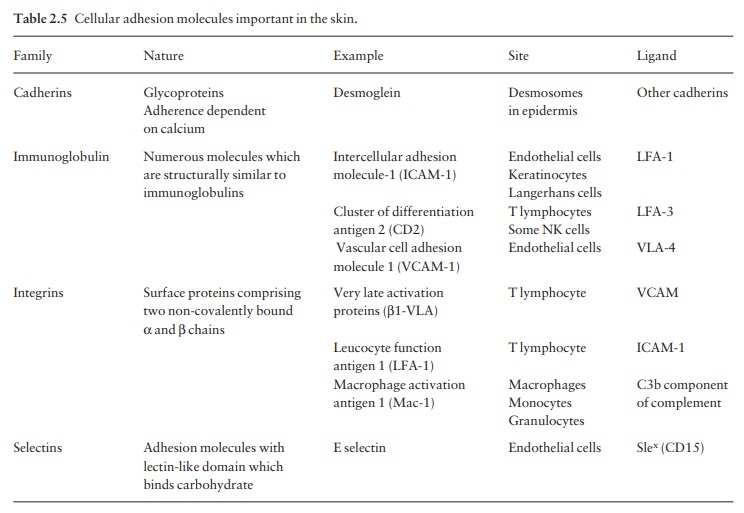 Like other cells, those in the skin express surface antigens directed by genes of the MHC. The human leucocyte antigen (HLA) region lies on chromosome 6. In particular, HLA-A, -B and -C antigens (the Class I antigens) are expressed on all nucleated cells includ-ing keratinocytes, Langerhans cells and cells of the dermis. HLA-DR, -DP, -DQ and -DZ antigens (the Class II antigens) are expressed only on some cells (e.g. Langerhans cells). They are poorly expressed on keratinocytes except during certain reactions (e.g. allergic contact dermatitis) or diseases (e.g. lichen planus). Helper T cells recognize antigens only in the presence of cells bearing Class II antigens. Class II antigens are also important for certain cell–cell inter-actions. On the other hand, Class I antigens mark target cells for cell-mediated cytotoxic reactions, such as the rejection of skin allografts and the destruction of cells infected by viruses.