Like Pthreads, OpenMP is an API for shared-memory parallel programming. The “MP” in OpenMP stands for “multiprocessing,” a term that is synonymous with shared-memory parallel computing. Thus, OpenMP is designed for systems in which each thread or process can potentially have access to all available memory, and, when we’re programming with OpenMP, we view our system as a collection of cores or CPUs, all of which have access to main memory, as in Figure 5.1.

Although OpenMP and Pthreads are both APIs for shared-memory programming, they have many fundamental differences. Pthreads requires that the programmer explicitly specify the behavior of each thread. OpenMP, on the other hand, some-times allows the programmer to simply state that a block of code should be executed in parallel, and the precise determination of the tasks and which thread should execute them is left to the compiler and the run-time system. This suggests a further differ-ence between OpenMP and Pthreads, that is, that Pthreads (like MPI) is a library of functions that can be linked to a C program, so any Pthreads program can be used with any C compiler, provided the system has a Pthreads library. OpenMP, on the other hand, requires compiler support for some operations, and hence it’s entirely possible that you may run across a C compiler that can’t compile OpenMP programs into parallel programs.

These differences also suggest why there are two standard APIs for shared-memory programming: Pthreads is lower level and provides us with the power to program virtually any conceivable thread behavior. This power, however, comes with some associated cost—it’s up to us to specify every detail of the behavior of each thread. OpenMP, on the other hand, allows the compiler and run-time system to deter-mine some of the details of thread behavior, so it can be simpler to code some parallel behaviors using OpenMP. The cost is that some low-level thread interactions can be more difficult to program.

OpenMP was developed by a group of programmers and computer scien-tists who believed that writing large-scale high-performance programs using APIs such as Pthreads was too difficult, and they defined the OpenMP specification so that shared-memory programs could be developed at a higher level. In fact, OpenMP was explicitly designed to allow programmers to incrementally parallelize 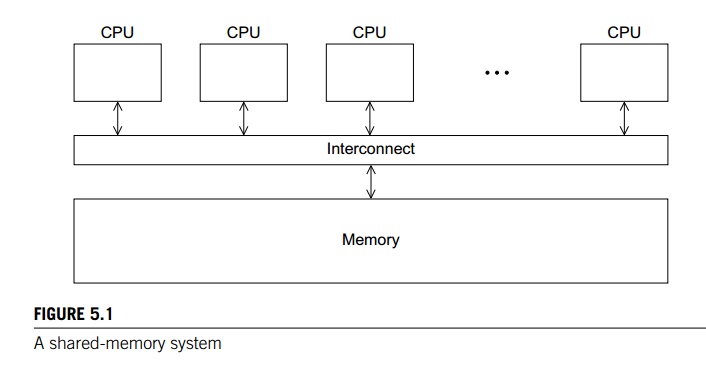 existing serial programs; this is virtually impossible with MPI and fairly difficult with Pthreads.

OpenMP provides what’s known as a “directives-based” shared-memory API. In C and C++, this means that there are special preprocessor instructions known as pragmas. Pragmas are typically added to a system to allow behaviors that aren’t part of the basic C specification. Compilers that don’t support the pragmas are free to ignore them. This allows a program that uses the pragmas to run on platforms that don’t support them. So, in principle, if you have a carefully written OpenMP pro-gram, it can be compiled and run on any system with a C compiler, regardless of whether the compiler supports OpenMP.

Pragmas in C and C++ start with

As usual, we put the pound sign, #, in column 1, and like other preprocessor direc-tives, we shift the remainder of the directive so that it is aligned with the rest of the code. Pragmas (like all preprocessor directives) are, by default, one line in length, so if a pragma won’t fit on a single line, the newline needs to be “escaped”—that is, preceded by a backslash n. The details of what follows the #pragma depend entirely on which extensions are being used.

To compile this with gcc we need to include the fopenmp option:

However, it should be noted that the threads are competing for access to stdout, so there’s no guarantee that the output will appear in thread-rank order. For example, the output might also be

or any other permutation of the thread ranks.

If we want to run the program with just one thread, we can type

and we would get the output

Hello from thread 0 of 1

Let’s take a look at the source code. In addition to a collection of directives, OpenMP consists of a library of functions and macros, so we usually need to include a header file with prototypes and macro definitions. The OpenMP header file is omp.h, and we include it in Line 3.

If you’ve done a little C programming, there’s nothing really new up to this point. When we start the program from the command line, the operating system starts a single-threaded process and the process executes the code in the main function. How-ever, things get interesting in Line 11. This is our first OpenMP directive, and we’re using it to specify that the program should start some threads. Each thread that’s forked should execute the Hello function, and when the threads return from the call to Hello, they should be terminated, and the process should then terminate when it executes the return statement.

That’s a lot of bang for the buck (or code). If you studied the Pthreads chapter, you’ll recall that we had to write a lot of code to fork and join multiple threads: we needed to allocate storage for a special struct for each thread, we used a for loop to start each thread, and we used another for loop to terminate the threads. Thus, it’s immediately evident that OpenMP is higher-level than Pthreads.

Recollect that thread is short for thread of execution. The name is meant to sug-gest a sequence of statements executed by a program. Threads are typically started or forked by a process, and they share most of the resources of the process that starts them—for example, access to stdin and stdout—but each thread has its own stack and program counter. When a thread completes execution it joins the process that started it. This terminology comes from diagrams that show threads as directed lines. See Figure 5.2. For more details see Chapters 2 and 4.

At its most basic the parallel directive is simply

and the number of threads that run the following structured block of code will be determined by the run-time system. The algorithm used is fairly complicated; see the OpenMP Standard [42] for details. However, if there are no other threads started, the system will typically run one thread on each available core.

As we noted earlier, we’ll usually specify the number of threads on the command line, so we’ll modify our parallel directives with the num threads clause. A clause in OpenMP is just some text that modifies a directive. The num threads clause can be added to a parallel directive. It allows the programmer to specify the number of threads that should execute the following block:

It should be noted that there may be system-defined limitations on the number of threads that a program can start. The OpenMP Standard doesn’t guarantee that this will actually start thread count threads. However, most current systems can start hundreds or even thousands of threads, so unless we’re trying to start a lot of threads, we will almost always get the desired number of threads.

Since each thread has its own stack, a thread executing the Hello function will create its own private, local variables in the function. In our example, when the func-tion is called, each thread will get its rank or id and the number of threads in the team by calling the OpenMP functions omp get thread num and omp get num threads, respectively. The rank or id of a thread is an int that is in the range 0, 1, ….., thread count-1. The syntax for these functions is

Since stdout is shared among the threads, each thread can execute the printf state-ment, printing its rank and the number of threads. As we noted earlier, there is no scheduling of access to stdout, so the actual order in which the threads print their results is nondeterministic.

In order to make the code more compact and more readable, our program doesn’t do any error checking. Of course, this is dangerous, and, in practice, it’s a very good idea—one might even say mandatory—to try to anticipate errors and check for them. In this example, we should definitely check for the presence of a command-line argu-ment, and, if there is one, after the call to strtol we should check that the value is positive. We might also check that the number of threads actually created by the parallel directive is the same as thread count, but in this simple example, this isn’t crucial.

A second source of potential problems is the compiler. If the compiler doesn’t support OpenMP, it will just ignore the parallel directive. However, the attempt to include omp.h and the calls to omp_get_thread_num and omp_get_num_threads will cause errors. To handle these problems, we can check whether the preprocessor macro OPENMP is defined. If this is defined, we can include omp.h and make the calls to the OpenMP functions. We might make the following modifications to our program.

Instead of simply including omp.h in the line

we can check for the definition of OPENMP before trying to include it:

Also, instead of just calling the OpenMP functions, we can first check whether_OPENMP is defined:

Here, if OpenMP isn’t available, we assume that the Hello function will be single-threaded. Thus, the single thread’s rank will be 0 and the number of threads will be one.

The book’s website contains the source for a version of this program that makes these checks. In order to make our code as clear as possible, we’ll usually show little, if any, error checking in the code displayed in the text.