When we first encountered the parallel for directive, we saw that the exact assign-ment of loop iterations to threads is system dependent.

When we first encountered the parallel for directive, we saw that the exact assign-ment of loop iterations to threads is system dependent. However, most OpenMP implementations use roughly a block partitioning: if there are n iterations in the serial loop, then in the parallel loop the first n/thread_count are assigned to thread 0, the next n/thread_count are assigned to thread 1, and so on. It’s not difficult to think of situations in which this assignment of iterations to threads would be less than optimal. For example, suppose we want to parallelize the loop

To get a feel for how drastically this can affect performance, we wrote a program in which we defined

In our example, we already know how to obtain the default schedule: we just add a parallel for directive with a reduction clause:

To get a cyclic schedule, we can add a schedule clause to the parallel for directive:

In general, the schedule clause has the form

The type can be any one of the following:

. auto. The compiler and/or the run-time system determine the schedule. runtime. The schedule is determined at run-time.

The chunksize is a positive integer. In OpenMP parlance, a chunk of iterations is a block of iterations that would be executed consecutively in the serial loop. The number of iterations in the block is the chunksize. Only static, dynamic, and guided schedules can have a chunksize. This determines the details of the schedule, but its exact interpretation depends on the type.

For a static schedule, the system assigns chunks of chunksize iterations to each thread in a round-robin fashion. As an example, suppose we have 12 iterations, 0, 1, ...., 11, and three threads. Then if schedule(static,1) is used in the parallel for or for directive, we’ve already seen that the iterations will be assigned as

If schedule(static,2) is used, then the iterations will be assigned as

If schedule(static,4) is used, the iterations will be assigned as

Thus the clause schedule(static, total iterations/thread_count) is more or less equivalent to the default schedule used by most implementations of OpenMP.

The chunksize can be omitted. If it is omitted, the chunksize is approximately total_iterations/thread count.

3. The dynamic and guided schedule types

In a guided schedule, each thread also executes a chunk, and when a thread fin-ishes a chunk, it requests another one. However, in a guided schedule, as chunks are completed, the size of the new chunks decreases. For example, on one of our systems, if we run the trapezoidal rule program with the parallel for directive and a schedule(guided) clause, then when n = 10,000 and thread_count = 2, the iterations are assigned as shown in Table 5.3. We see that the size of the chunk is approximately the number of iterations remaining divided by the number of threads. The first chunk has size 9999=2~~ 5000, since there are 9999 unassigned iterations. The second chunk has size 4999=2 ~~2500, and so on. 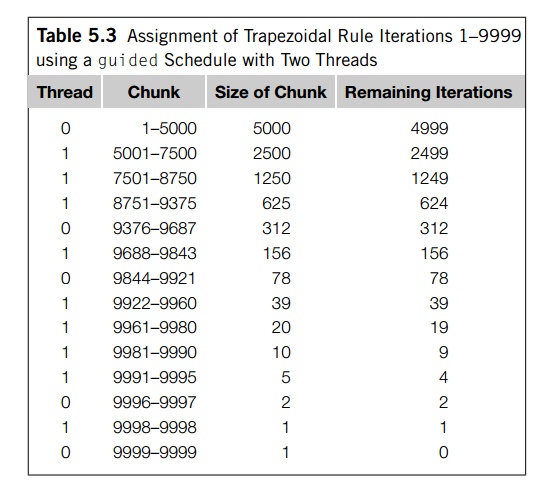 In Windows systems, you can use the command line in an integrated development environment.

As an example, if we’re using the bash shell, we can examine the value of an environment variable by typing

For details about how to examine and set environment variables for your particular system, you should consult with your local expert.

When schedule(runtime) is specified, the system uses the environment vari-able OMP_SCHEDULE to determine at run-time how to schedule the loop. The OMP_SCHEDULE environment variable can take on any of the values that can be used for a static, dynamic, or guided schedule. For example, suppose we have a parallel for directive in a program and it has been modified by schedule(runtime). Then if we use the bash shell, we can get a cyclic assignment of iterations to threads by executing the command

Now, when we start executing our program, the system will schedule the iterations of the for loop as if we had the clause schedule(static,1) modifiying the parallel for directive.

If we have a for loop that we’re able to parallelize, how do we decide which type of schedule we should use and what the chunksize should be? As you may have guessed, there is some overhead associated with the use of a schedule clause. Fur-thermore, the overhead is greater for dynamic schedules than static schedules, and the overhead associated with guided schedules is the greatest of the three. Thus, if we’re getting satisfactory performance without a schedule clause, we should go no further. However, if we suspect that the performance of the default schedule can be substantially improved, we should probably experiment with some different schedules.

In the example at the beginning of this section, when we switched from the default schedule to schedule(static,1), the speedup of the two-threaded execu-tion of the program increased from 1.33 to 1.99. Since it’s extremely unlikely that we’ll get speedups that are significantly better than 1.99, we can just stop here, at least if we’re only going to use two threads with 10,000 iterations. If we’re going to be using varying numbers of threads and varying numbers of iterations, we need to do more experimentation, and it’s entirely possible that we’ll find that the optimal schedule depends on both the number of threads and the number of iterations.

It can also happen that we’ll decide that the performance of the default schedule isn’t very good, and we’ll proceed to search through a large array of schedules and iteration counts only to conclude that our loop doesn’t parallelize very well and no schedule is going to give us much improved performance. For an example of this, see Programming Assignment 5.4.

If each iteration of the loop requires roughly the same amount of computation,           then it’s likely that the default distribution will give the best performance.

If the cost of the iterations decreases (or increases) linearly as the loop exe-cutes, then a static schedule with small chunksizes will probably give the best performance.

If the cost of each iteration can’t be determined in advance, then it may make sense to explore a variety of scheduling options. The schedule(runtime) clause can be used here, and the different options can be explored by running the program with different assignments to the environment variable OMP_SCHEDULE.