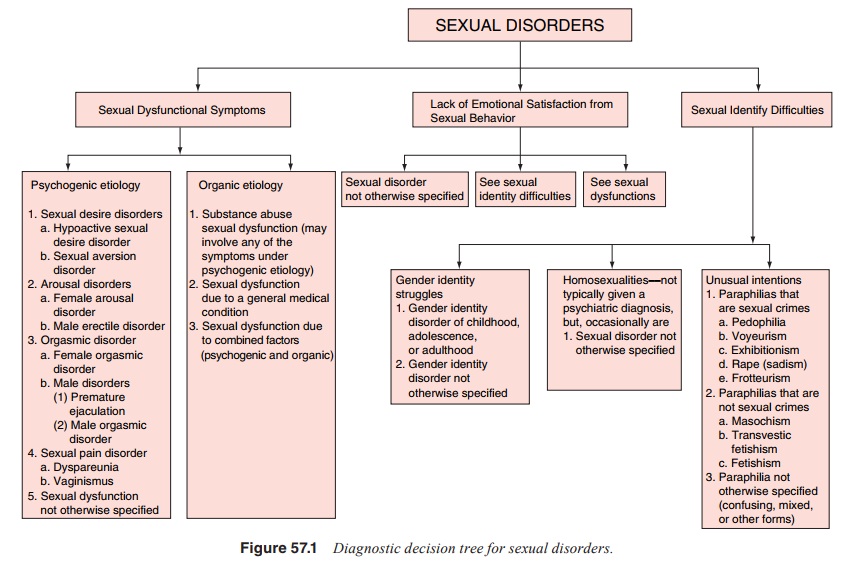 A wide array of sexuality topics impact psychiatry. These top-ics range from those constituting a major social burden, such as teenage pregnancy, sex crimes and sexually transmitted diseases, to those involving ethical and moral values, such as abortion, extramarital affairs, commercial sex industries and crossing sexual boundaries with patients. They include those with a developmental or medical focus, such as sexual dysfunc-tion or sexual dysfunction due to substance abuse or medical conditions, and those involving lifestyles, such as sexual mi-nority status and drugs for sexual enhancement. There are also those that center on psychiatry’s undisputed responsibility, such as psychotropic medication-induced sexual dysfunction and the sexual consequences of psychiatric illness. No discipline, no ideology, no religion and certainly no textbook is suffi-cient fully to understand and encompass the myriad expressions of human sexuality.

Psychiatry has known for almost a century that child de-velopment lays the foundation for a wide variety of adult sexual outcomes (Freud, 1905). These are reflected in the variations of gender, orientation, intention and ease of sexual expression with chosen partners. Psychiatry has also been long aware that the conduct of adolescent and adult sexual life is laden with concern, and sometimes anguish, in every person. In the last generation, we have acquired greater convictions about the profound public health implications of several sexual patterns. First came aware-ness of the high incidence of childhood sexual abuse and its long-term consequences. Then came the data showing that some psychiatrists and other trusted professionals engaged in genital intimacies with patients. Psychiatry responded by unambigu-ously clarifying our ethical standards. At about the same time the AIDS epidemic led to a greater awareness of the lives of ho-mosexual and bisexual men. In the 1990s when the Internet us-age grew without regulation, addictions to at-home pornography appeared. As the use of SSRIs became widespread, psychiatrists learned about their negative sexual impact. In 1998 an effective pill for erectile dysfunction created an explosion of media inter-est across the world. The Viagra story reminded us that sexual function is really important to people.

Psychiatry prides itself about being the only field that can comprehend the biopsychosocial aspects of illness. We under-stand that all sexual expression is simultaneously constituted by biological, psychological and social forces. We also know that sexual disorders are a high prevalence, high incidence source of personal suffering, affecting almost every person at some time in the life-cycle. Sexual disorders often play a subtle role in the genesis of other psychiatric disorders as presented in Figure 57.1 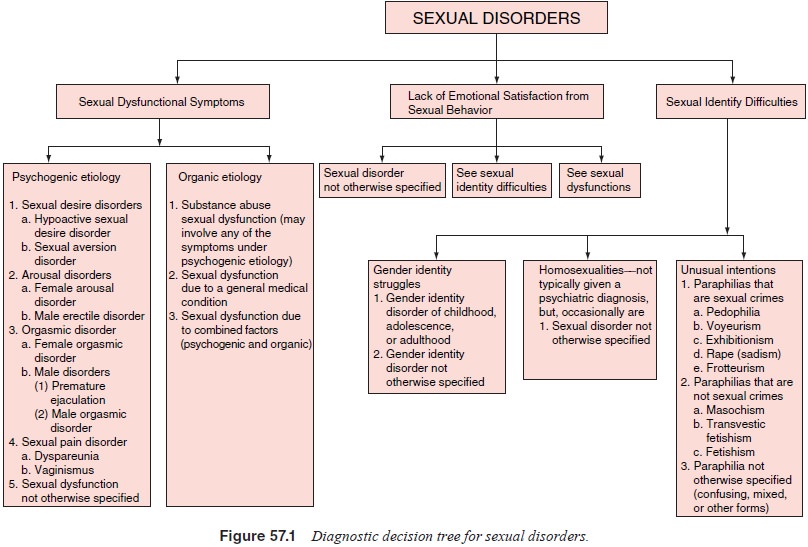 Patients assume their psychiatrists know about sexuality. Therapists can be helpful to many individuals and couples with these problems if they have an interest in the area, a comfort with the subject and a modest fund of knowledge. Sometimes the help can be given quite efficiently. The assistance is often based on knowledge of the diverse origins of these problems. To be able to treat a broad range of sexual disorders the psychiatrist needs to be diagnostically competent, skillful with medications and will-ing to engage in psychotherapeutic processes.

The Components of Sexuality

An adult’s sexuality has seven components – gender identity, ori-entation, intention (what one wants to do with a partner’s body and have done with one’s body during sexual behavior), desire, arousal, orgasm and emotional satisfaction. The first three com-ponents constitute our sexual identity. The second three com-prise our sexual function. The seventh, emotional satisfaction, is based on our personal reflections on the first six (Table 57.1). The DSM-IV-TR designates impairments of five of these compo-nents as pathologies. Variations in orientation and the failure to find ordinary sexual experience emotionally satisfying, although problems for some, are not designated as “disorders”. 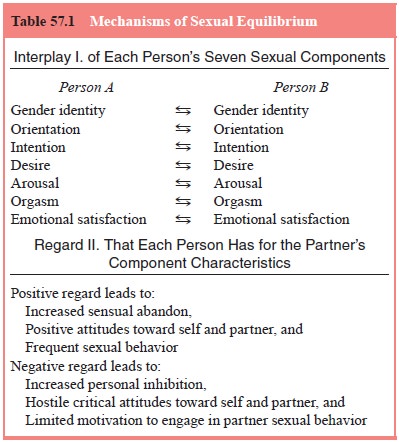 Sexual Development Through the Life-cycle

While the psychological foundations for a healthy sexual life are laid down during childhood through parent–child relationships, each subsequent phase of life – adolescence, young adulthood, middle-life, and older age – has inherent developmental chal-lenges and potentials. The normal tasks of sexual development at each phase provide the clinician with an understanding of age-related etiologies of sexual disorders. Adolescent sexual trou-bles often reflect difficulties consolidating a personally accept-able sexual identity. Young adult dysfunctions often indicate the presence of psychological obstacles to growing comfortable as a sexual pleasure-seeking, pleasure-giving person while integrat-ing sex into the larger context of human attachment. Middle-life disorders often represent failures to maintain psychologi-cal intimacy and diplomatically to negotiate tensions within an increasingly complex interpersonal relationship. The dysfunc-tions of older persons often represent failures to preserve sexual function in the face of biological assaults of menopause, aging, illness, medications, radiation and surgery. Most etiologic fac-tors can operate in another epoch as well. For instance, a young person’s new indifference to sexual behavior may be due to an SSRI or an older person’s new marriage may expose previously avoided personal discomfort with receiving and giving sexual pleasure